World of Warcraft ray tracing was recently added to the Shadowlands alpha, which should allow players with high-spec builds to benefit from improved visuals.

The news comes from popular World of Warcraft information site Wowhead. Apparently World of Warcraft ray tracing settings can now be viewed in the Shadowlands alpha, but aren't yet available for players to enable.

"While WoW has always been able to run on a variety of PCs, including low-end older machines, the Ray Tracing options should be welcome news to players that want better performance and graphics on modern computers," the post notes.

"When this option is enabled, players using Nvidia video cards that support the RTX technology should have access to more realistic looking shadows when using this technology," it continues. "It is important to highlight that this option will likely not be available to players without RTX-enabled Nvidia Graphics Cards."

The post also includes screenshots highlighting the ray tracing option in-game, courtesy of a user who goes by the handle "Jaydaa." 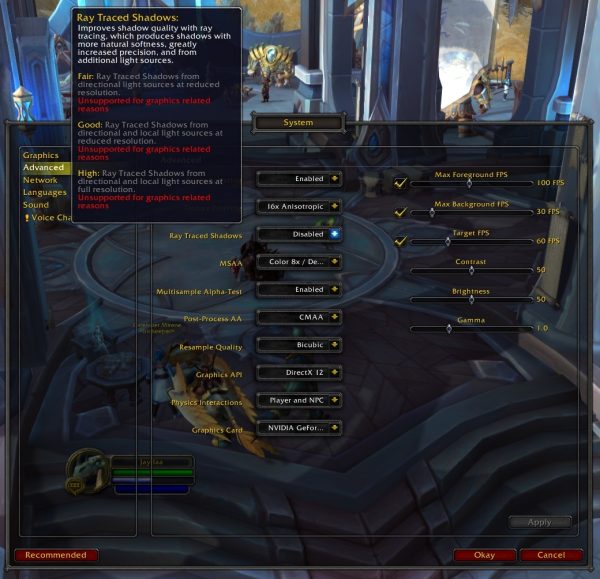 In other Shadowlands developments, it appears the upcoming World of Warcraft expansion will be the first entry in the series' history to actively facilitate controller support. As Sherif Saed noted in a previous VG247 article, it doesn't seem like Blizzard intends to make the expansion completely controller-compatible, but is instead seeking to improve accessibility options for players with disabilities.

In related news, Blizzard recently announced that it's still too early to know whether or not BlizzCon 2020 will go ahead. Also, here is a hill that is also an ass, complete with asshole, in World of Warcraft.

"This isn’t exactly the freshest or most relevant news and it certainly isn’t important or worth writing about, but there is a hill that is also an ass in World of Warcraft," the post reads.

"I repeat: there is a hill that is also an ass in WoW."

World of Warcraft: Shadowlands is scheduled to launch later this year.