WildStar is the first MMO from the ex-Blizzard developers at Carbine Studios. VG247's Dave Cook speaks with the team about why a content arms race is changing the face of MMO development.

Developed by Carbine Studios, Wildstar is an MMO set on the contested planet Nexus.

The planet is locked in a war between the imperialistic Dominion group and a band of rebels called The Exiles.

Work on Wildstar began in 2007 and the team was formed by around 20 former Blizzard members who worked extensively on World of Warcraft.

The game's last two races were unveiled this month. Check out the announcement trailer here.

Be it through patches, expansions or DLC, it's not uncommon to see games bolstered after they've launched. Publishers have developed a real appetite for add-on content as a means of encouraging long-tail sales, and to stop gamers from leaving a brand in search of something new.

This is most apparent in the MMO scene where, due to the high price of developing games like World of Warcraft and Guild Wars 2, developers need to constantly give players a reason to return in order to recoup costs, but at a time where free-to-play MMOs run hot studios need increasingly effective propositions to keep people interested.

Unless these games offer players the incentive to return, they'll simply go elsewhere, and this demand for fresh, appealing content has given rise to what WildStar producer Jeremy Gaffney described to me as an update arms race. It's also why Carbine Studios' debut MMO is targeting frequent and substantial content drops after it launches later this year.

"In China they went for the sort of normal three-month patch cycle for most of their games," Gaffney said of the Chinese MMO scene, "which is kind of similar in Korea, the US and Europe. Then some bright group was there who said, 'We're going to do it in two months', and they got more users, then someone else was like, 'We'll do a big update in a month'.

"Of the successful games; they're updating weekly or bi-weekly now. It's like this arms race for how much new stuff can you add in the game, because it turns out people crave it. Same stuff you see with League of Legends; every three weeks, cool new stuff. Guild Wars 2 has just moved to a two-week cycle and that's brilliant. Players really reward that, but as a developer it's very hard to do that.

"We've tooled from an early stage to try and have that rapid update cycle. We've been believers for quite a long while that frequency of quality updates is something that players really reward. I don't know that you sell more boxes you know what I mean? It's not going to be like a line on the box or show up in a review but by god you stay in a game that's making more of the stuff that you love."

Check out this fun Wildstar trailer to get a feel for the game's funnybone.

It's a common sense approach on the surface, but it's fraught with high-strain demands for any developer. It's lucky then that Carbine was founded by around 20 former World of Warcraft developers at Blizzard who have been steeped in MMO development for many years. They know the pitfalls, they've seen games collapse and there's a genuine passion and understand of what makes gamers invest time and money into an online world.

WildStar certainly has an identity that stands out among today's glut of fantasy MMOs that often tend to cover similar themes, races and class archetypes. It sees the imperialistic Dominion faction and a band of rebels called the Exiles fighting over the newly-discovered planet Nexus. There's a neat sci-fi vibe at play along with smatterings of comedy and a bright colour palette, but the plot also hides a darker edge.

Gaffney explained that the Carbine has taken note of many stumbling blocks of the MMO genre over the years and ironed them out through smart design. For example, he said that it makes no sense to have a dynamic event where two factions engage in PvP battle over two strongholds when you can make the bases two giant, rampaging robots instead. It's no secret which of the two presentations is more appealing.

"We build the whole world to be modifiable," Gaffney explained when I asked him about new dynamic content, post-launch updates and world events. "We mark areas with plugs and sockets, and it's what lets us do a cool housing system where you can dig gardens, mines and all that kind of stuff. It's what lets us do war-plots where you build your fortress and walls, capture raid bosses and pin them down and all that.

"That same tech lets us do both dynamic events and lets us add stuff to the game very rapidly. We can basically flag an area of our world and swap it in and out with other areas of world trivially, so it lets us do big updates like that quite nicely. We're going to put everything in beta and see what the fans like, because they really run the show at the end of the day rather than us." 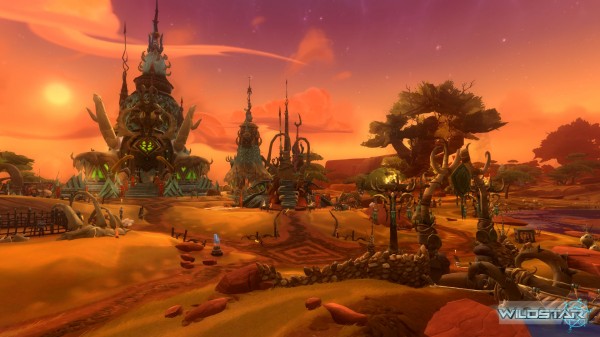 Gaffney stressed that while additional content geared towards faction or group play is of interest to Carbine, the studio would like to progress the overarching world story through regular solo updates after launch. He then added that you can't exactly follow much of an add-on story in a raid with 40 beasts or PvP opponents breathing down your neck. This personal solo experience is where Carbine's long-tail focus lies, but that doesn't rule out new group content either.

"60% of people play massively single player mode," Gaffney continued, "they don't group, they don't do any of that stuff. They just want to play in a big world but not necessarily do all this social crap. Well, that 60% of people are kind of voting with their feet on that so why not support them with solo content and not just have everything be group content?"

I asked Gaffney if relaxed patching regulations on both PS4 and Xbox One will result in a sharp increase in MMOs on consoles given the desire of many studios to regularly patch-in new content. The launch of titles like DC Universe Onlne, Dust 514, Happy Wars and the impending release of DriveClub and Warframe on PS4 suggest that a sea change is slowly building momentum.

"It's going to take off at some point," he replied. "It'll take off when you are guaranteed to have a [large] hard drive on a machine - which it seems this generation has gotten much better at - when you can patch frequently because, a lot of the barriers between MMOs and consoles to date has been, if you can't patch a game regularly and there's a huge approval process you're screwed. 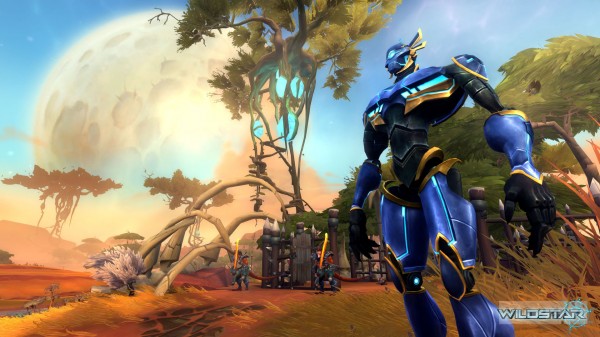 Gaffney added that if you're a publisher without the business model to make money for yourself in the MMO space then it's a no-brainer if you decide to skip consoles in favour of PCs, but he felt that the next-generation of consoles seems better suited to treating MMO developers fairly, and in accommodating their need to constantly update. As for WildStar however, it's purely a PC game for now.

"We're going to do PC first because we love PC," Gaffney explained, "and we think you should do the things you love first. We may branch out onto consoles some day but in general now we want to own the PC market more than we're heading after console."

You need only look at how frequently updates for Guild Wars 2 roll out, such as recent world event Bazaar of the Four Winds, as well as the way constant additions to non-MMO games like League of Legends and Dota 2 work effectively in retaining a game's fan base. In many ways the hardest part isn't in creating and launching an MMO, it's figuring out how to stop it from dying before it matures.

I've often heard that constant iteration is the key to crafting a solid MMO experience that stands the test of time. It's clear to me that Gaffney and the Carbine team understand that explicitly, so it'll be interesting to see just how malleable and updated the game will be once it eventually launches, and how successful it is in keeping people along for the ride.

What's your take on WildStar? Do you like what you've seen so far? Let us know below.