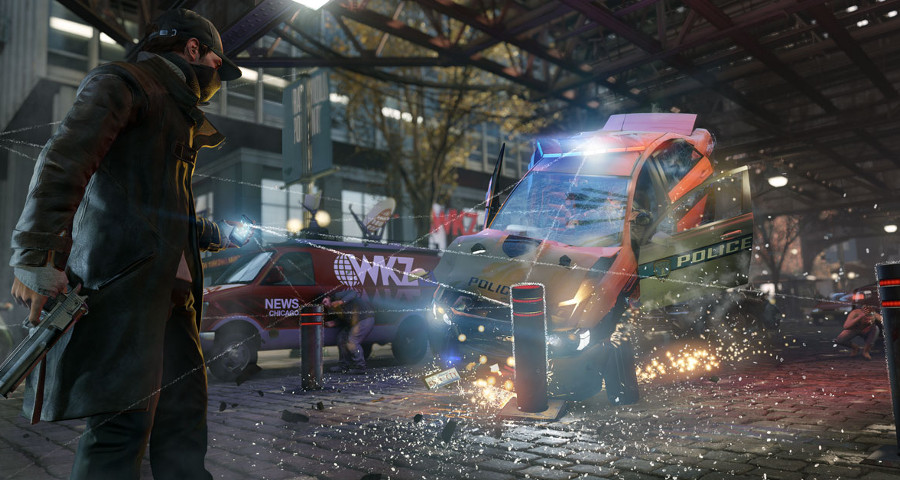 It's a rule of thumb that if you're going to make a sandbox experience that the setting has to take on a life of its own. There's no sense in crafting a vast play-space to then fill it with crap nobody wants to use. This is precisely why Ubisoft Montreal has created a depiction of Chicago governed by software, and why you play as hacker Aiden Pearce. You're a master of that world, bending it to your whim and disrupting the natural order. It's a power trip that players will likely warm to once they realise the potential at hand.

I spoke with Morin about how the team researched its world recently. It was a fascinating discussion, and it went a little something like this:

VG247: So first of all, I'd like to pick up on something that Ubisoft Montreal has been touting for some time now, and that's the way the city and its civilians react to Aiden's actions. How central to the game's DNA is that philosophy?

Jonathan Morin: “I think it's very important actually. One of the core pillars of the game is exactly that feature you're describing there. If you really want to make your sandbox efficient you really want it to respond to what you do. That's also why hacking everything around you became a big deal for us. By having this kind of control over everything, you can have players tap directly into systems, directly into the lives of citizens. That creates an extra layer of fun and sandbox exploration that I think is really interesting.”

VG247: So how closely did you research the real Chicago? I mean, I hear all the time, 'We sent a team to this city and took a million photos,' but what else does it involve? How far did you go?

Morin: “We did a lot of digging actually on many levels. We haven't replicated the city exactly. There are spots that are definitely the same, and others we had to have freedom to make sure the gameplay was great and all of that. But we went there for buildings, structures, textures and all of that, but also we went there for the sound, the ambience of the city, and recording of the citizens to make sure we had the right accent,”

VG247: You just stopped people in the street?

Mornin: “Yeah definitely. We also went out with the cops in Chicago, out on rides with them. Our writer went there, he changed - literally changed - some of the parts that the cops say.”

Morin: “Yeah, so there were a lot of little details like that which we thought was a nice way of bringing the place alive.” 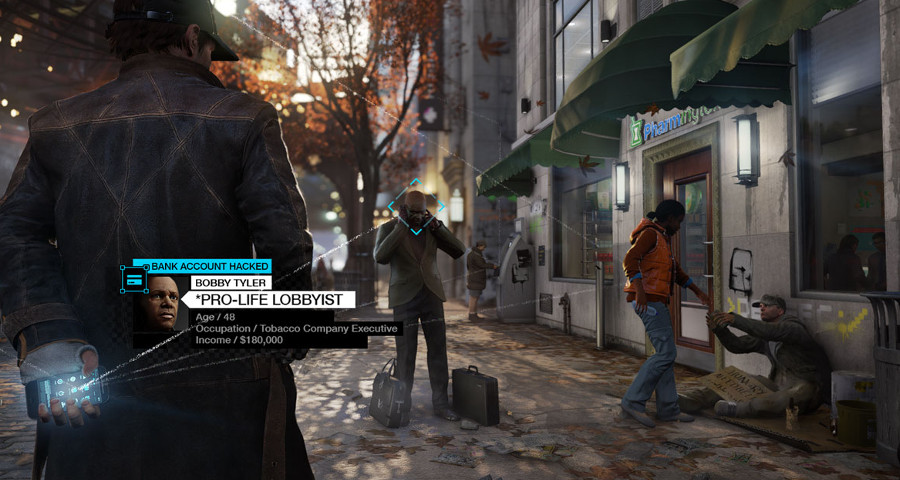 VG247: I'm intrigued by the police ride-alongs. So they'd get a dispatch and you'd actually be there with them?

Morin: “It was partly that. It was also understanding the city through the eyes of the cops, as they have a very interesting eye of the place. Where is most dangerous, what's going on with those guys, and we even asked them some weird questions like which TV show represents their job the best, because there's so many cop shows out there. The Wire was one of the answers by the way, but it was just questions for us to see if our references were any good. There was tons of different things that we did.”

VG247: Did you also collect 'human' stories from the general public?

Morin: “Definitely some of the stories are inspired by Chicago. Two things we did were research the back-story of Chicago, and we have apps on our [in-game] phone that can get you some information on the city – similar to apps you can get in real-life today – so we can give you more information about the place, and you can learn more about the city at the same time.

“The music as well, like the kind of music that is playing out there; we did the extra mile to make sure there we had a lot of bands – sometimes more obscure and underground from Chicago.”

“You know, when you do a game you always want to make sure that what you put in is to the service of the game. I think GTA has a great fantasy and everything they put in it reinforces that fantasy. What you don’t do is start copying or start feeling the pressure of your neighbour like, ‘Oh my god we need a chopper.’”

Morin: “Exactly, so we could have the full package.”

VG247: So there's a significant authenticity in there from an environmental perspective. What about the tech? How far in the future is Watch Dogs set?

Morin: “For us we went just on the line, but everything in Watch Dogs exists, like the hacking stuff you can do is possible – not at the press of a button – but they are possible. Smart cities exist, like Rio De Janeiro is using that for the Olympics, so we're slowly getting into Watch Dogs, but in reality.

VG247: So everything is based in reality. What did you learn from speaking with security firms?

Morin: “Oh yeah, I don't remember their name but we had a consultant, a group of security guys, like expert security analysts. We sent them a bunch of stuff to make sure that what we were doing was possible. Sometimes it was about the language, words that we used, and sometimes we had to back up a bit about certain words because players were confused.”

Morin: “Yeah, too hard to get in the first try, but yeah it was a nice process.”

VG247: And presumably you spoke with hackers as well?

Morin: “Oh they have a fascinating culture. It's a very misunderstood culture and we express this quite a bit in Watch Dogs.”

VG247: Hackers have been known to bring down sites or to break things to make a statement. Do you see Watch Dogs as a statement about the technical world we live in, the NSA, PRISM or anything like that?

Morin: “Now that it's happening, it's not surprising, but I mean there's no way we could have tied all of that together. The only thing we did was digging through the internet. Our main reference source was reality and what's going on during today, and it turns out that a lot of stuff we did dig in to, a lot of that stuff emerged from the surface a couple of years afterwards.

“I guess the fact that it took five years for us to get that stuff into the game gave the time to reality to catch up and bring some of that stuff to the surface. It was quite exciting for us to see happening.” 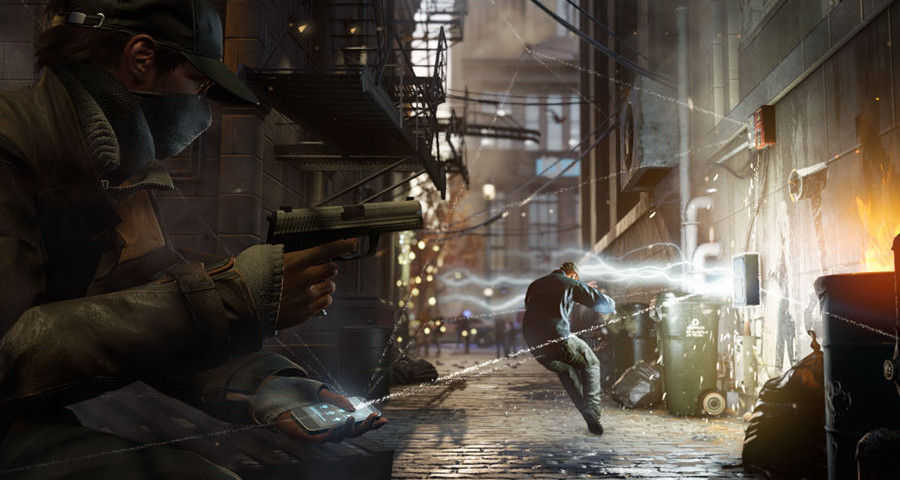 VG247: It's almost like you've sort-of predicted the future [laughs].

Morin: “Yeah I know, it's kind of weird. Many times we saw stuff in the news that we had done in the game or raised in the game like two weeks before it happened. It happened too often so we were like, 'let's stop brain-storming.' It felt weird.”

VG247: So right back at the start of the project five years ago, were you ever wary that whatever you were going to predict or represent as the near-future may have been proven wrong or discounted in any way?

Morning: “We didn't know it would be five years necessarily, but we knew we were in for something new and to push some things forward. When you start something like that there's no real timeline, so you go with results.”

As in working iteratively on ideas that work?

Morin: “Exactly. The best way to not lose track of what the hell's going on is to constantly have results. We prototyped a lot, we wanted to always have something tangible, so that way you can show what you've got and you get more in return.

“That's a loop that happens where you get can progressively see what's wrong, or what the team liked a lot, and then they respond to the possibilities. That's how we ended up at E3 2012. At some point we made a decision; 'Okay, let's make this happen,' and then afterwards it was all about secrecy and making sure we knew what to do about it.”

VG247: Yeah that E3 2012 reveal was great because nobody knew it was coming. It was different in that it seemed to be rooted in a very 'real' setting. Did you always wanted to stay rooted in the realm of possibility? On the other hand GTA 5's world lets you do all sorts of crazy things.

Morin: “You know, when you do a game you always want to make sure that what you put in is to the service of the game. I think GTA has a great fantasy and everything they put in it reinforces that fantasy. What you don't do is start copying or start feeling the pressure of your neighbour like, 'Oh my god we need a chopper.'

“It's always been very important for us to say … for us some stuff is inevitable, like we need cars. If you don't drive it's going to take a long time. So you do need those obvious things, but afterwards it was all about hacking, or what you want to do, and it's constantly got to be about that. It doesn't mean we couldn't have put in a chopper or something else in, but it would have always have been – if we had done it – because it fits or there's one cool thing about hacking we could do with it.

“It's always about reinforcing our fantasy so that the player is not disappointed. Players are good at asking. I get bombarded on Twitter like, 'Oh, can you buy real estate? Can you do it?' and they ask all those questions. It's funny because on one side it's cool that they want to know what's going on in the game, but on the other I'm curious. I ask, 'Why are you asking me if you can do stuff you already did? Why are you not asking me about the stuff you've never done?'

“It's funny. People talk about what they know, so instead of saying, 'What else is in Watch Dogs, that is not possible in other games?' they go [points at water bottle], 'Oh I tasted that water, it was great. Do you have water in your game? [laughs]. It's funny. I just find it funny.”