Streets of Rage 4 crunches. It's at its best when you're throwing goons around the screen, tossing pipes at punks and tasering crooked cops. It feels like barely controlled chaos as you bounce around the littered streets, rats fleeing, bad guys leaping out of manholes into your waiting fists. Enemies hit the concrete hard. They go down with a crunch.

You smack flamboyant idiots in the face, one after another, and watch them blink out of existence. They keep coming back for more. It feels radical. You deliver justice for the city with bare knuckles and improvised weapons. Broken bottles, a hammer, a spiked baseball bat. It's a punk rock, fuck you attitude to anyone who gets in the way.

At times it's close to anarchy. The city is rioting and you're not the only one fighting crime. Cops swing at crooks inside a trashed police station, and you interrupt both with a flying boot to the spine. You smash up an art gallery, pummel arcade machines, get down and dirty in the sewers, throw goons out the back of a plane, headbutt at a rock concert. There's nothing better than taking a weapon off a dirty cop and smashing it over his skull in revenge.

You get your ass-kicked too, but it doesn't matter because you keep steamrollering forward, left to right, as punks jump up to get beat down. Every punch connects with a sharp crack. It's audio dynamite, a percussion of whacks and snaps accompanied by an electro soundtrack from the original composers. In more ways than one, Streets of Rage 4 slaps like a MFer.

Of course it's a repetitive game. It's a side-scrolling beat 'em up. It's 1992 all over again. They don't make them like this anymore, outside of retro indie pixel offerings, because there's barely an audience for them. Or the genre died out. Or people just assumed there's no audience for them. Whatever the reason, Streets of Rage 4 does a superb job of blending the old and the new. This repetition is a rhythm, and it's so easy to slip into it and play along, it becomes intoxicating quickly. 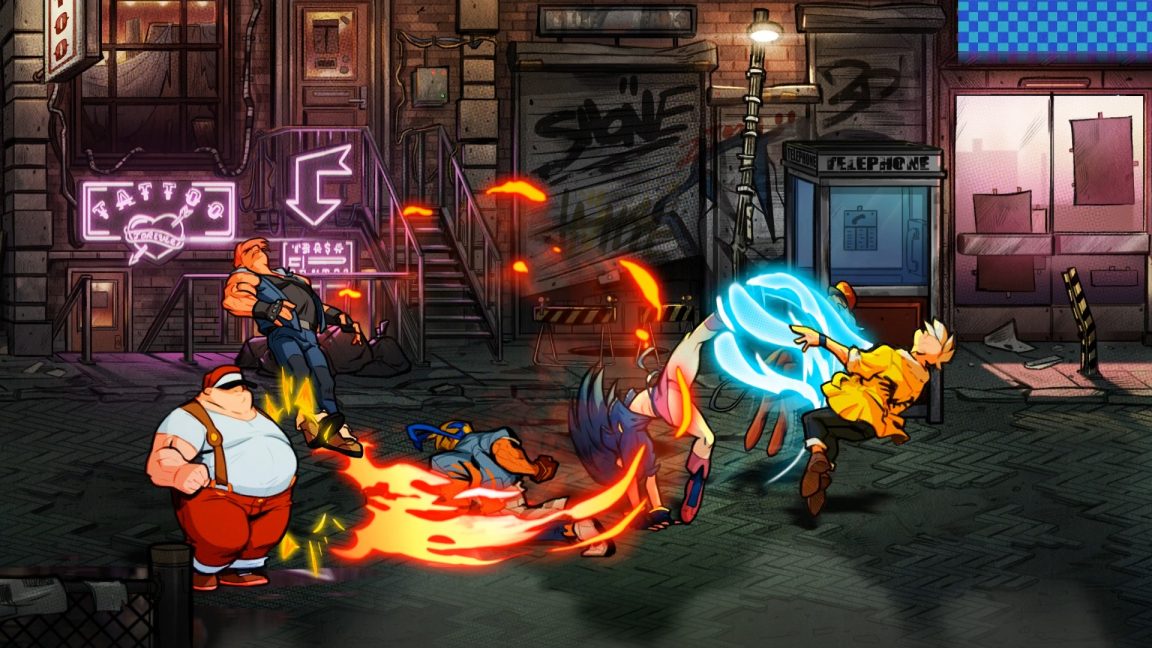 The new art style is slick and suitably comic book. It's not afraid of using every colour in the Sharpie box but still sticks to the original palette from previous Streets of Rage games. Character design updates add a visual flair of their own. The riot cops with their glowing shields, Diva and her electric python. The ass-kicker with his hands in his pocket looking nonchalant before he leaps for your face like the malicious little bastard he is. Motorbike helmets, spikes, whips, and dayglo leather jackets like it's a kinky rave. It's a confident style, a sassy teenager in its prime; beautiful and cocky in youth.

Gameplay doesn't vary much between characters but there's welcome replayability whether upping the difficulty, nudging that high score up, improving your rank, or playing alongside friends. Co-op play in particular lifts Streets of Rage as you juggle enemies between each other, throwing bodies around with slapstick abandon. It's very easy to understand and have fun, and there's just enough variety in attacks, combos and specials to keep you juggling a handful of tactics when all-out brutality requires a little finesse. There are a few blips and niggles that tarnish the package but nothing to really make you rise up in anger; one character in particular seems to have it easier than most due to automatic grappling. You will accidentally throw a weapon when you meant to pick up food. And a boss armed with an Uzi, grenades and a rocket launcher seems a little unfair, but none of this is ever insurmountable. 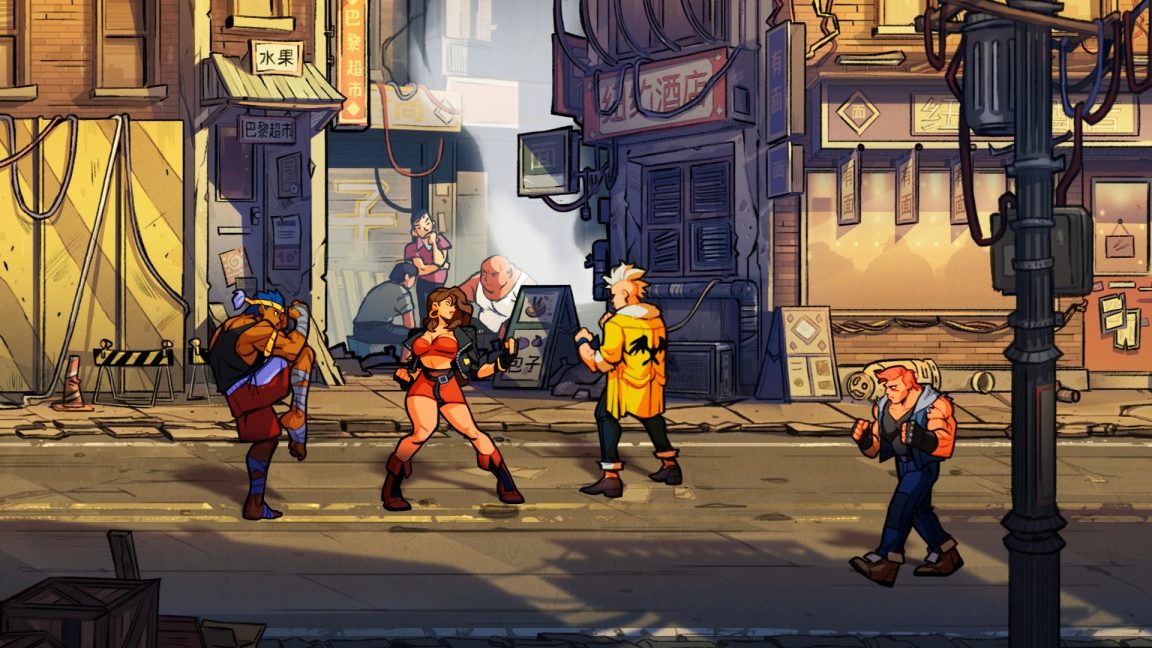 Streets of Rage 4 is a funky anachronism in 2020. It shouldn't exist and it really shouldn't be this good. But who doesn't want to squat over a chicken and hear a floppy bloop, before flinging a sword at a cop, kneeing a biker in the chuff and falling out of a lift. It's a hoot.

Lizardcube, Guard Crush and Dotemu have done such meticulous work it almost feels like the beat 'em up is relevant again. As if the genre never died. It's a triumph that feels arcade perfect in an era where all the arcades have long since been bulldozed.