I just witnessed something absurdly violent and strangely comical in The Outer Worlds. In a weird way, it reminds me of The Wizard of Oz. An X-rated version. It seems the game wants me to say, ‘I've a feeling we're not in Kansas anymore’?

I’ll only do it if I get a small, yappy dog that follows me around. Can I order a tin man and a scarecrow, too? Even better: the two companions I get during my hands-on time with The Outer Worlds are big game hunter Nyoka and runaway mechanic Parvati. They follow me wherever I go and occasionally discuss the difficulties of living in exoplanet colonies owned by megacorporations. At one point we discover that Parvati doesn’t even know what a weekend is.

I feel sorry for her but quickly get distracted by Nyoka’s gigantic minigun. Who needs a brain, a heart, or courage when you’ve got a death cannon? During shootouts, I can press a button to have either of my companions unleash a devastating attack on the enemy I’m targeting. I activate Nyoka’s move and watch as she fiddles with her person-sized weapon in a cinematic camera angle. Then she takes a wide stance and screams as she blasts red hot streams of lasers at her victim. The head and limbs explode so that only a scorched torso hits the ground.

Needless to say, I feel pretty untouchable as marauders hug their guns behind cover, or run directly at me while wildly swinging a sword. The scaly raptidons have a better go at it with their thick bellies and aggressive lunges. Some of them can spit acid from a distance which pools at my feet and nibbles at my health. Parvati likes to piss around in it and scream her pain into my ear. “Aggghhh, oh it burns,” she cries. Yeah, no shit. I quickly drown her out with the PTOCK PTOCK of my dead-eye assault rifle as I deal with the overgrown crocodile charging at us, then employ Tactical Time Dilation (TTD) to finish the job in stylish bullet-time goodness.

TTD is The Outer World’s version of the V.A.T.S. system in the Fallout games. But it’s better. Consider that V.A.T.S. sits somewhere between real-time shooting and turn-based combat. Time almost pauses so you can cycle through body parts and choose which one to damage. TTD doesn’t slow down time quite as much and lets you aim your gun freely but more precisely. Point your reticle at a head for an execution, or go for an eye and you can shoot to blind, while limbs can be crippled and other body parts maimed.

My initial impression is that TTD feels like a proper complement to the first-person shooting. You can still move around a little and even activate it in the air if you want to try a fly-by execution. At one point I pop into slow-mo, pull off a quick headshot, then immediately pop back out. Compare that to V.A.T.S., which sticks you to the spot and disconnects you from the flow of the action completely. That difference is why TTD shouldn’t get rote as quickly as V.A.T.S. does. I don’t need to watch a ghoul die in slow-mo for the hundredth time, thanks. 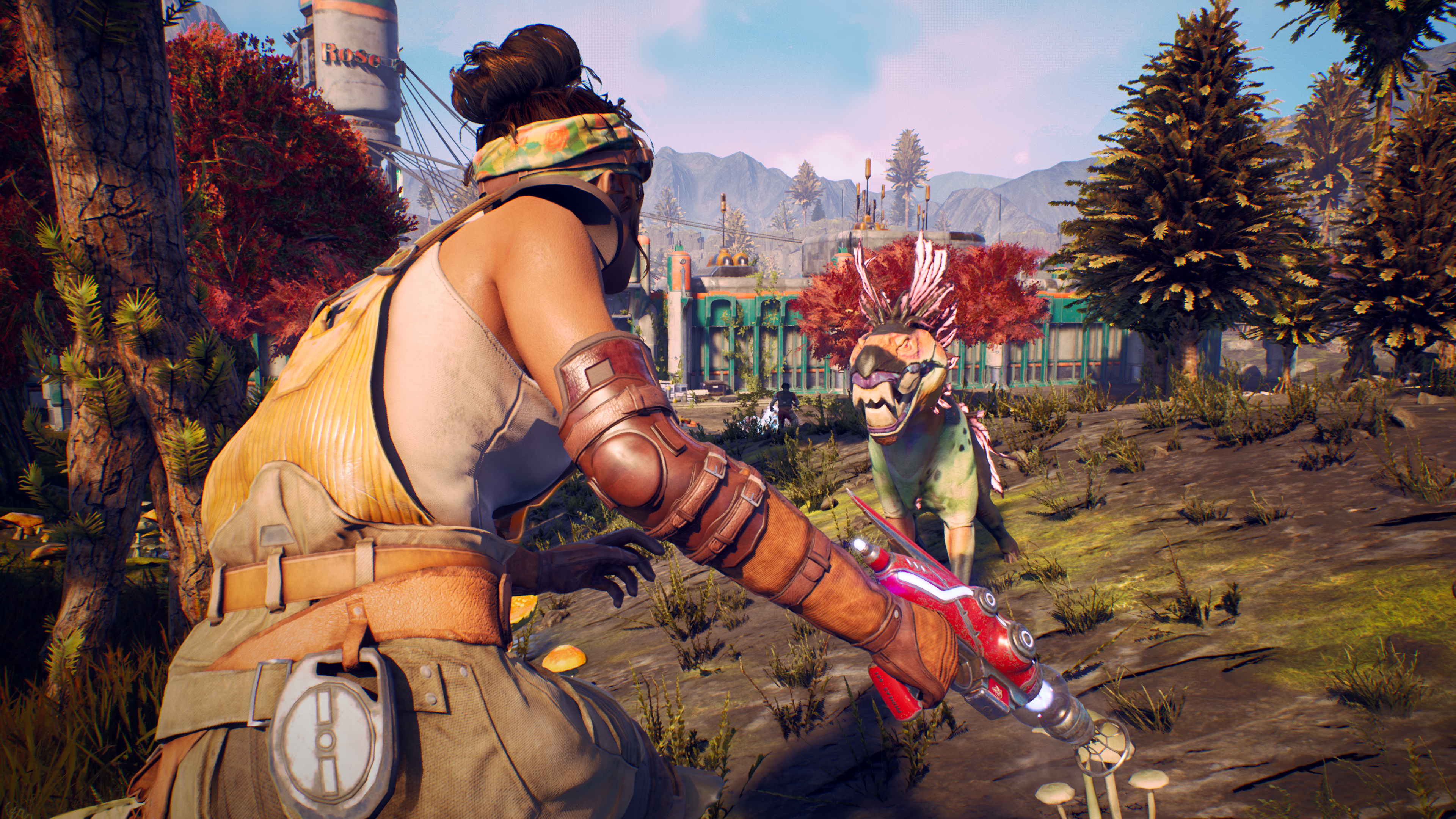 With the path cleared of lizards, my destination opens up in front of me. STELLAR BAY is written in neon in front of a steely settlement. It looks more like a factory that has risen out of a swamp than a city of the future, but here we are. What strikes me most when I get inside is that it feels a lot like a Fallout city. There aren’t any moving crowds, people sit or stand in place, and while it’s grimy there’s nothing visibly flying around in the wind. Where’s all the debris and trash? I think it’s the stillness that reminds me most of Fallout. Kinda like I’m the star of The Truman Show and everyone’s waiting for me to speak to them. Eerie.

That soon changes when I spark a conversation with practically anyone who has a name above their head, and not just the word ‘Resident’. Agnes Needham calls for my attention and then despairs about her son Tucker running away to join the Iconoclasts - a separatist group who aren’t under corporate control, led by a man called Graham. She cries about her “little boy” and how he doesn’t understand the dangers behind the city walls. Has he been mauled by a raptidon or eaten by a ferocious mantiqueen? No, he’s a 42-year-old man with an overprotective mother. Leave him be, Agnes.

After I find him, I help Tucker out by telling Agnes he’s dead. She doesn’t believe me until I show her the ring he always wears. It was his daddy’s. Think it harsh? I could have just shot the git in the head and be done with the whole quest if I wanted. If my skills in persuasion were better, I could have told him to face his mother himself. Or, if my character were more intimidating, I’d have the option to threaten him with beating up his mother just so I could get a reward. See? My way isn’t so bad after all.

The wealth of options in the dialogue - as long as you have levelled up your skills enough - means you can avoid a lot of the combat in the game, especially if you choose to sneak past patrols and wild animals. You can even open up new dialogue options by playing as a character of little intelligence: people will recognise how brainless you are and realise that they can manipulate you. This isn’t always to your disadvantage. Choose this kind of playthrough and you should find much of the absurd wordplay and sillier humour that The Outer Worlds has to unravel in front of you, like a clown pulling endless scarves out of their ass. 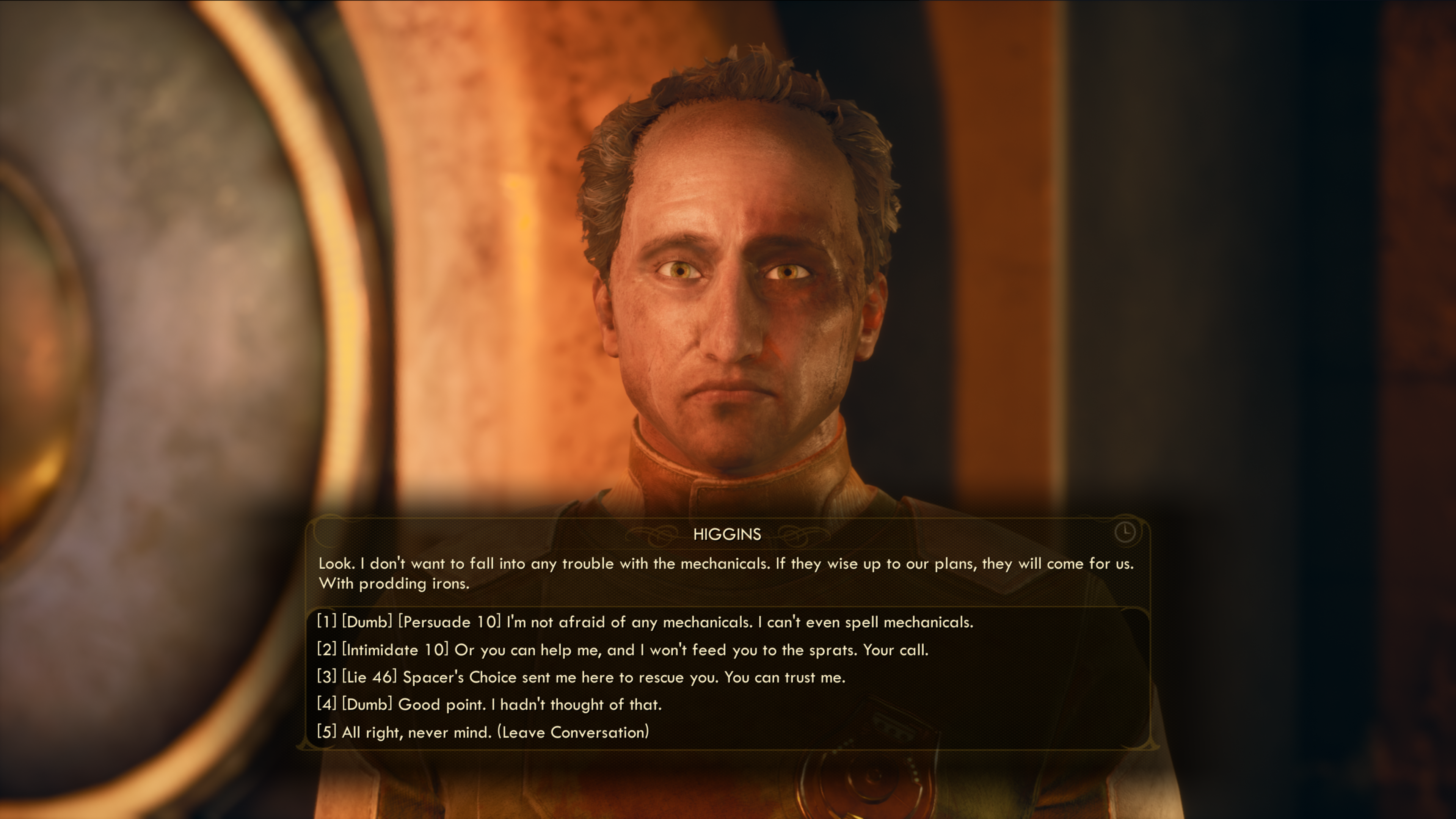 The ‘Dumb’ dialogue is something that’s been missing from the Fallout games since the second one. It appears here as a couple of the series’ original creators, Tim Cain and Leonard Boyarsky, are the leads on The Outer Worlds. Their team of writers inject the game with comedy that darkly riffs on serious topics like production quotas, exploitative labour laws, and rapid industrialisation. And it’s not just jokes for their own sake - they’re embedded into the location and characters. These jokes have setups and take into consideration the surrounding context. It’s a masterful blend of sci-fi spoof, visual gags, and workplace satire that cuts close to the brilliance of Futurama.

I quickly learn that every quest is worth pursuing. It could be to solve conundrums like choosing to side with deserters or the larger corporate community they ran away from. Or for a daft joke about the flashy titles that business people give their projects - like THUNDERDAWG and DANGERBURN. Other times the game goes full-on tragic, like when I meet Winslow, who tells me he’s been awarded a 5% discount on Zero Gee Brew after injuring himself at work. Now he gets drunk so that the only pain he feels is emotional. Sing it with me, everyone! Somewheeeeeere over the rainbow, way up hiiiiiiigh...

Among my favourite moments comes when chatting to Celia Robbins, a gifted corporate assistant, who’s trying to woo a man called Sebastian. He sells fresh animal parts for a living so her method of getting closer to him is to buy toenails, flesh, and wings from him. She stores them in her apartment but it’s starting to stink and her neighbours are complaining. Now that’s 100% nasty, but haven’t we all been there, doing rotten things in the name of romance? Alright, maybe not quite that rotten.

This girl needs help, and it’s not like I can romance Sebastian myself (or anyone else in this game). The closest I can get is setting other people up on dates, so that’s exactly what I’m gonna do. I approach the soft-looking biker boy and strike up a conversation. Parvati helps out by making Celia’s feelings towards Sebastian perfectly clear to him: “She’s smitten with you. You smited her. Smote? Smoot?” Y’know, all Parvati does is help me out. Isn’t she just so helpful? I wish she would stop. At least the date has been set up. I don’t think he deserves Celia as he doesn’t seem that bothered about the whole ordeal. At least he’s cute. 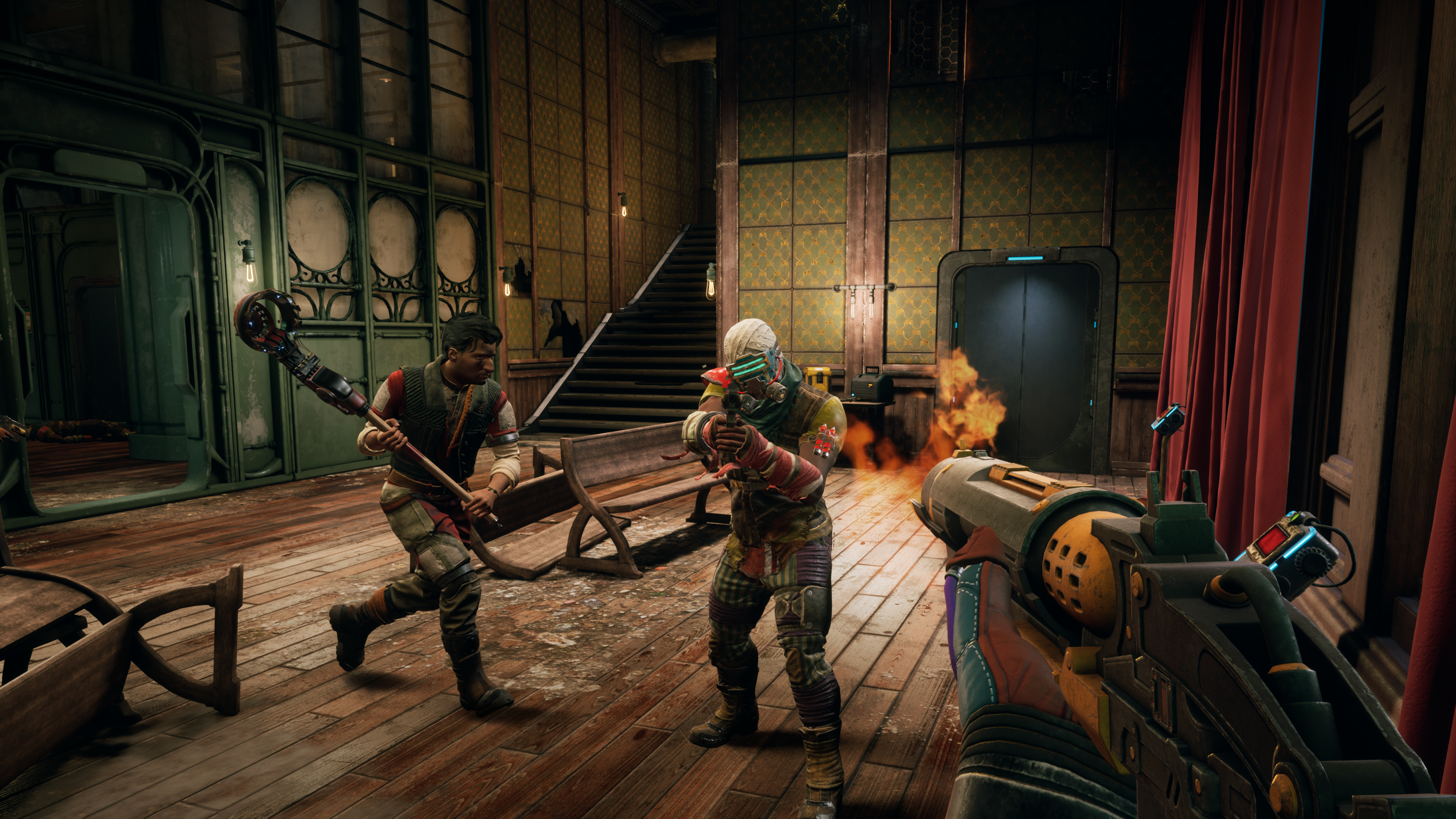 Wait, that doesn’t sound so bad (well, apart from the bit about his loins)? Yeah, you’d be right, but in The Outer Worlds, being helpful and considerate to those beneath you in the corporate structure is despicable. It’s halted Sanjar’s career and forced the totalitarian governing body The Board to oust his corporation from its financial and legal protection. He gave them everything he could to stop it, including his left kidney, but it was no good.

I decide to help Sanjar out by fetching a weapon called BOLT-52 which I assume is a nasty gun. Turns out it’s a data cartridge that he gets very excited about. “I’m going to be up all night with this,” he says. “All those blanks waiting to be filled, boxes waiting to be ticked…” Apparently, the only way to get anything done here is through bureaucratic micromanagement. The state that my gun has left the raptidons in just outside of the city says otherwise.

But thinking about it, I do enjoy watching the numbers tick by and choosing perks when I level up. And that definitely benefits my damage output. So perhaps micromanagement is the best way to progress after all. But is that because I’ve grown up under hypercapitalism? I’ve been thoroughly trained to adore seeing numbers ascend as a direct result of my labour. Oh god, I’m one of them. Alright, enough of this, let’s just say that The Outer Worlds is Fallout’s funnier cousin. It’s intelligent, hilarious, and I think I fell in love with the clicky reload animation of the dead-eye rifle. Now how does it go? I click my heels together and say ‘There’s no place like home’. Got it.

The Outer Worlds is coming to PS4, Xbox One, and PC on October 25. It's also coming to Nintendo Switch, but there's no release date yet. Get yourself a plate of boarst while you wait (don't read that if you're eating).