Metro: Last Light is a dark, provocative shooter that neither coddles or insults your intelligence. VG247's Dave Cook plays the final code and explains why it's a breath of fresh air.

Developed by Ukraine studio 4A Game, Metro: Last Light is the sequel to Metro 2033

While Metro 2033 was based on the book by Russian author Dmitry Glukhovsky, Metro: Last Light is a brand new story set in the same world.

The game's script and dialogue were penned by Glukhovsky, and will make up part of his next book Metro 2035.

You can read my interview with Glukhovsky - in which we discuss how he wrote the story and more - right here.

Narrative in shooters can be hit or miss. On one hand you could try to crowbar sentiment and empathy into a game like Call of Duty, only to obliterate the impact by following it up with yet another bombastic duck-shoot sequence.

Does the hail of gunfire that threads these scenes together water down the plot, or do these tales get in the way of the action? Should these games simply shut up and get back to the wanton slaughter of faceless foes, or is there room for deep stories in the genre?

I'm guessing that the answer would be different for everyone but personally I've experienced - actually, 'endured' is probably a better word - countless scenes that are supposed to be touching, only to have them crippled under the weight and din of the ludicrous battles that followed.

It worked in Half-Life because of the game's ambiguity. Most of the story is left up to your imagination, and that is a neat way to tackle these particular problems.

The world is largely what you make it, just like Gordon Freeman is - in essence - a blank canvas for the player to paint his or her characteristics onto.

I'm quite far through Metro: Last Light now but due to many factors I've yet to finish it. So this isn't a review by any means, but I really wanted to touch on the way the game treats you with real respect in terms of both plot and gameplay. 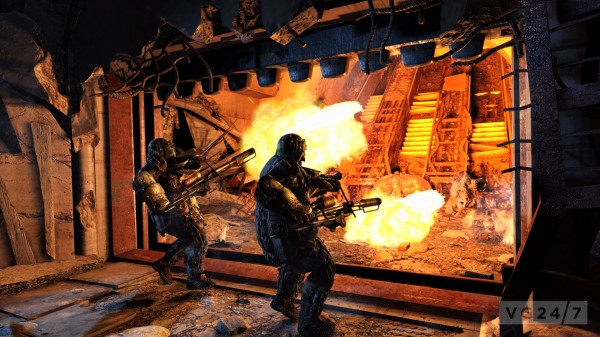 It's a remarkable thing that delivers real narrative heft, hammering you constantly with its bleak tone, scenes of extreme violence and lack of hand-holding. It's about time we had another FPS that doesn't shepherd you every step of the way, or corrodes its own integrity with dialogue that wouldn't feel out of place in a Jason Statham film.

So we all know that Metro: Last Light is a game about the apocalypse. World War III has turned the planet into an ashen wasteland where radiation has rendered its surface uninhabitable. In Moscow, the populace has taken up residency in the city's sprawling Metro underground network.

Protagonist Artyom is on a path of redemption, trying to make amends for a terrible deed carried out in the first game - I won't spoil anything for those who haven't played it. So off he trots, wading right through the middle of a bubbling civil war between the Metro's various factions and getting his hands very bloody in the process.

But for all of its harrowing scenes and sense of constant despair, it's an optimistic game. Life before World War III is scarcely mentioned. Instead, NPCs talk about soldiering onwards, about salvaging what they've been left with, about rebirth. You see families with young children enduring their lot in life, and it's clear that this is - in actuality - an optimistic story.

It's still as depressing as hell though, but it's very smart too. The dialogue is clever, there are personal stories to be found everywhere - be it a mother consoling her child after he loses his teddy bear, or people citing Russian poets. These stories are tangible and they are told in a believable tone. As a literary work, - to me - Metro 2033 author Dimitry Glukhovsky has penned a compelling piece in Last Light. Writing is subjective after all. 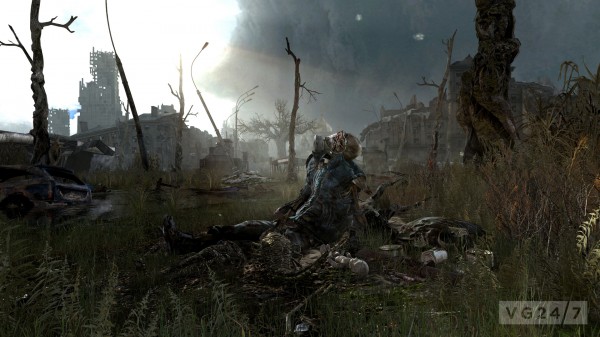 There are no 'OORAHS' or 'broseph-speak'. Just people with stories; avatars emulating life. You can still kick back and play the game without giving the plot much thought, but you'd be fool to do that as the Metro network is a place you really can invest yourself in if you spend time hearing people out. The end result is that you'll have a greater appreciation for Artyom's station in the world as you progress.

It's a tough place to live, clearly, and this actually translates to the game's central mechanics too. There's a notable lack of typical HUD elements. There's no health bar, no constant ammo counter, no mini-map and best of all, none of those intrusive objective markers, I'm glad that the latter is absent as it's really becoming an excuse for lazy signposting lately.

Artyom's flashlight will run out of juice over time, and it doesn't simply recharge on its own. Instead you have to find a safe spot and whip out his battery device and pump it up manually. If you want to see where you need to go next you have to equip Artyom's compass, leaving him open to attack unless you're careful.

It's a hard game too, with hidden treasures - both in the form of loot and NPCs tucked away - down roads less-travelled, and it never once treats you like an idiot. I recently wrote a blog about a hidden area I found off the Metro line, in which a young woman is almost raped.

If you save her in time you don't get an achievement, and there is no loot reward. She just curls up in a ball and cries. I found it strange at the time. But that's how it would happen in real life, and while it may seem like a small scene, it challenged my pre-conceived notion of game design and reward mechanics. 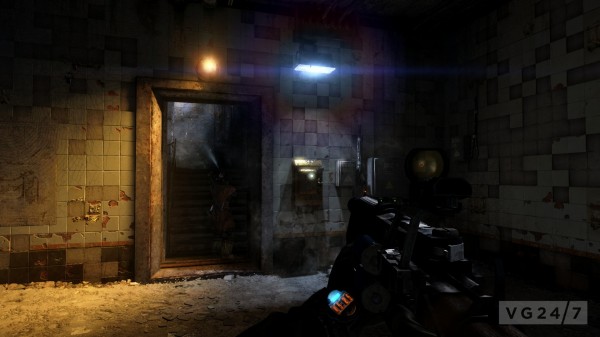 This is a bold game that will absolutely challenge your perception at many junctures. It can surprise, shock, upset and scare you all in one chapter, but most important of all it will entertain you. Thoroughly.

So if you're sick to the back teeth of the way some genres and franchises seem to deliver more explosions and chest-beating bravado, than brain cells and provocation, then I implore you to play Metro: Last Light. It may be murky and at times downright sad, but it's given me hope that shooters aren't turning into mindless run-and-gun exercises.

Alongside BioShock: Infinite, this - to me personally - deserves a place as one of the best-written shooters of the generation. The streamlined core gameplay is, sadly, cause for another debate entirely. But then again I'm yet to finish the game, so maybe this is something worth returning to once I've beaten it?

Let us know what you think if you check it out when it releases on PC, PS3 and Xbox 360 across North America from May 14, and across Europe from May 17.

Disclosure: To assist in writing this piece, Deep Silver sent Dave a copy of Metro: Last Light on Xbox 360. No merchandise or advertising was offered or accepted.