Max Max is heading to current and next-gen formats. Catherine Cai checks out Avalanche Studios' open world wasteland and speaks with the studio about its ambitious scope.

The game will accompany Warner Bros's movie reboot of the post-apocalyptic classic that starred Mel Gibson.

It's an open world game rammed full of gunplay, stunts and car combat, similar to Avalanche's island-hopping adventure Just Cause 2.

If you missed the Mad Max reveal trailer at Sony's E3 event, you can watch it again here.

Usually, when I hear that a game's a "movie videogame," I'm on high alert, ready to run away screaming.

The Chronicles of Riddick and Transformer games - among a very selective few - being the rare exception, I'm hard pressed to name any videogame based off of a movie that isn't complete and utter drivel.

When Warner Bros. revealed that it would be developing a Mad Max videogame to accompany the Mad Max movie reboot at the Sony press conference, I immediately started to tune out.

Even though the original Mad Max film was one of the few things that jump-started the entertainment industry's fascination with the wasteland, the saturation of the wasteland/post-apocalyptic aesthetic in media, and videogames especially, has made me rather apathetic to the entire genre.

Oh, another game about what the end of the world is going to be like? Joy. Join the club… or don't. It's getting a little crowded in here.

It wasn't until I saw that Avalanche Studios was attached to the project that I became interested again. Just Cause 2 was an absolute blast to play, mostly because it harbored no pretensions about what kind of game it was.

Sure, there was the semblance of a storyline, but what really mattered was the sheer amount of destruction you could wreak on Panau, all the while traversing around using a combination of the grappling hook and the parachute.

I had a chance to watch Mad Max creative director Frank Rooke and senior game designer Emil Kraftling demonstrate the game. It feels like Avalanche took the same blasé approach for the development of Mad Max, and it's a good thing.

Mad Max plays out like a standard open world game. As Max, you traverse the hostile wasteland - in a car, of course - collecting and scavenging for goods wherever he can in order to survive. These goods can be used to upgrade himself, or his car.

Like most open world maps, the one in the game shows the player activities, landmarks, and general things of interest and of course, as expected of the game's genre, it's respectably expansive and worth developers bragging about it.

Combat, while controlling Max, is also fairly standard. Max has a variety of means to take down his enemies, be it with his fists, a knife, or his trusty shotgun. There's also a sniper rifle that's stashed away in his car to be broken out for emergencies, or whenever the player feels like driving a virtual bullet of a terrifyingly high caliber through some pixels.

For the most part, Mad Max features things that we've all seen before, and I think Avalanche is well aware of that. A large portion of the demo was spent showing Max blowing various things up, something that the developers got quite the kick out of.

In fact, Rooke even declared "stealth is not really a factor in the game" and that they didn't really "encourage it." Essentially, going in guns blazing is the way to play, and I'm glad that it's something they're rather upfront about. 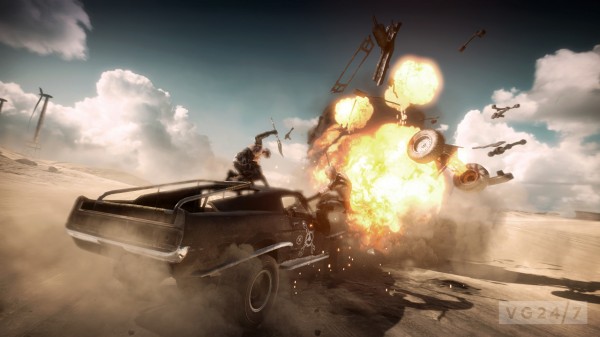 However, what did stand out to me about the game are the vehicles. Well, of course, that's rather obvious. This game does bear the Mad Max name. Interceptor is no more, and Max is left with a car that's a lot less pretty. In any case, his vehicle is almost a character in this game, and the player must take care to upgrade the car.

Of course, anything that a player does to Max's car will change up the way it performs and handles, allowing the car to be unique in customization to the player. "It's important to note though that handling and performance are very subjective to a player and that's the way we like it," said Rooke, "so maxing out on every upgrade is not necessarily the best way to get the best car. But you sort of tune the customization options to build your own personal preferred vehicle."

This makes car combat rather interesting. One of the features that Avalanche touted was the car physics. The car serves as a weapon in the game and upgrades help hone it to make it a much more effective destruction machine. The developers demonstrated this aspect of the game with some car-on-car combat.

Besides the usual car-ramming that's so often seen in games, the player has a variety of options available to them to fight off enemy cars. Max can duck out of his car briefly to use his shotgun to fire at enemy cars, or shoot down enemies that have leapt off their own vehicle onto his. There's also a harpoon that players can take advantage of to pull off bits and pieces off an enemy's car … or, for an easy few kills, the enemy car's driver. 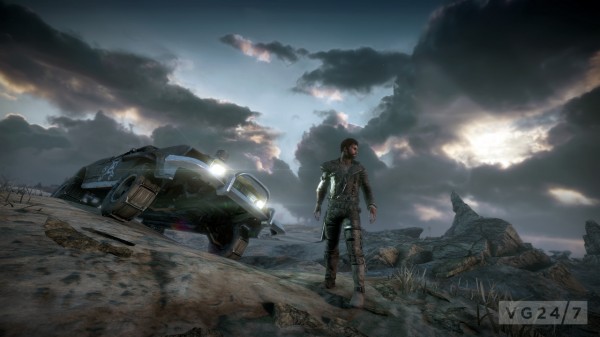 The amount of detail put into the physics is evident even through the simple act of driving. When driving over rough terrain, the suspension will bounce realistically depending on the weight of the car.

Cars are also a useful tool to destroy certain parts of the environment. At one point in the demo, Max comes across a gate that's impossible to tear down given the current condition of his car. In order to bring it down, the car must pack a heavy-duty demolition grill.

Once Max has the proper amount of supplies for an upgrade, his companion slash mechanic sidekick, Chumbucket - who rides along in the back of the car - will fit the car with the new upgrade.

Adding the demolition grill to the car is where things get a little more interesting. The grill changes the weight of the car, which impacts the performance. In order to compensate for the extra pounds and the car to revert to how it handles pre-makeover, its engine and tires must also be altered.

Like Just Cause 2, Avalanche isn't looking to deliver a hugely sophisticated experience with Mad Max. Instead, it's more about giving the player the satisfaction of simply being able to blow things up and have fun doing so, all while staying true to the Mad Max franchise.