After a month of grinding and 252 deaths, one man has successfully finished Halo 3 using only a Guitar Hero controller and pure willpower.

Youtube user Super Louis 64 did the seemingly impossible by beating Halo 3 on Legendary using, of all things, the plastic Guitar Hero controller.

Super Louis 64 shows off highlights from the fruits of this maddening labour in a 22 minute video, which features the frustrating and ridiculous deaths that had to happen before he could reach this truly impressive yet pointless goal.

Using an input converter to change the guitar controller to match that of an Xbox 360 controller, he is able to move left using the guitar's green button, right with the red button, jump with the yellow button, and shoot with the blue button. But a whole other set of actions can be triggered if you hold the orange button simultaneously. Strumming the guitar lets you move forward or backward, and when holding the orange button this doubles as your method of aiming up or down.

"The hard part of the run was managing a FPS with a guitar that has no joysticks," he writes on Reddit, explaining that the control scheme makes it almost impossible to aim and shoot at the same time. Obviously, that's a bit of a problem in an FPS.

"Overall it was a challenging run as I haven't played Halo 3 in almost a decade. I saw a tweet earlier this year about someone joking about their roomate blazing on adderall and beating Halo 3 legendary on a guitar. I wanted to see if it was possible and it turns out it definitely is if you don't mind your hands falling apart."

Here is the completely ridiculous control scheme in full, developed by Super Louis 64: 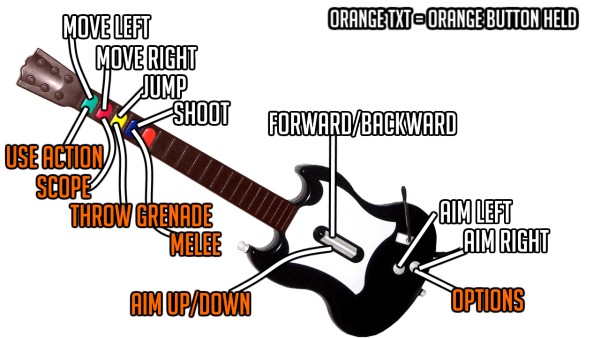