Grand Theft Auto 5 reviews are dropping now, and VG247's Dave Cook has been playing it over the weekend. Does it make up for GTA 4's lack of punch, or does it miss the mark?

Back in May I wrote a blog explaining why I've only finished one GTA game. In short, the scale was daunting, menial tasks made the experience a chore, and the creeping RPG elements demanded more time and effort than my already hellishly busy life would allow. It's always been clear to me that the series exudes quality, but we just didn't get along.

I've now sunk over nine hours into GTA 5 and I'll start by saying explicitly that Rockstar North as successfully remedied every issue I've had with previous installments, and then built on that raised bar even further. It's a triumph in design, much like the leap between the first two Assassin's Creed games, but on a grander scale. I no longer feel suffocated by the enormity of the tasks at hand, especially with missions as fun and insane as those drip-fed here.

Not enough? How about dressing up as a geeky intern to infiltrate Facebook parody Lifeinvader's stupidly kitsch offices? The plan is to sabotage the company's latest smartphone ahead of its big Apple-style conference, attended by rows of crazed consumers flapping their arms like sexually aroused seals. A simple remote detonation sees the newly-unveiled device blowing up, taking the CEO's head with it. Like this example, many of GTA 5's filler missions introduce new mechanics and ludicrous set-pieces that resign the dull fetch quests of old to distant memory.

But then there's the heists, which see the player assemble crews, acquire tools and execute cleverly-planned jobs throughout the plot. It all starts with the increasingly disturbed Michael suffering an explosive mid-life crisis after years as a retired bank robber. His kids hate him, his wife's screwing her tennis coach and his shrink is more concerned with making money than actually guiding him towards a breakthrough. He's a mess, and everything he touches - sometimes literally - explodes.

After getting in deep with a Russian mobster, Michael teams up with Franklin and later on, his old partner in crime, the deliciously psychopathic Trevor. Each job sees the player presented with multiple options as to how they want to tackle the heist at hand. The initial jewellery store plan sees the player recruiting team members. The more skilled they are, the bigger cut of the spoils they take. I opted for stealth, so had to case the store using Google Glass-style specs, and send photos back to the team's tech-head Lester. 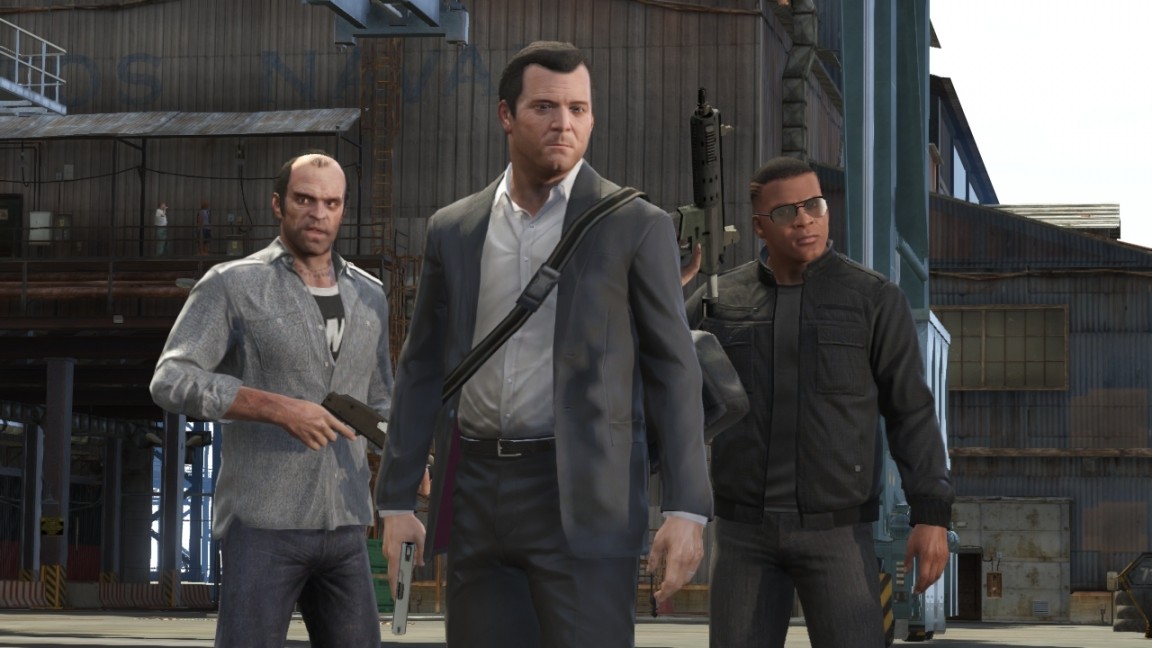 Then, I had to examine the store's vent system, steal an exterminator van, hijack a truck full of sleeping gas and more. Come the big day, I hurled a canister of gas through the rooftop vents as Franklin, waited until the staff, customers and guards fell asleep, then switched to Michael to clear the place out. Franklin and his buddies then escaped on dirt bikes across the city and eventually meet up with Michael and the others in his truck after giving the cops the slip. It was a beautifully planned, expertly paced thrill ride from start to finish. Kudos to Rockstar.

As you may have heard by now, each character has their own story and campaign that intertwines with the over-arching plot, and this lends them increased depth and a more personal tale. Franklin for example, wants to leave the gang life behind and make some serious money through legitimate means, pouring scorn on his former posse for being 'stuck in the life'. Trevor - on the other hand - is a meth and arms dealer with zero morals. He's an unpredictable, kerb-stomping time-bomb.

Flicking between each character is as simple as holding down on the d-pad and flicking the right stick to the person you want to control. The map zooms out, shifts and then focuses in on that person. It takes a matter of moments and underlines the impressive tech fueling the experience. At first the prospect of not one, but three storylines had me concerned, but I'm yet to feel smothered by missions because they're so damn fun. They also have decent checkpoints, which means you no longer have to drive across the map to restart them if you fail.

It's about quality, not quantity, and those stranger missions are back, but this time they're actually fun, unlike GTA 4's simple time-fillers. Franklin's escapades with excitable paparazzo Beverly - in which the duo seek to expose the seedy underbelly of the Los Santos celebrity circuit - are particular entertaining. Then there's the mission that sees Michael toking on a joint, tripping balls and shooting alien hordes with a mini-gun. It's frequently hilarious and delivers comedic writing in spades.

Beneath all of the drama, laughs and shocking scenes lies a master-work of design and coding. Make no mistake, this is true cusp of the generation stuff, with visuals that - without any hint of hyperbole - actually seem to bled into what we now consider 'next-gen'. It's a phenomenal technical achievement in terms of both visuals and delivery. It feels brilliant in your hands now, which is a major plus for me as I felt Niko handled sluggishly and clumsily in GTA 4. Shooting is slick, cars glide brilliantly on the roads and on-foot controls are perfectly fine. 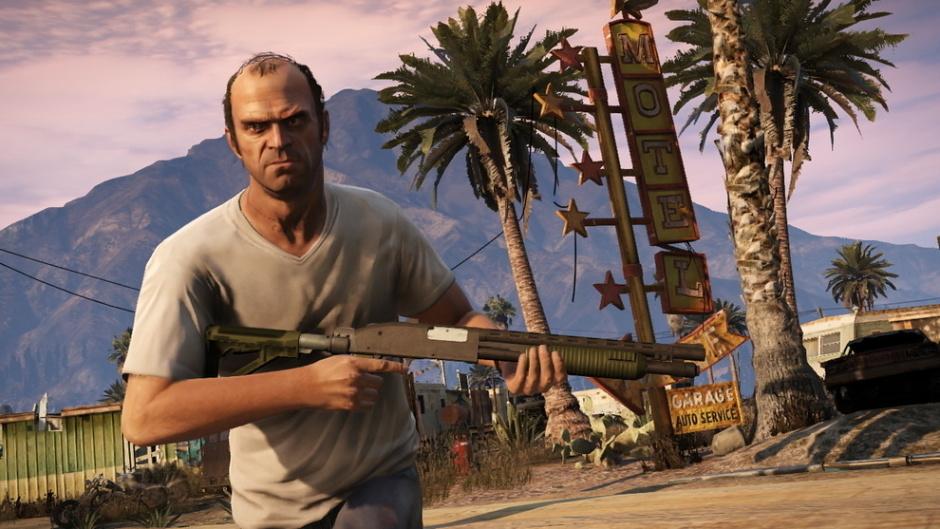 There's more; so much more. The RPG elements return from San Andreas, except this time you needn't worry about keeping your stamina up continuously. There's an 'improve by doing' progression system at play here that sees Michael, Franklin and Trevor's stats increase as they perform tasks. Sprint around the block and your stamina will increase, or if you like, play some tennis. Shooting can be enhanced by frequenting a target range, or just by pulling off headshots in battle.

You're never forced to go play golf or anything like that to keep your character healthy and skilled. That was my big fear going into this thing. Instead, I've just been levelling the trio by performing well in missions. It you want to partake in the bonus attractions then that's entirely up to you. Speaking of which, Chop the dog is a treat. You can walk around the block with him as Franklin, toss a ball around to get him healthy or download Rockstar's iFruit app and improve his skills and behaviour that way. Just don't throw the ball into traffic like I did. He will go after it.

On top of this you can buy properties to expand your empire and increase your daily income, trick out your car at the auto-shop, customise your weapons with various attachments, go to the movies, run a triathlon and more. There's no pressure to do any of it, and speaking of 'pressure', your smartphone is no longer a sustaining source of annoyance in GTA 5. It's there to use in missions and while you get texts, you're under no obligation to reply. There's no friend or loyalty system to speak of.

Saying too much more would spoil the experience for you, but put it this way: I've only finished one GTA game - the third one - because the other games bored me before the end credits rolled. It's not because they were bad games at all, but I guess it was because I wanted a greater variety of tasks at hand. I was always like, 'Cool, I've unlocked that last region! Lots of new stuff to do!', but then no, it was the same fetch quests, clumsy shoot-outs and other things I couldn't be arsed with. In GTA 5, you can replay missions to improve your score, and for the first time since Three-Leaf Clover, I feel compelled to relive them.

Not a single moment of GTA 5 has felt like a slog so far. I'm too busy sitting there ogling the beauty of it to notice, and when I do have to focus on gameplay, it positively sings. I'll likely write another blog about GTA 5 once I've finished it, and when GTA Online goes live October 1, but for now just know that Rockstar North - as monolithic and unwilling to divulge secrets as it is - has listened to your complaints and has remedied them all with style, grace and technical mastery.

Disclosure: To assist in writing this piece, Rockstar Games sent Dave a copy of GTA 5 on Xbox 360.