GeForce Experience
The GeForce Experience, as Nvidia calls it, is a suite of tools which allows users to achieve the best possible performance settings without having to fiddle with them on their tod.

CEO Jen-Hsun Huang said Nvidia has a team of expert gamers which play every game, and determine which settings are best for performance and visual fidelity. When a gamer uses the GeForce Experience, it automatically takes both these optimal settings and the user's hardware capabilities into account, and adjusts the game's settings accordingly.

This is supposed to introduce an element of stability to PC gaming, so that, console-like, players get the best possible results without having to make adjustments which can seem esoteric and confusing to new PC gamers. The suite will come free with GeForce hardware and is designed to lower the entry barrier to PC gaming.

The new offering will support SmartTVs and low-end devices like laptops, allowing them access to Nvidia's tech farms, which it calls the Grid, to play and access save files.

Huang said the Grid will deliver on the promise of cloud gaming, because it supports up to 24 users on each server - more than many existing server architectures do, making cloud gaming more practical.

Nvidia won't offer a streaming games service like OnLive or Gaikai; it intends to license the tech to partners. Each licensed Grid System includes 20 Grid Servers, with 10 GPUs each. It provides 200 teraflops of processing power, which is equivalent to 700 Xbox 360 consoles. 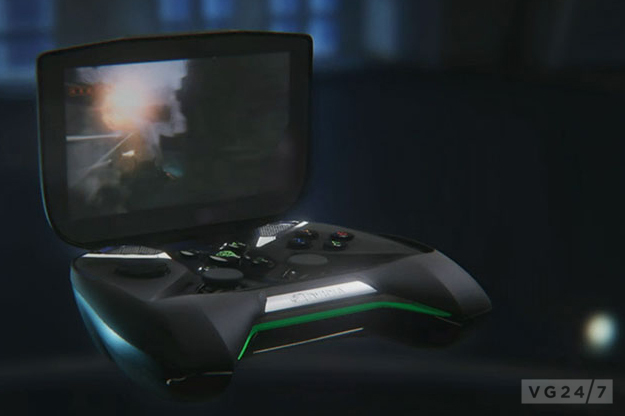 Tegra 4 and Project Shield
While it was at it, Nvidia also used the CES to unveil its latest high-power mobile processor. The Tegra 4 has 72 GU cores,making it about six times as powerful as the Tegra 3. A new image processing engine means it can complete oeprations at ten times the speed of current devices.

The new processor retains the quad core set up of the Tegra 3, but it has Cortex A15 cores and is compatible with LTE networks.

As usual, Nvidia claimed the new tech is the fastest mobile processor ever.

Of particular interest was a video of something called Project Shield, a Tegra 4 powered gaming device. The portable console looked like a typical twin-stick control pad attached to a 5" screen, and runs Android.

A micro SD slot allows for cellular connection, and HDMI allows you to hook up to a larger display should you wish. The on-board sound is supposed to be pretty special, and the built-in battery provides up to 38 hours of juice, Nvidia boasted.