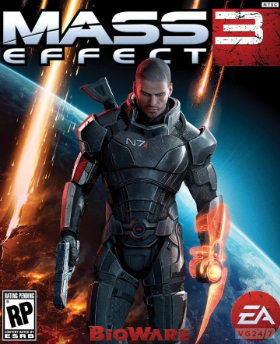 The hugely-anticipated final chapter in the sci-fi space opera from BioWare.

Story sees Shepard face the Reapers in a do-or-die battle for Earth.

Series originally a 360 and PC exclusive before making to jump to PS3 with ME2 in January 2011.

More Mass Effect planned for the future, but without Shepard.

Personally speaking, at the beginning, I had an on/off relationship with Mass Effect. At the start, I got on with it fine, but at some point - I can't remember when specifically - I came undone with the game and ended up trading it in. But a couple of months later, I rebought it and haven't looked back since.

I managed to finish Mass Effect the weekend before ME2 came out, with the main story for that finished a couple of days afterwards. I still haven't touched any of the story DLC so far, though. I really should, mind. Nonetheless, Mass Effect 2 was game of the year for me last year. Now we're approaching the end of the trilogy at long last with Mass Effect 3, announced at the Spike VGAs last year.

Here at Eurogamer Expo 2011, I got to play a bit of the E3 demo that is on show for Xbox 360, albeit the same one Nathan played at PAX. We're about what appears to be midway through the demo. We're playing as ManShep (FEMSHEP4EVER) who has to help escort Mordin and a female Krogan, who's key in Shepard's fight to save the Earth against the Reapers.

As my team, consisting of Garrus and Liara (Wrex is also circling in a ship to help pick us up), try to help get the pair out of here through multiple checkpoints, we also have to put up a fight against Cerberus, the human organisation that helped Shepard get back on his/her feet in ME2, who are now one of the main threats to you after just merely deciding to turn on you.

From what I experienced from the demo I played, combat feels tightened from ME2.There's also the introduction of a new melee weapon in the form of the Omniblade, useable by holding the B button when near an enemy. Midway through the level, we also came across a hub which allows you to switch three weapons on the fly, but I had decided not to in my playthrough. Why not? I was doing well with what I had.

Near the end of the demo, just as we had cleared the krogan and Mordin, a big - and I do mean big - walking tank from Cerberus that intends to stop you from leaving. And no, Wrex doesn't hastily come in and save you: he's not going near that thing in a million Sundays while it's still standing. So it's on you to take it down. After a few popshots at its shield, it's all smooth running from here. We end the demo with Wrex's small ship flying off world without any voiceover. For what it's worth, there was Vo with all characters involved in it.

The fact it's the climax to the trilogy will probably heap a fair bit of pressure on BioWare to deliver, but from what I played, there shouldn't be any fears at all. Whisper it quietly, but Mass Effect 3 is currently on course to be just as great as its predecessor. And that alone was a brilliant game.