Star Wars: Knights of the Old Republic 2, Planescape: Torment, Alpha Protocol, Fallout 2, Fallout: New Vegas, Pillars of Eternity, and Divinity: Original Sin 2. You might assume this is simply a list of some of the best, most reactive RPGs ever made, but it’s actually just some of the amazing video games Chris Avellone has written for.

Every game Avellone works on seems to benefit from his pen, every experience offering branching narratives and worlds that react to the player, even outside of scripted dialogue sequences.

So where exactly did that talent come from? The answer is pen-and-paper RPGs.

"Working in video games is a lot like being a virtual gamemaster."

Before games, Avellone headed up RPG sessions with friends, taking on the role of gamesmaster before leading them on a journey. This intimate storytelling method allowed him to gauge the reactions of his players firsthand, seeing the looks on their faces as he pulled the rug out from under them, lifted them up, and surprised them at every turn. 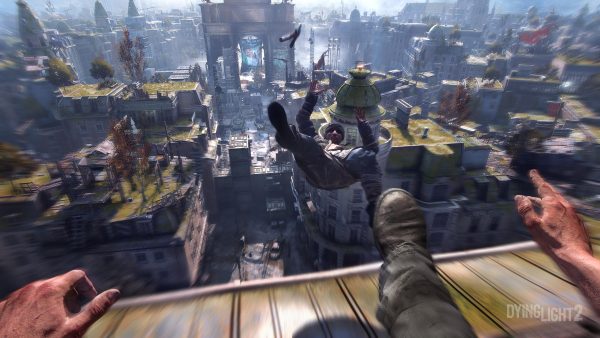 “Over time - and a whole mess of mistakes later - I made attempts to refine my gamemaster skills to adjust to the players,“ Avellone tells me. “This meant, for example, designing adventures where every character’s skillset had the chance to shine so no one person hogged the limelight.”

He would make sure each player had their own secrets, revelations, substories, and even unique items only they could use. He mastered the art of making everyone feel special in a shared experience, while also being able to react to an important random element: the players themselves.

“Working in video games is a lot like being a virtual gamemaster,” he explains, “so many of those techniques for making sure the player is entertained are much the same as being a tabletop gamemaster.”

Most recently, Avellone took to the stage at E3 to announce Dying Light 2, a zombie-slaying sequel from Techland. The first game was an exciting, parkour-fueled adventure through a grizzly, terrifying world. As an action game, there’s not much it needed to do to improve, so Techland decided instead to focus on the writing, turning it into an action RPG that reacts to everything you do. With Avellone on the writing team, along with Karolina Stachyra, a writer who worked on The Witcher 3’s Bloody Baron questline, you should be very excited.

“I’ve done a lot of branching storylines, branching dialogues, and a variety of reactive events and different endings in most of the titles I’ve worked on, so to be able to apply that to an open-world space like Dying Light 2 is a fun challenge,” Avellone says. “Because I’ve had a chance to work on extremely reactive games, I know some of the best techniques to organise the flow of the plot and characters to account for a wide variety of actions.”

One of my strongest memories of the first Dying Light is a sidequest that asked me to save a kid from their zombie dad. I sprint across the rooftops, climb through the window, and cleave their undead dad in two with a claymore sword the size of a tree. He was like a banana split. His kid comes out of the cupboard where he’s been hiding and thanks me for saving him, never once recoiling at the site of his gross, split in half father lying at his feet.

Dying Light 2 plans to fix this. As well as offering branching dialogues, Techland hopes to create a reactive world, bringing it to life outside of conversations, to avoid similar things pulling you out of the experience.

"The big one is learning that you shouldn’t funnel the player – they’re here to explore the space; let them, don’t shackle them."

“We have new AI in the game, and it will react to different situations,” creative director Adrian Ciszewski explains. “For example, AI in Dying Light 2 can ‘sense’ if the place or the situation they find themselves in is dangerous. And if so, they can make a decision to get away from that danger. 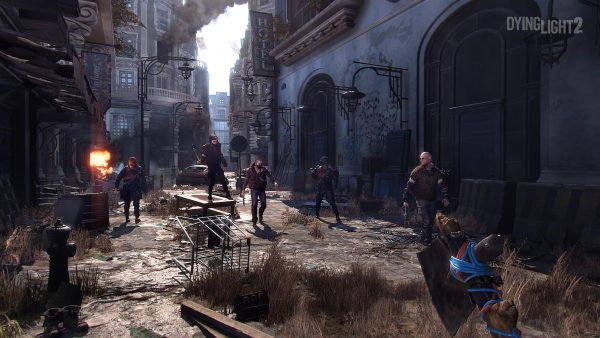 “Having a reactive world is really important for what we want to achieve. Ours is a game where decisions are made through actions, and not just through which option you choose on a dialogue tree. Do you remember the Peacekeeper occupying the water tower in our E3 demo? You could have pushed him off the tower and that would have consequences.”

Some of this was helped along by Avellone, who has learned a thing or two over his years of working on RPGs about the unexpected things players can do to mess with your carefully crafted narrative.

“The big one is learning that you shouldn’t funnel the player – they’re here to explore the space; let them, don’t shackle them,” Avellone says. “It can be a challenge to tell an open-world story if you’re not considering what the player brings to the equation and allowing them to assume an equal role in the events taking place and even better, causing the events that lead to the story progression.

“It’s easy to imagine a story that takes from A to B to C with a set series of events, but in an open-world game, you have to put the player agency and their ability to affect the world at the forefront. So for example, rather than A to B to C, you take a step back, assume the player starts at ‘A’, and then can do all manner of events to cause ‘B’ to come to them through the actions they do in the open-world – or, a number of different ‘B’s, not just one. Or even better, the player creates ‘B’ all on their own, and the entire world reacts to it. When a player can literally see themselves as an agent of change, it empowers them even more.” 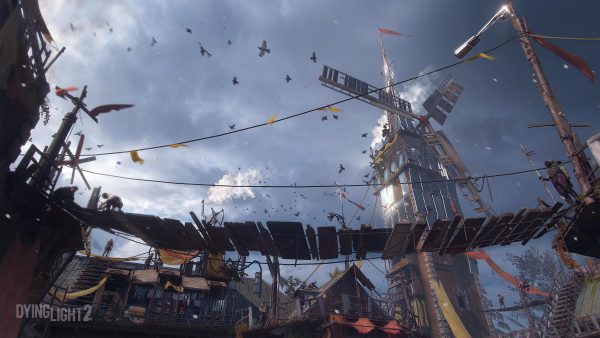 This design ethos balks at the idea of making you follow a breadcrumb trail. Instead, you are free to experiment and your actions shape the world and your character, rather than a story shaping the protagonist in a pre-defined way. The idea behind Dying Light 2 is to create “an open story that complements an open-world game.”

The concept has been the same since the very beginning, and Avellone has been on the project since that planning phase. He created the lore for Dying Light 2, he co-created the storyline along with the other talented writers, and he developed many of the game’s critical characters. The reactivity, which Techland dubs the ‘World System’, was also co-created by Avellone, working closely with designers and programmers at Techland. His grubby, gamesmaster mitts are all over everything.

Some choices you make will be apparent straight away, some will bite you in the ass later, just like all those zombies lurching around the streets, and all of them will shape the world, your character, and everyone you meet. Whatever state the world is in at the end, though, it will be your fault.

"I’m addicted to challenging a lot of tropes, and trying to flip them on their head and see what shakes out story-wise."

“What’s interesting about what we showed at E3 is that neither choice is a ‘good’ one,” Ciszewski says. “The Peacekeepers brutally punish any trivial misdemeanour, while the bandits use people for their own gain, but they have a different approach to punishing people. You could choose to do nothing and walk away, and that itself is going to have a different outcome, because the bandits are not going to be able to build their empire without your help. Or you could try and actually change those factions’ beliefs. For example, a new leader for the Peacekeepers may fundamentally change their entire legal system. 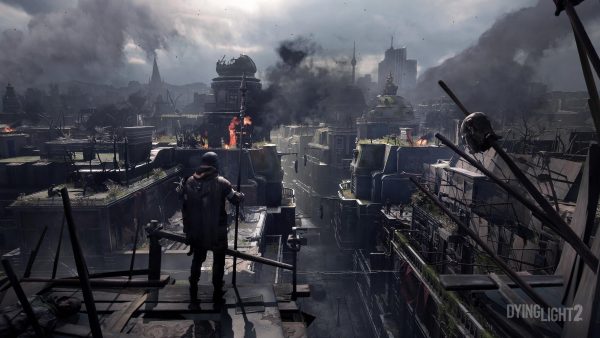 “Of course, what we’ve shown you is just one way this entire scenario could have played out - the protagonist enters the water tower with information about a Peacekeeper emissary. If the player had entered the tower with different information, the whole scenario could’ve taken a completely different course.”

When asked about these choices, whether there’s right and wrong, good or bad, Techland describes them as “shades of grey”. I prefer this to the binary good and evil choices of some older RPGs, but it does make you worry if the game will have anything to say if it’s not taking sides. Luckily, Techland isn’t planning to shy away from its political overtones. Ciszewski just wants you to discover the message for yourself.

“There is a stream that runs through Dying Light 2; a common thread that ties together everything that we do,” he says. “But I don’t want to spell it out. I’d prefer players to experience it at a subconscious level.”

Dying Light 2 might be a zombie game, but there are some brains pulsating beneath that squishy exterior. From what we’ve learned so far, it will be unlike any zombie game you've played before.

“I’m addicted to challenging a lot of tropes, and trying to flip them on their head and see what shakes out story-wise,” Avellone says. “I also tend to favor antagonists and rivals that have a higher agenda – not because it makes them superior, but because ideally players don’t just want to prove themselves physically superior, but they also want to challenge your enemy’s philosophy to the point where it breaks down… which I see as a far superior victory to simply punching an enemy’s lights out.”