If modern politics have taught us anything, it’s that civilisation is a stubborn bastard.

The Division 2 takes place seven months after a pandemic outbreak in New York. Over 200 miles away in Washington DC, society has also collapsed. I have no idea why. I could google the official plot synopsis and rewrite it like I’m sure some reviews did, but here’s what I gathered from actually playing the game.

Nature has reclaimed the city. In just seven months, vines snake their way up buildings, roots break through the roads, and deer prance around the streets. Whatever happened, people abandoned their cars, but they still had time to make sure all their rubbish was in nice big piles around the city. The garbage collectors are all dead.

At one point, I shoot some men so I can create a fresh water source for an encampment of survivors. This is a world where people don’t have access to water or crops, but everyone has exploding remote control cars. Priorities were pretty messed up when the apocalypse went down. Of course, everyone has the most important thing you need in a survival situation: a gun. “Did you own a gun? Did your neighbour?” the intro asks, definitely not holding up a mirror to the very real gun ownership debate in the US.

Multiple factions are vying for control of the city, but all you need to know is that your violence is justified. You are free to wander the city shooting down the bad guys. You are the Sheriff. You know they are bad guys because they scrawl things like “DRUG KITCHEN” in graffiti, with an arrow next to it pointing to their drug kitchen. Some of them have flamethrowers. “Did you own a flamethrower? Did your neighbour?” I ask, genuinely curious because who the fuck has a flamethrower?

Some areas of the city are quarantined off and filled with really cool guns and kneepads. You can get in, shoot some people, grab some new marigolds, and extract those marigolds by helicopter. Other players can steal your marigolds, but you can also shoot them and steal their marigolds. There’s some narrative justification for this, but all you need to know is that this is where you go to have fun in The Division 2, and it’s where the game is most interesting mechanically, full of betrayals and last-minute victories. It’s called the Dark Zone, which ironically is what my brain turns into whenever a character speaks in The Division 2. 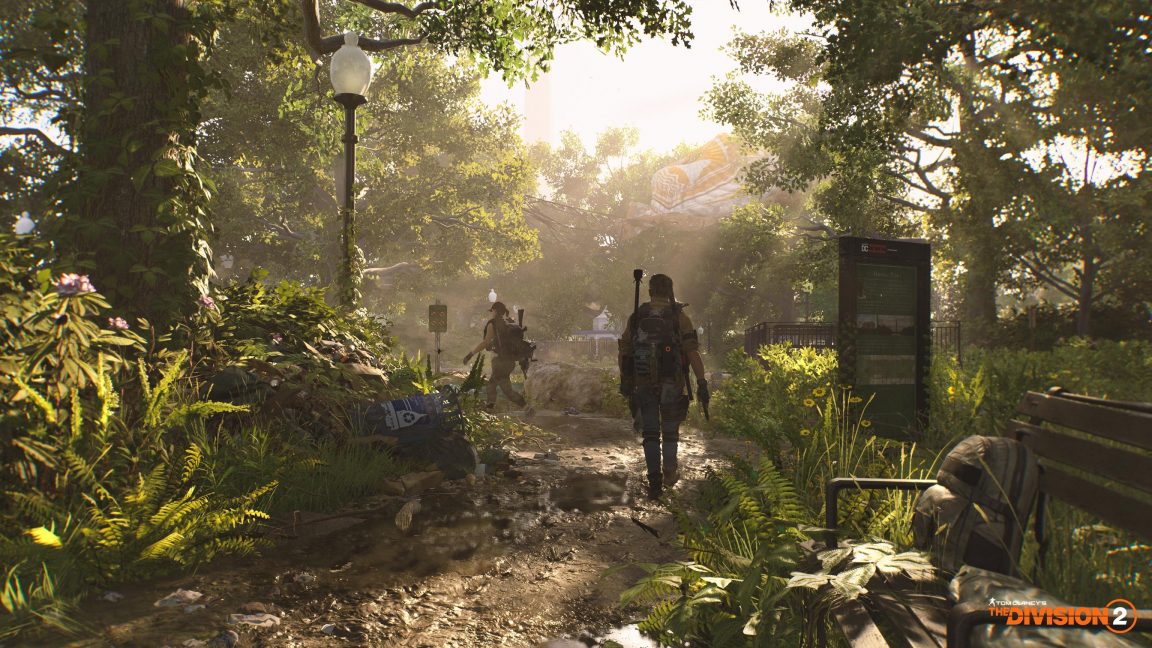 Ubisoft made it clear that The Division 2 had nothing to say pre-launch. To its credit, it was totally right. It has nothing to say at all. It’s a game about holding down a button and watching numbers pop out of a man, getting stronger by finding more loot, then doing it all again. There’s nothing like the surge of accomplishment you feel from securing a high-end, tactical bumbag.

Unlike the first game, most of the cosmetics are locked behind a paywall. You can upgrade your armour all you like, but cosmetics are slowly drip-fed via occasional free lootboxes and rare finds in the world if you don’t buy them with in-game currency. There’s something ridiculous about the flashiness of the light-show reveal when you open one of these containers only for it to present you with a pair of beige boots. Still, there’s something to be said about how Ubisoft managed to make such boring loot feel compelling because of the stats and perks associated with equipment - character builds actually matter here, especially in the late game. If only it didn’t require constant micromanaging in a messy UI, though that micromanagement is admittedly a symptom of the game’s generosity.

There’s so much stuff here. There are multiple Dark Zones which all offer their own take on The Division’s unique PvEvP multiplayer, there are dozens of main missions, even more side missions, gruelling strongholds, competitive multiplayer, and more. Towards the end of the game, the missions offer a real challenge as well. They require actual teamwork. Despite how dumb the premise is, the game is the most tactical and thoughtful looter shooter out there. 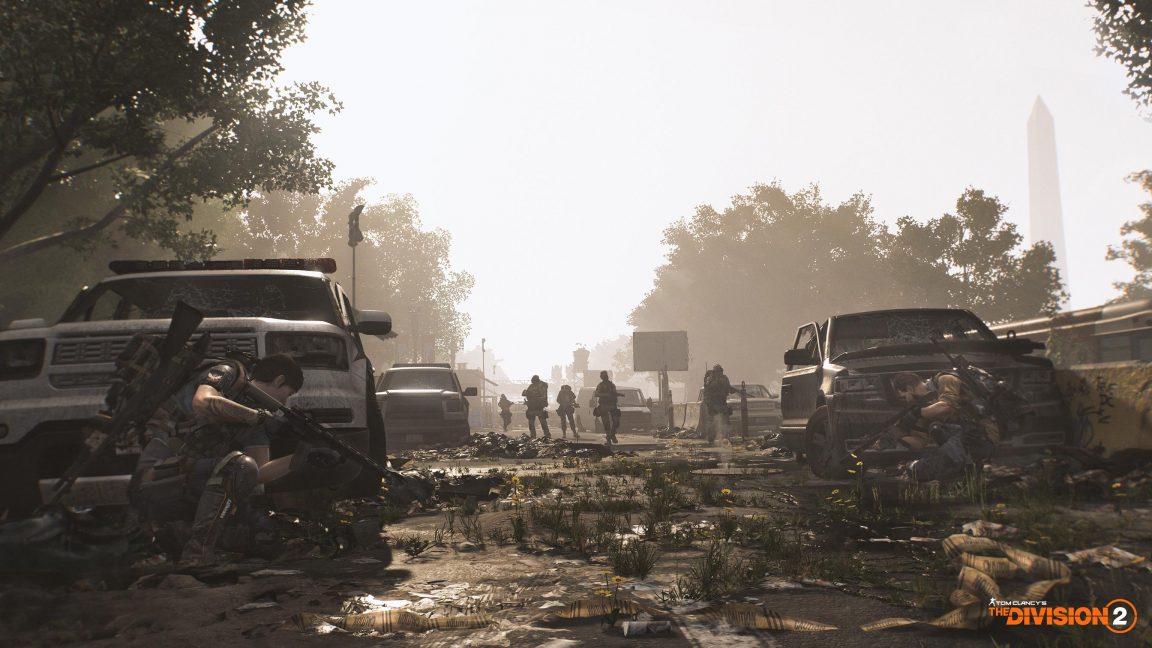 The missions feel tailor-designed and there are a couple of real standouts, with shootouts inside planetariums and museums offering a much-needed break from boring, samey city blocks of the open-world. That overworld, while a painstakingly impressive recreation of Washington, unfortunately feels like a barrier to fun, particularly for solo players.

Enemies block off most of the routes, forcing you to fight or take the long way around. If you die, you have to slowly trudge across the map again. Sometimes enemies spawn right on top of you. I’ve been stuck inside walls. Occasionally your suggested mission bugs out and you have to just guess what you should do next. Rappel ropes forget to work from time to time. Towards the late game, my turret ability began self-deleting in the middle of intense firefights. Bugs are to be expected in a game as huge as this, but they compound one of The Division 2’s biggest issues: it often doesn’t feel like your fault when you die.

Ubisoft was kind enough to make sure we know where the drug kitchen is, but there’s no signposting at all for enemy spawn areas. In missions, it’s easy to push up to flank an opposing force, only for a new group of enemies to spawn in behind you and kill you instantly in the next wave. It feels like the game wants to constantly slow you down and block progress. One late mission saw me shooting a fuel tank for a solid minute, expending all of my ammunition. I then shot another fuel tank for a full minute since that was my objective. Immediately after I blew up the second, another swarm of enemies appeared right next to me and killed me. I had to start the entire section, and shoot both fuel tanks, again.

Of course, all of this comes with that old caveat: this is a service game and things might change. I’m not always convinced games will improve all that much post-launch and I can only review what I’ve played, but Ubisoft has a good track record of making games far better than they are at launch with frequent updates. For now, I have to at least commend The Division 2 for getting the basics right. There’s a compelling endgame, there’s loot that actually matters, and missions don’t feel like they’re copy and pasted to bulk out the runtime. If some of the frustrations can be ironed out, it could be the best of its genre. But for the love of god, please let your writers say something if you ever make another one.