There’s a point about a quarter way into Days Gone where our hero, Deacon St. John, finds looters wrecking the church where he married his missing wife.

Deacon is a drifter who makes a living hunting bounties across the Pacific Northwest, monetising the post-apocalypse. He never hesitates to use his gun, though he doesn’t shoot women unless he has to - it’s his code. He’s like a sexist, murderous Batman who wears a backwards cap and a biker gang cut. Twatman.

In my playthrough, I clear the holy site with an LMG and grenades, then Deacon does the only logical thing: firebombs the church so nobody can vandalise it ever again. 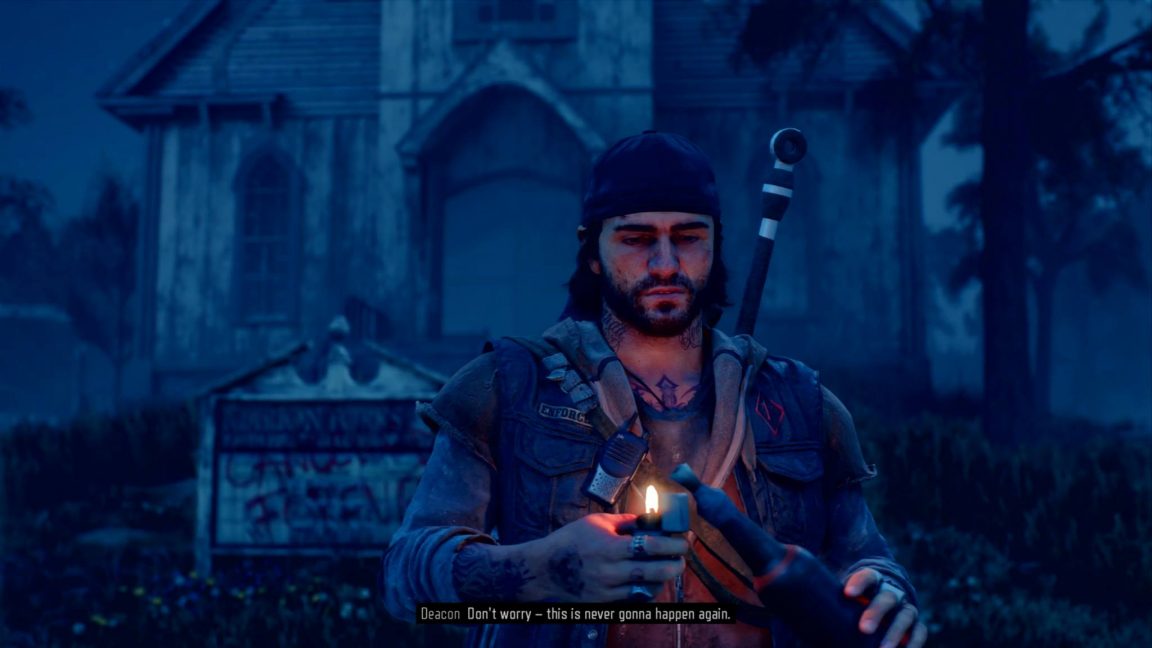 This is a world where many of the characters inexplicably don’t know what antibiotics and lavender are. “Those anti-whatever-they’re-called,” multiple characters say. “There’s this rare plant called lavender,” says another.

It’s a world where the anatomy of the big, brutish not-zombies (they’re called freakers and they’re functionally identical to zombies, but they shit themselves) is explained in an audio recording. Apparently this particular breed of freakers were steroid abusers before being infected. Deepest lore.

There are two things that set Days Gone apart from other open world games: the fact that a motorbike is your main form of transportation, and there are sometimes thousands of zombies on-screen. The bike is genuinely refreshing - deserts, mountains, and mud-tracked forests take advantage of your maneuverability, and you feel every bump and slide. The hordes are visually impressive, stressful and exciting to deal with, but woefully underused.

The plot’s driving force for the first third of the game has you waiting for your best friend to recover from an injury so you can ride north. While you wait for your buddy, Boozer (I swear I’m not making these names up), you ride between encampments and do odd jobs, all while trying to find out what happened to your wife.

You’re told Deacon’s backstory via flashbacks of the world before a virus turned everyone into incontinent zombies. You also see how Deacon and his wife were separated in a sequence that feels like a straight-to-DVD rip-off of The Last of Us’s prologue. 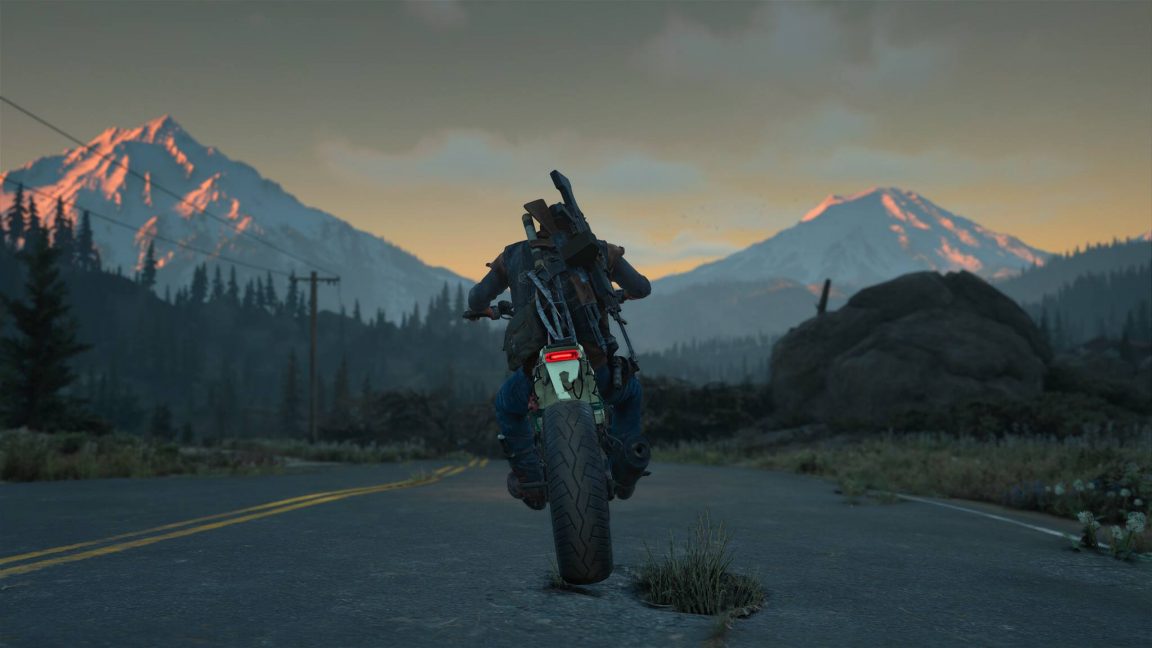 To earn these flashbacks, you either drive to a grave site and listen to Deacon monologue about accountants and other mundane stuff, or you tackle one of many instant-fail stealth missions. These quests have you infiltrating government agency landing zones and eavesdropping on scientists. They’re easy enough, but they’re repeated far too often and your only punishment for failure is having to listen to the same dialogue again and again.

Listening to the same dialogue on repeat is Days Gone’s kink. It constantly replays conversations for no reason at all. As you explore the open world, radio transmissions come through from characters you’ve met, and there’s so many of them that the game seems to get confused about which ones it’s already played.

Those radio conversations, as well as the chats Deacon has with passengers on the back of his bike, clearly weren’t performance captured. The acting in cutscenes is great, with emotions often subtly portrayed with a glance or a slight grimace, but Deacon is in a world of his own when riding his bike. There’s a truther radio station that broadcasts throughout the entire game. Every time the transmission ends, Deacon screams back at the host (who obviously can’t hear him) in one of the most jarring instances of overacting I’ve ever seen.

There are other instances where the sound is completely borked. Sometimes, your motorbike’s engine doesn’t make any sound at all, or a distant freaker will scream as if it’s right next to you. Sometimes your guns stop making any noise. Occasionally Deacon shouts over his bike engine when you’re on foot, making him appear deranged. 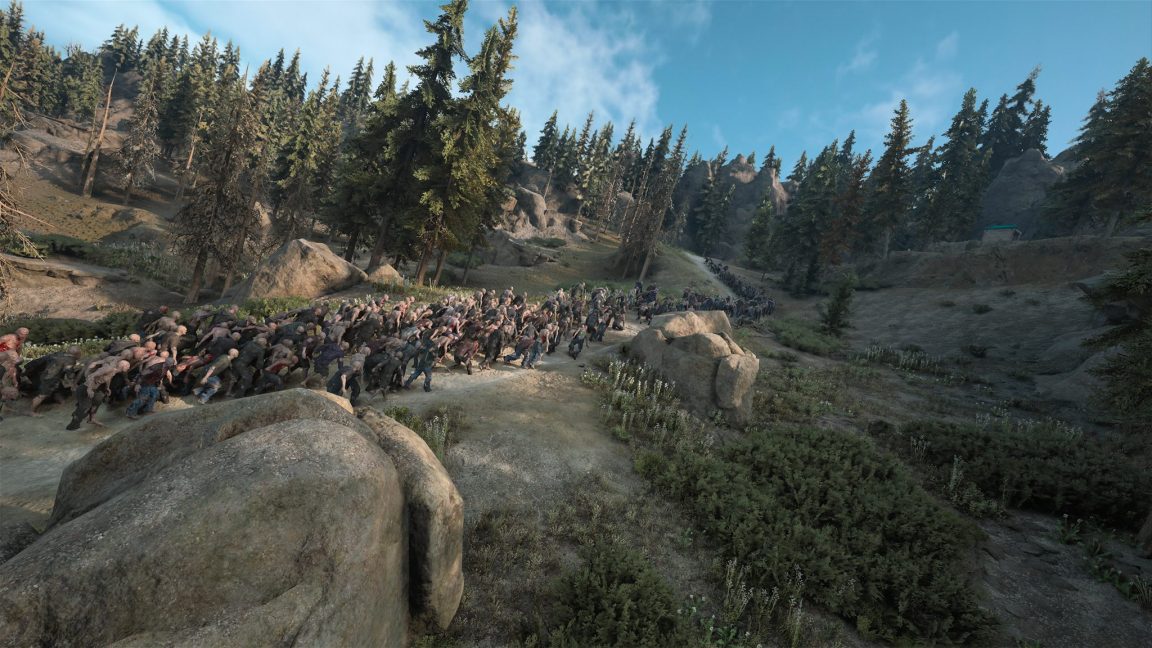 I’ve had instances where the world fails to load in and I’ve fallen through the map to my death. I’ve been running away from a horde of freakers and accidentally clipped through a truck before its textures and collision loaded in. I had a boss fight with a mutated bear where it just stood there and allowed me to throw molotovs at it until it died. I’ve ran through a tunnel to clear an enemy base, only for all the enemies to spawn in behind me. It’s an extremely pretty game - particularly during sunset and snowfall - but it’s a technical mess.

This is before even getting into how prescriptive it is. “This world comes for you” is the game’s tagline, a marker of the developer’s intent. Sony Bend wanted to create a game where the world is threatening and unexpected things can happen as you explore, creating personal stories. In reality, it's a handful of things that can happen in the world endlessly repeating. In missions, it wants you to play a very specific way, too. Go slightly off course and a warning flashes up that you’re leaving the mission area. Keep going and you’re back to a checkpoint.

In one mission, I’m driving a girl across the map to a nearby camp. We come to a tunnel and it quickly becomes apparent that this is a trap. I’m expected to get off my bike, kill all the enemies, then go back to my bike and ride through. Fuck that. I just ride through with the kid still on my back seat. As soon as I exit the tunnel, both of us fully intact, I get a mission failed screen for leaving the kid behind - the kid that’s on my back seat.

One of the ways the game attempts to create drama in the open world is by making fuel a resource. If you run out of fuel while exploring, you have no choice but to slowly walk your bike to find some. Fast travel becomes locked out. If you’re nowhere near a petrol station or jerry can, fuck you - all you can do is beg for a hill so you can careen for a while. It might make sense on paper, but even Mad Max - a game set in a world where petroleum is gold - provides a crutch for when fuel stores run dry. It’s the kind of thing you thought would be cool in GTA when you were 13, but is actually extremely shit. 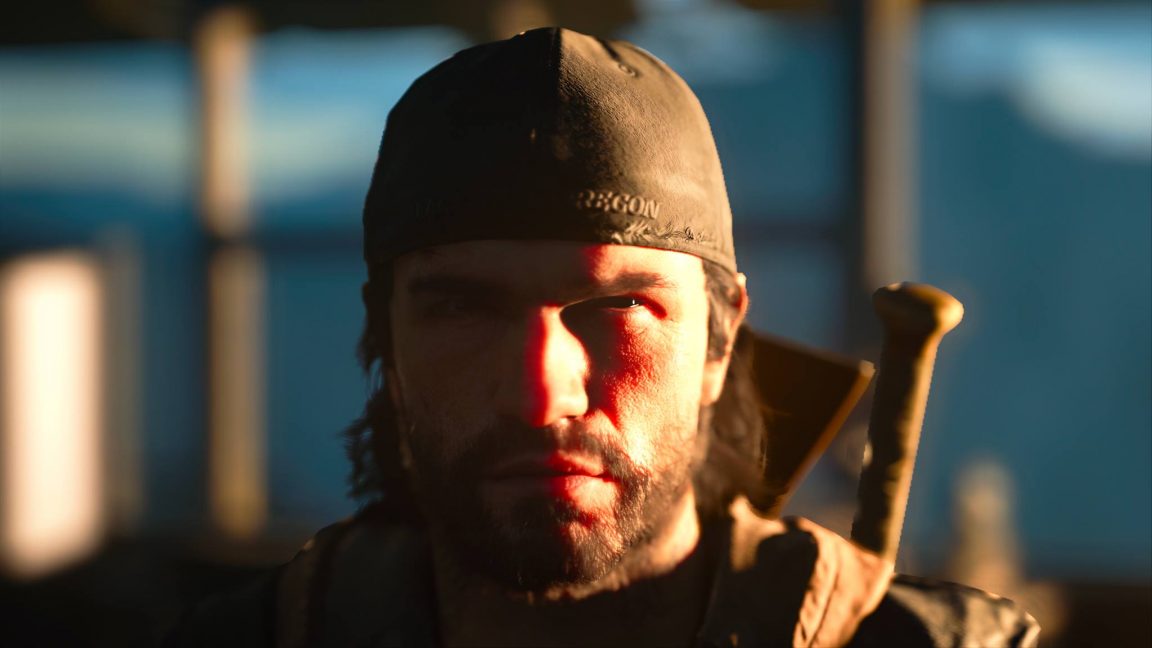 Running out of juice isn’t even the only way you can decommission your bike, either. If you get ambushed by survivors - sometimes with wire pulled across the road, sometimes by a sniper - your bike gets wrecked. If you’ve used all your scrap and you’re nowhere near any abandoned cars, you’re in for another slow walk until you find something. Once you’re used to filling up your fuel and collecting scrap at every opportunity, you can negate this all through careful play, but then topping up fuel and scrap becomes a needless layer of busywork instead.

Days Gone is a huge, generous game, even if you just mainline the story, but it does everything in its power to pad itself out. Even fast travel is locked behind monotonous repetition. If there are any infected nests between you and a fast travel point, you can’t fast travel - you have to clear out the nests first, which plays out exactly the same every single time.

It’s frustrating because the game does pick up in the second half. There are glimmers of Red Dead Redemption in some moments - it’s clear there’s some inspiration here - but it constantly lets itself down with bewildering decisions that pull you out of the fantasy, rather than reinforcing it.

The lack of seamless transitions between gameplay and cutscenes means you’re often staring at a black screen as the game interrupts you, the story is predictable, your activities are repetitive, and the technical issues - frame rate drops, freezes, and myriad bugs - are a constant annoyance. While it’s still slightly better than most recent Xbox One exclusives, Days Gone just isn’t anywhere near the quality of the majority of PS4 first-party releases.