Dark Souls 2 had a closed beta phase over the weekend and VG247's Dave Cook managed to beat it in well under two hours. It was an accessible demo, but the game still has great potential to make you weep. Find out why here. 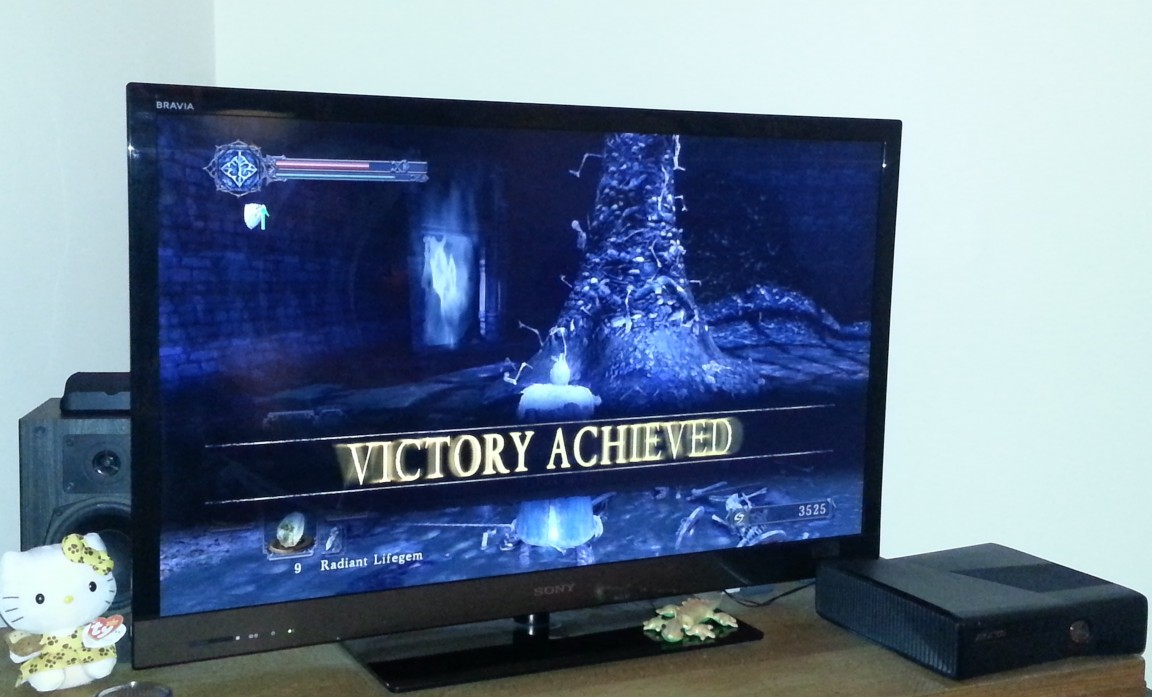 Well, that wasn't so bad. Excuse the Hello Kitty.

Namco Bandai and From Software held a Dark Souls 2 PS3 beta on Saturday. It saw 5,000 gamers tackle a new area called Huntsman's Copse across a two-hour testing phase. It was a small taste, but it was enough to master everything the demo had to offer. I have to admit I actually found it quite easy, which should be concerning seeing as the series wears its difficulty like a badge of honour.

Except I wasn't concerned. The purpose of the beta was to test server load rather than gameplay, and I got utterly battered by the Mirror Knight demo at Eurogamer Expo last month. I'm not fearful that From Software has watered down the Dark Souls formula, but there were a few elements of the trial that had me a little curious. I'm aware that betas are in no way representative of the full game, but I thought the fans out there would like to get some insight into what happened.

”The game looks better than its predecessors and handles with increased fluidity. Combat feels as weighty as ever, and playing like a hack ‘n slash will still leave you dead in moments.”

I think it's important to touch on difficulty first. One thing I noticed in both the beta and the Mirror Knight demo is that common enemies are more unpredictable. Huntsman's Copse is littered with stealthy bandits that rush you with daggers and are adept at dodging your returning attacks. Typically, original Dark Souls enemies could be read quite easily. You'd stand there with your shield up waiting to trigger a soldier's attack animation, and then simply step back while it swiped at thin air. Once the barrage was over, you could then step in for some free hits. Rinse, repeat, done.

In the Dark Souls 2 beta however, I felt that enemies possessed a greater range of attacks that changed up regularly. There are also several instances where hasty players could find themselves trapped among a pack of bandits while on precarious stone walkways. Once that happens it's quite easy to become staggered or knocked off into the abyss below. I saw a lot of blood stains in these areas - indicating that other online players had been killed there - but I think my recent obsession with both Dark and Demon's Souls made me think more strategically about my approach.

But when things did go wrong, they quickly turned catastrophic. The beta houses a dark cave area that really showcases the game's new light mechanic. Essentially, there are some areas in Dark Souls 2 that can only be illuminated with a flaming torch. The catch is that once you hold a flame you do so by sacrificing your shield. I found it to be a punishing risk-reward system, particularly in the Mirror Knight demo. In the beta however, there are a few dark areas and not a single torch in sight, unless I missed them of course. It proved savage to begin with.

The cave in question houses a grim reaper enemy that animates skeletons in the area. You can defeat the bony attackers quite easily, but the reaper continually revives them. You can quickly become swarmed in the pitch black area, and that's a real problem once you realise there are hidden pitfalls everywhere. It's one of those classic Dark Souls areas where you really need to tilt the camera so you have a constant view of ground below you, while fending off many foes. After a few deaths I figured out the best way to sprint bast the skeletons and take out the reaper first. 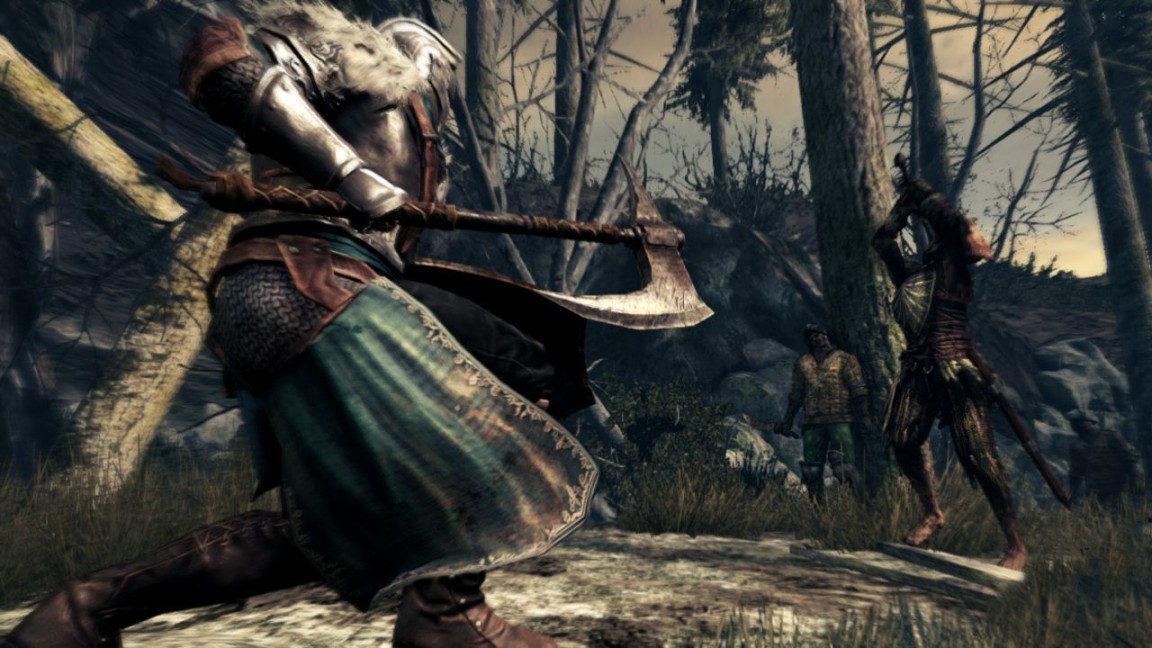 As with all 'Souls' games, working all of this out was a case of trial and error. The sense of gratification gained from finally figuring out one of these 'puzzles' hasn't been lost in the transition between directors. I also noticed that the amount of AI Black Phantoms has increased across the beta and Mirror Knight section. They teleport into your world and have great potential to catch you off guard. While walking along a steep cliff-side a Black Phantom warped in from either side, essentially blocking me off in both directions. It's a sneaky beginner's trap, but it's classic Dark Souls.

So while I finished the Dark Souls 2 beta in under the two hour limit, I still died a few times while figuring out the area. It's a dank, depressing environment littered with dark forests, ruined keeps and mouldy caves. The series hasn't lost its ability to draw you in with its bleak tones, but perhaps even bleaker is the game's new punishment for death. Die and you lose a chip off your total health. This happens every time you are killed up to 50% of your health, so repeated death can absolutely result in your max HP being halved. It's utterly sadistic.

”As with all ‘Souls’ titles, you can still use the pillars to block and confuse the AI while swiping through them to land cheap hits. I don’t feel bad about exploiting the scenery in this manner because it’s a trick that’s supposed to be used, and I guess this perhaps sums up why I found the beta relatively easy. I know these tricks now. I’ve been spamming them for the past year.”

I thought that killing the beta's boss would see my health restored, but it didn't work. Levelling your vitality stat doesn't work either. I found out that you can use Human Effigy items to return your hero to a human state however, and this reverses the effect. This has the potential to prove torturous for careless players, and I'm hoping there's an item like the Demon's Souls Cling Ring to boost your max HP when in a pinch, but I'm not that optimistic. They are evil sods after all.

Unfortunately however, this brings me to my biggest gripe with the beta. In Dark Souls your only methods of replenishing health were Etsus Flasks gained at bonfires, vitality spells and certain accessories. From Software has added new Life Gem items into the mix, and during the beta I acquired a vast quantity of them as loot drops from fallen grunts. Etsus Flasks will top up your health quickly, but using them roots your character to the spot, while Life Gems can be used while walking slowly but refill your health gradually. They work in different ways, but I never felt too threatened as I had so many gems in my inventory.

I get the feeling this is a balancing issue that will be altered come the game's March launch. I also feel that Huntsman's Copse is one of Dark Souls 2's earliest areas, so I'm not too surprised that it is a little easier than the Mirror Knight demo. That said, if From Software don't get the Life Gem drop rate right it could serve to make the experience too easy and therefore less gratifying. I'd like to think the studio knows better than that however. I have faith in them.

These issues aside, the game looks better than its predecessors and handles with increased fluidity. Combat feels as weighty as ever, and playing like a hack 'n slash will still leave you dead in moments. The UI has also been improved as you can now see what's next when scrolling through your spells, weapons and items on the quick radial. There's also the option to hold up to three pieces of gear in each hand, furthering your load-out options. All of this built up to the beta's Skeleton Lord boss, who I managed to kill using a series of classic tricks and my wealth of Life Gems.

The battle starts off in a chamber filled with bones and pillars. It's similar to the Four Kings battle in the original Dark Souls in that three separate bosses will float towards you and unleash their attacks at once. The key is to take them all out as soon as possible. Once you do however, they each explode and spew an army of skeleton footsoldiers and pinwheel enemies into the arena. They can overrun you in moments if you get backed into a corner. As with all 'Souls' titles, you can still use the pillars to block and confuse the AI while swiping through them to land cheap hits.

I don't feel bad about exploiting the scenery in this manner because it's a trick that's supposed to be used, and I guess this perhaps sums up why I found the beta relatively easy. I know these tricks now. I've been spamming them for the past year and a bit in my attempts to finish Demons and Dark Souls before Dark Souls 2 launches. They're fresh in the mind, so I feel that those who have taken a break from the series may have greater difficulty in passing this particular area with ease. At least I hope it's just me.

My minor complaints aside, I'm looking forward to playing the full game and seeing what the rest of you think regarding the difficulty.

What's your take on what you've seen and heard so far? Let us know below.