Call of Duty: WW2 microtransactions, otherwise known as COD Points, are now live across PC, PS4, and Xbox One.

COD Points were initially planned to be available in Call of Duty: WW2 last Tuesday, but server issues and empty Headquarters took priority.

Now that most server problems have been fixed, and Headquarters have been repopulated, Activision decided to enable them. The published had delayed COD Points launch to this week, and they went live overnight in all regions.

In Call of Duty: WW2, COD Points work the same way they have in every other Call of Duty game that featured them. They're used to buy Rare Supply Drops, both the multiplayer, and Zombies variants. The previously leaked Epic, Legendary, and Weapon Supply Drops are not currently in the game.

What did get added was a whole lot of weapon variants. These are only cosmetic at the time of writing, and most of the time they grant bonuses like 10% extra XP and things like that.

You can manage all of this at the Quartermaster, available through the menu or by visiting the Headquarters. This is also where you can spend real money on COD Points. You have the choice of a few different points bundles, going all the way up to $100. 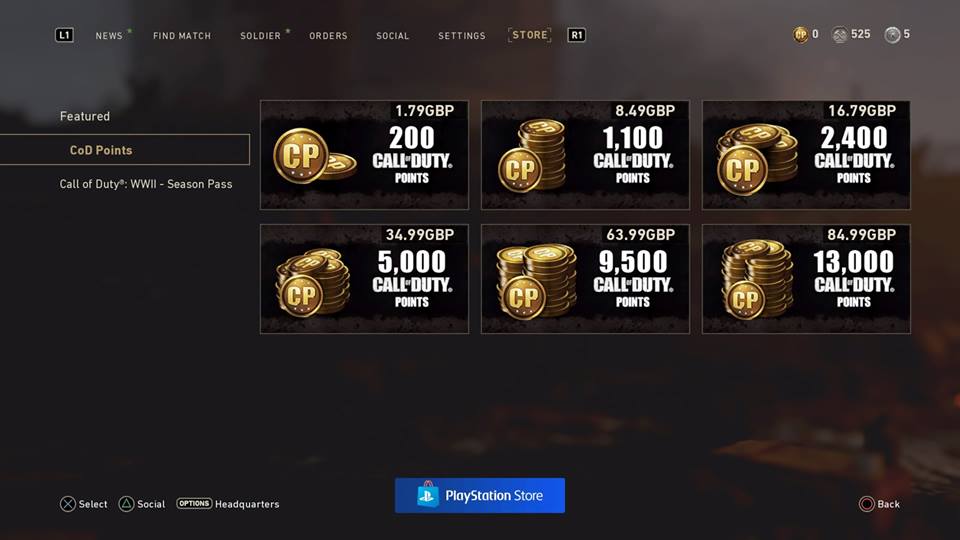 Here are the prices in USD, followed by GBP:

As you've probably guessed, given the exchange rate, a Rare Supply Drop will run you $2 / £1.80. If you purchased Call of Duty: WW2 digitally, you should already have 1,100 COD Points waiting for you.

We'll bring you all the new weapon variants later today.