Dishonored 2 introduces two playable protagonists, and even though you spend the whole game looking out of their eyes, you should never have any doubt as to which one is the hero. 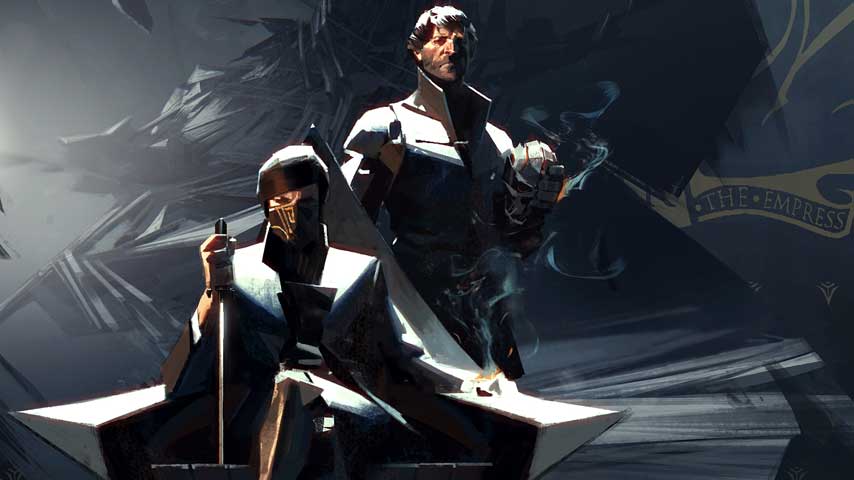 Promotional art for the first Dishonored usually focused on Corvo's mask, but this visual theme raised a problem for Arkane: it didn't communicate the fact that Dishonored 2 features two different playable characters. How do you show that it's Emily and not Corvo (and vice versa) when their faces are hidden?

"The mask was a good tool for the marketing, but to me the mask was just an accessory. To me it is important that the guy behind the mask has to come out."

"It was important to show that we have two main characters because this is one of the main features of the game," Arkane art director Sebastien Mitton told us.

"I know we struggled a bit… with how we can show Corvo behind a mask that looks badass, but at the same time, we have Emily. Does she wear the mask? Does she use a scarf? Does she use nothing?"

Looking at Dishonored 2's promotional and concept art, we can see how Arkane and Bethesda solved this issue - Corvo sticks with his iconic mask, while Emily uses a scarf, and we usually see both characters unmasked. But the differences don't end at their choice of face covering. 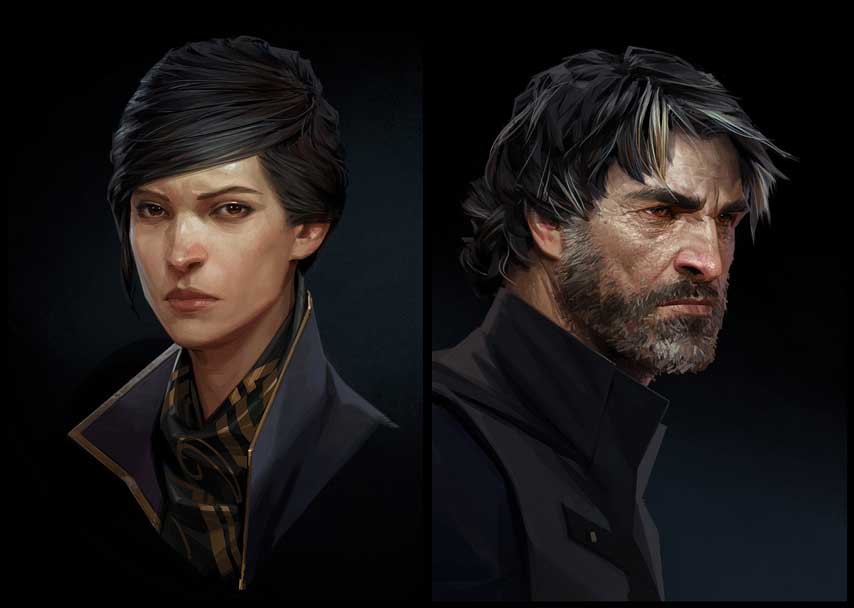 "As we developed each character’s own set of powers and weapons, we decided to differentiate them a bit more in the distance, not just while looking at their face," Mitton said.

"We focused a lot on making them unique – Corvo and Emily. But also we focused on the empathy that we can create because they are father and daughter and that’s really important in the story and the arc you experience while playing the game. I think that some people know information about the premise of the game, but this is where it all starts, so it was important to display this and nothing else."

That's likely why we see Corvo standing protectively behind the throne while Emily sits in it; it immediately tells the viewer something about their relationship. In Dishonored 2 Corvo is more than the vengeful assassin of the first game; he's an active father, a bodyguard, and the Royal Protector, a power in the empire. 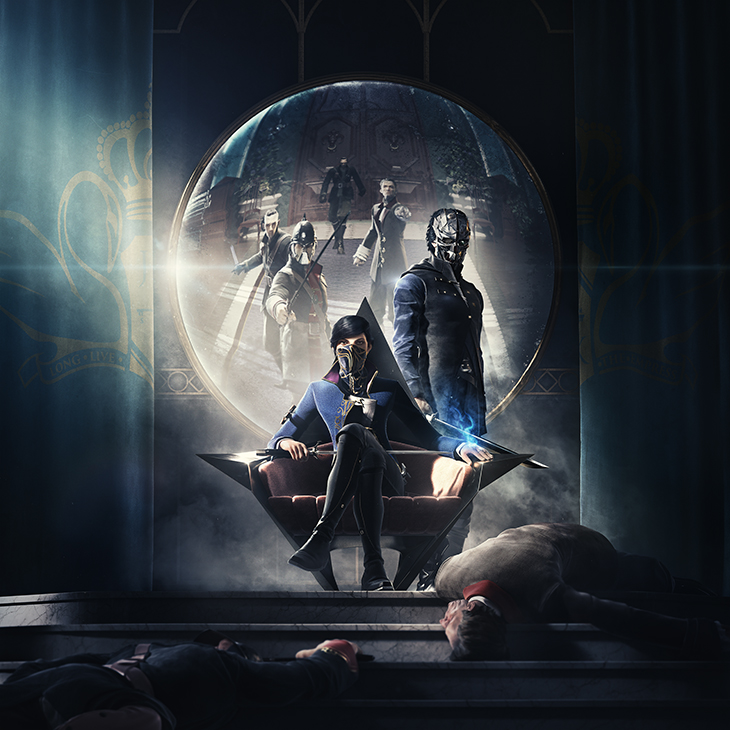 Although Arkane worked hard to make Corvo a cool-looking protagonist for the first Dishonored, this changing role gave the team the opportunity to give him a makeover.

"I was not super happy with the design of the outfit in the original Dishonored. This is why we decided to redo it for Dishonored 2," Mitton said.

"It makes sense, because 15 years later, I don’t see him in the same outfit. We focused a lot on him. To me, the mask was a good tool for the marketing, but to me the mask was just an accessory.

"To me it is important that the guy behind the mask has to come out – it’s the same for every character’s outfit. Their clothing is background for the player about those characters. If these people are important, their costume will tell you that." 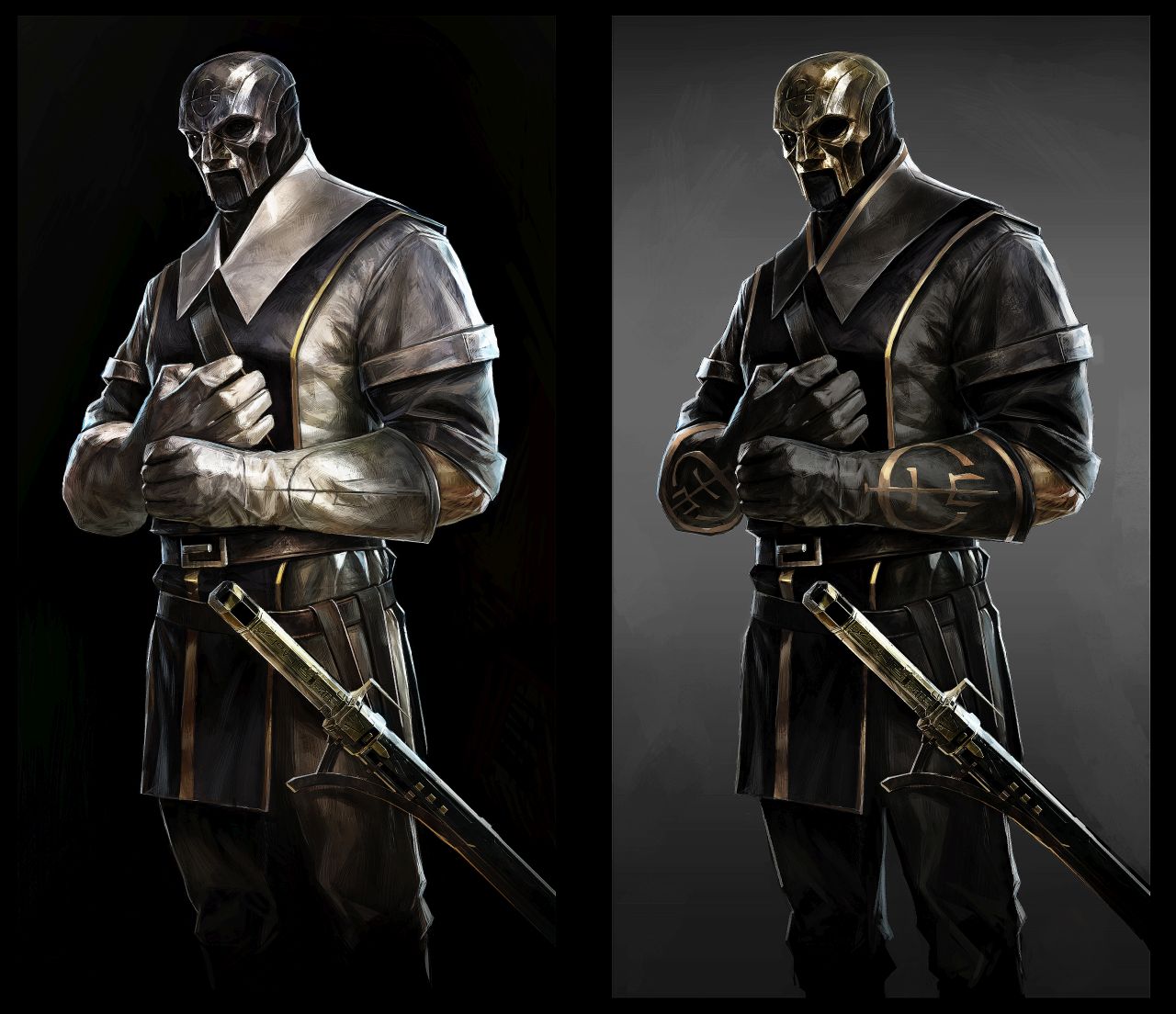 Dishonored 2 and its precursor are frequently described as steampunk (or whalepunk if you will), although Arkane itself has tended to say Victorian in describing the fashion and design. Because it's a fantasy world it doesn't have to have a strict real world equivalent, and Mitton said Arkane drew on references from the early 1800’s to the early 20th century.

"It’s the clash of these periods that creates a new style in the game," he said. "It’s not all that Victorian look - maybe for the aristocrats, but for all the other characters it’s early 20th century in Karnaca.

"For example, you have higher cut pants, that’s one element. We tried to be not too modern otherwise it doesn’t work in the game.

"One of the most known references is Burberry. Burberry is a brand, a known tailor house in London, and you can buy Burberry costumes. And they do a really great job in crafting clothes for both men and women. They invented some stuff like the duffel coat – they are really famous for doing great stuff. We look at fashion shows, we look at Vogue magazines, old shows, we have a lot of references around fashion." 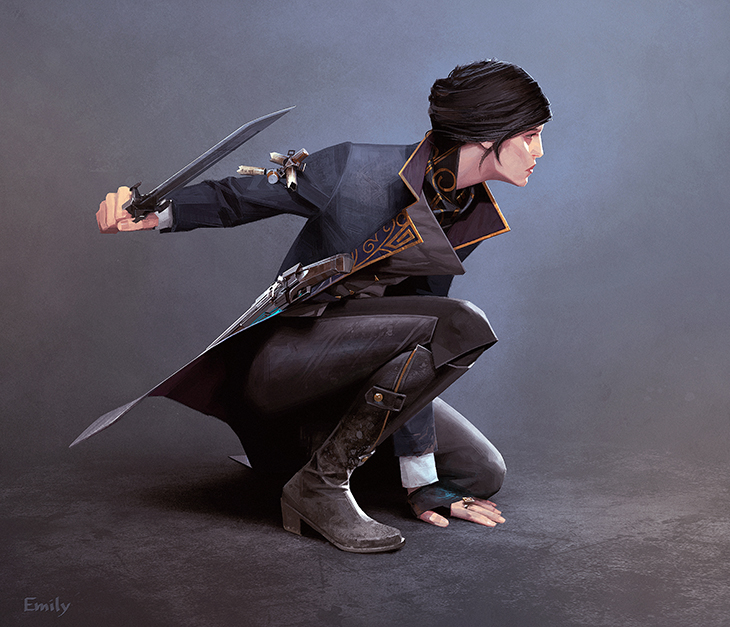 "We’ve aged Corvo and we’ve [adjusted] his anatomy, his haircut," Mitton said, returning to him as an example. "The fact that he’s an older assassin now and that he’s the bodyguard - this has to be reflected in his face.

"You have to see him as a father, but also he’s badass, so it’s a consideration we have in mind when we design or redesign old characters like Sokolov or Delilah."

Speaking of anatomy, as well as looking like an oil painting Dishonored and its sequel have a unique anatomical style to characters. Mitton said Arkane deliberately emphasises unique features in anatomy to ensure characters are distinct from each other, and rather than agree with my description of the style as caricatured or exaggerated, he called it realistic and said it draws on real life. 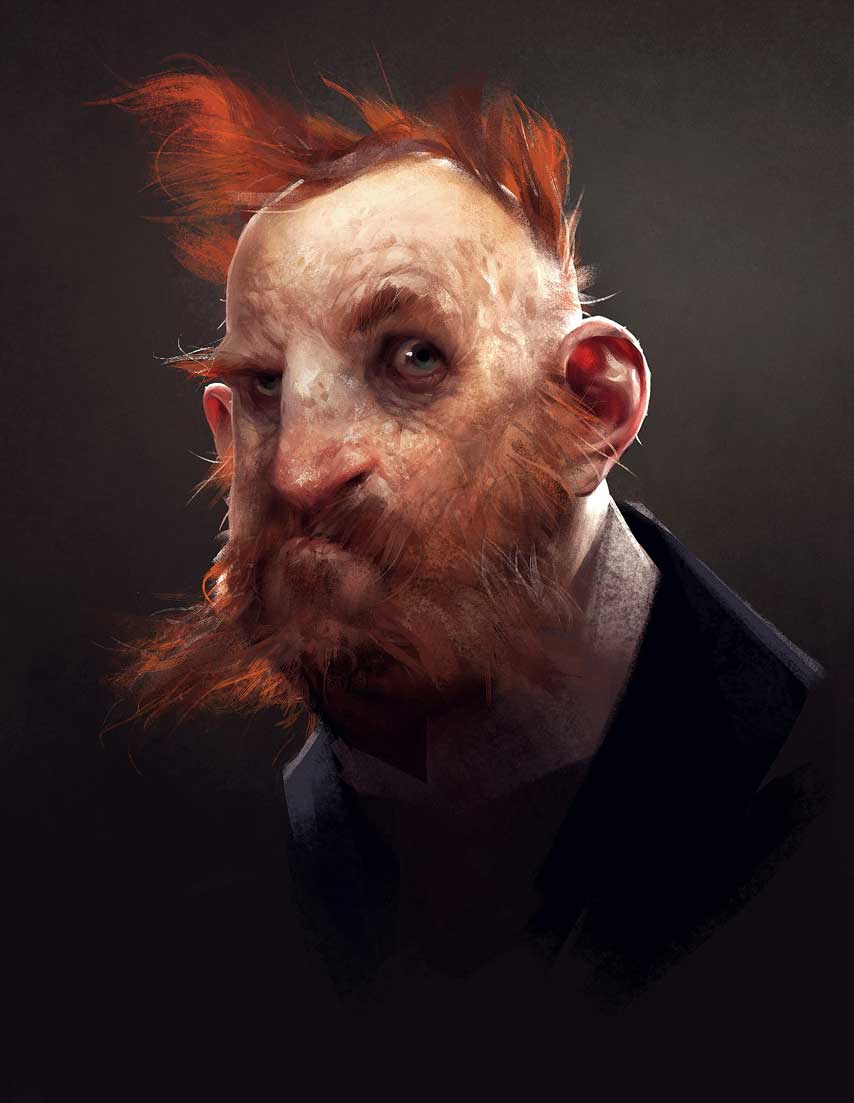 "We need quirky characters that you will fight, and that it’s important that they have worker hands just because you see them really close and because they can beat you in the face. It’s important to have realistic characters.

"There’re a lot of details that we’ve added to make them unique in a way. It’s true that they have strong faces like in old movies or in gangster movies, but they are all unique. That’s why they have this design, this anatomy in front of the character. It’s a really big part of the character design." 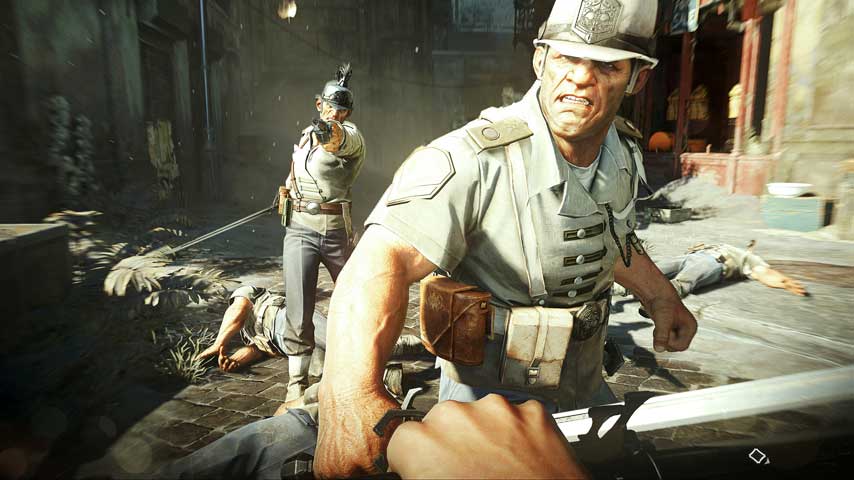 Mitton pointed out that Corvo has the same big "worker" hands as many of the grunt enemies, because he too grew up on the streets of Karnaca. Emily, meanwhile, is young and sheltered, so she appears more refined when compared to her foes.

Not too many characters are raised in royal towers, though, so most other characters lack this quality. Mitton reminded me to use the Heart, to see the beauty inside people rather than focus on their outer features. This is good advice in Dishonored 2, and also everywhere else.