I can still hear the sounds of Dunwall in my head. The grinding of industry, the dystopian alarm systems, and the idle chatter of its watchmen.

It’s been three years since Dishonored 2 released, but I can play its first level whenever I want. In my mind. It starts in a locked room. Not a prison - more like an office. It’s not the place I would have chosen to incarcerate a parkour-happy bodyguard while I staged a violent coup, but it’s the perfect tutorial space. It’s a place where the game can slowly and elegantly establish its rules.

The first thing most players will do is try the door, which is obviously locked. You can have a peek through the keyhole, however. Next you’ll learn that the world is interactive - you can spin the globe, you can eat the fruit, you can set the alarm on the grandfather clock, and you can read the letters. Soon you’ll spy the window. 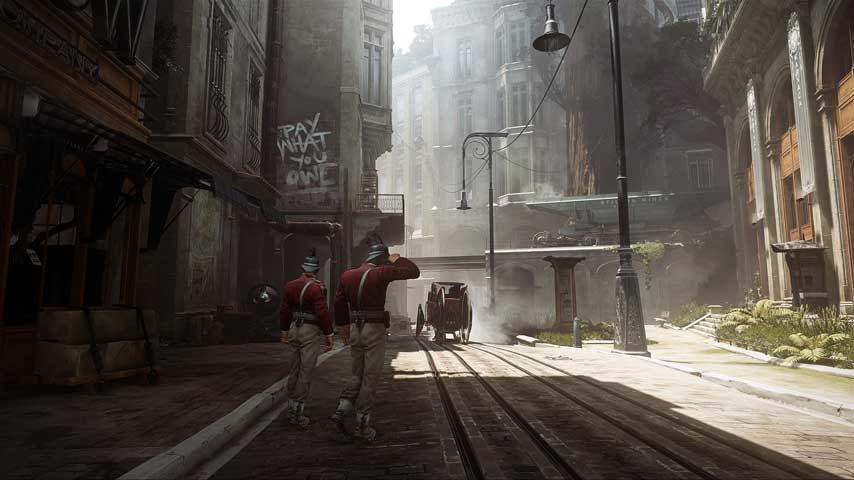 Pop out onto the ledge and you’ll see Dunwall’s silhouette, all smoke stacks, ships, and gothic architecture. You can hear the sea and the birds. You can taste freedom. But first you have to sneak back through the palace. I can recall every step of this process because I’ve been through it a dozen times. I’ve killed the guards, I’ve choked them out and tucked them into side rooms where nobody will find them, and I’ve even got through the level by only knocking guards by throwing empty bottles at their heads.

When you finally leave the palace, quietly dropping onto Dunwall’s rooftops, I can still trace the routes to the level’s end. You can go through the streets, break through an abandoned building and go around some dumpsters, or my personal favourite: simply take the train. Get to the lowest point of the rooftops and an alarm system alerts you that a train is coming. Jump down onto it, hop over the archway and back onto the train, then hop off before it goes through the tunnel and you’re home free. From there it’s just a case of diving into the drink and swimming to the ship. 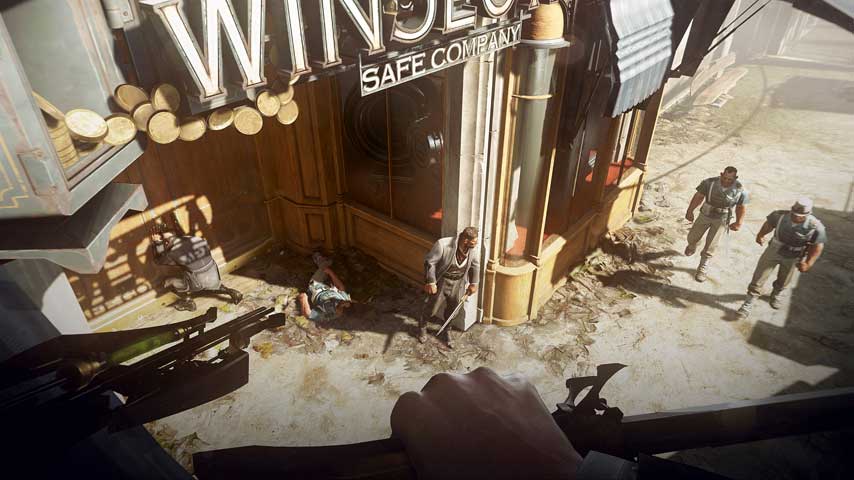 Most games are too busy making you look at the money. Have you ever played a linear third-person action game? Usually when something happens, the game either pulls the camera so you look at it, or a button prompt appears which also pulls your head to look at the explosion, the exposition, or the landmark the art team slaved over. Arkane’s games don’t give a damn if you miss stuff - that’s just part of the experience.

One of Dishonored 2’s levels is built around a time shifting mechanic. You have a device that can pull you between the past and present at the click of a button. In the present you’re exploring a dilapidated manor full of wild beasts. In the past, you’re slipping between security guards as you try to find a meeting to eavesdrop on. If you choke out the mansion owner in the past, you completely alter the present - the mansion of the present is suddenly occupied by maids, it’s more opulent than ever, and even the layout changes in certain areas. The majority of players never even see this version of the mansion - an entire level with different textures, assets, and characters.

Whatever you do in Dishonored, you feel connected to the world - you feel like you actually leave an impact. One of my most memorable moments in Dishonored 2 revolves around a door. It was locked and I didn’t have a key. I threw a sticky grenade at it and crouched on the stairs. I walked upstairs as the blast happened, striding in through the dust and smoke. In the room, bits of the splintered door littered the ground along with mugs, plates, and pans flung around by the force. A full length mirror was still swinging on the wall, and the overhead light fitting was swaying, too, causing shadows to dance, creating eerie shapes. The only sound was the creaking of the swaying light fitting. 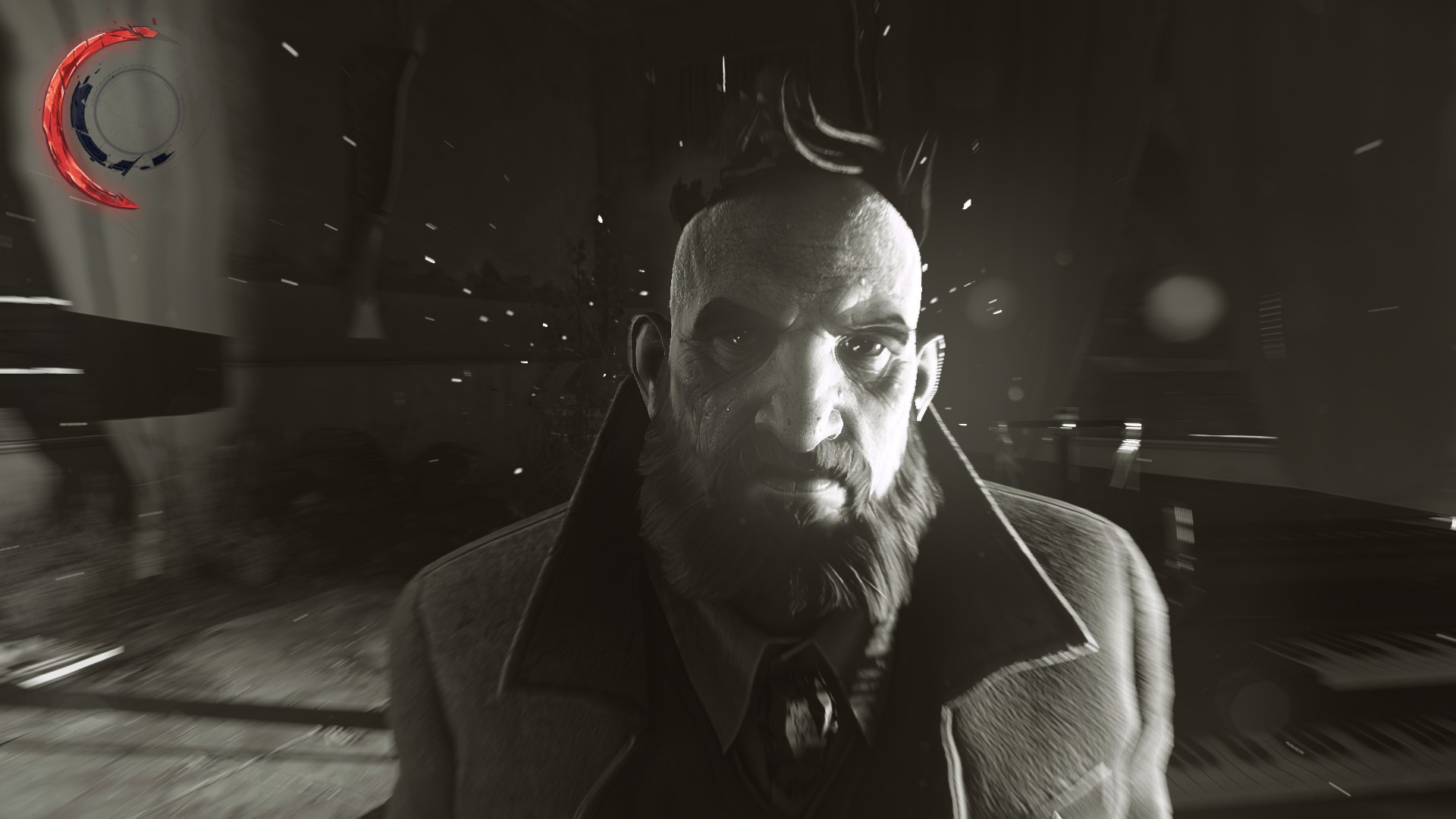 I physically altered the world to achieve my objective. There are other ways into the room, but it somehow feels like you’ve cheated because so few games allow for this kind of interaction, even though it’s completely by design.

If you use Emily’s Far Reach - a grappling hook-style ability that allows you to fling yourself around levels - you can sometimes misjudge it. Rather than being annoying, this can create unique moments from the world’s physicality as well: I’ve often sent Emily smashing through a shop window, bringing a squadron of guards down on her head.

I feel like this design ethos allows you to suspend your disbelief more than you can in other genres, and that’s why Dishonored’s levels leave such a lasting imprint on the mind. It’s not that your character did something cool while you watched - you actually did something cool, so that moment lights up a different part of your brain than something passive would. It becomes an actual memory.

It’s a feeling most developers want to tap into - it’s what they’re looking for when they tout out the term ‘emergent gameplay’ - but many don’t drill down to that key component, the player impacting the world, and instead interpret it as the AI doing something unexpected, which is only a small part of it. I wish more games would leverage the power of presence.