Injured and alone, a fiery hellscape stretches out in front of me. With the once lush evergreens charred and the rolling hills scorched, destruction spreads through the environment, infecting the buildings I’d seen as safe cover and turning them hostile - chipping away at my health as rubble collapses around me.

Normally in battle royale games it’s the other players you’re worried about, but in Battlefield 5, you’re all running from the Firestorm.

This isn’t some impotent ring gently corralling you into a set area or a cloud of vaguely poisonous gas that wears off without incident. The Firestorm is a loud and frightening tidal wave that voraciously devours everything in its path, meaningfully changing the battlefield by destroying buildings and uprooting hiding places, breaking up tense encounters and giving them new urgency.

Inside the Firestorm isn’t a fun place to be, and the threat of its twisting, infernal menace is keenly felt as you’re hunkered on the periphery of the safe zone.

It’s not just the Firestorm that looks brilliant though, everything on the Halvoy battle royale map is incredibly detailed, from the interiors of buildings to the rich and varied landscapes, which span snow-capped mountains and glittering lakes.

That signature Battlefield polish makes Firestorm the best looking photo-realistic battle royale out there, the lighting is fantastic and the small visual effects - like the way hot bullets drag lazily through the air - are unmatched.

One place that Firestorm lags behind the times though is player count. The curious decision to announce the mode as a 64-player battle royale was met with some criticism, but from my short playtime it feels like the right decision.

Halvoy is ten times bigger than Battlefield 5’s largest multiplayer map, Hamada, but given the amount of movement and vehicular options you’re afforded, it’s obvious that with another 30-odd soldiers stuffed onto the island things would start to feel very crowded, very quickly.

This is probably to do with the fact that the game engine was built with large multiplayer battles in mind already, so in first-person perspective the actual play space feels massive, but you can cover so much of it in a short time with vehicles. Making the map bigger to accommodate more players would make it an insurmountable trek to get anywhere on foot.

To start messing with the player count feels like it’d throw off some of the game’s fundamental balancing, but there’s no doubt it makes for less than exciting back-of-the-box reading.

The presentation of each match is very familiar. Pre-game you start off in a hangar with every other Tom, Dick, and Harry jumping around and being silly, before parachuting out of a cargo plane to you desired destination. From there you scavenge for equipment, build up armour, and track down as destructive a vehicle as you can find.

Firestorm is meant to be played in squads of four, which gives it a bit of a different pace to other battle royale games. More than half of players are often left standing deep into a match, leading to chaotic multi-team fights late on.

The weapons you find are organised into three tiers, with higher tiered guns featuring not just improved stats, but attachments like scopes, sights, and grips. This makes it very important to track down the best loot, since you’re at such a disadvantage with basic equipment. 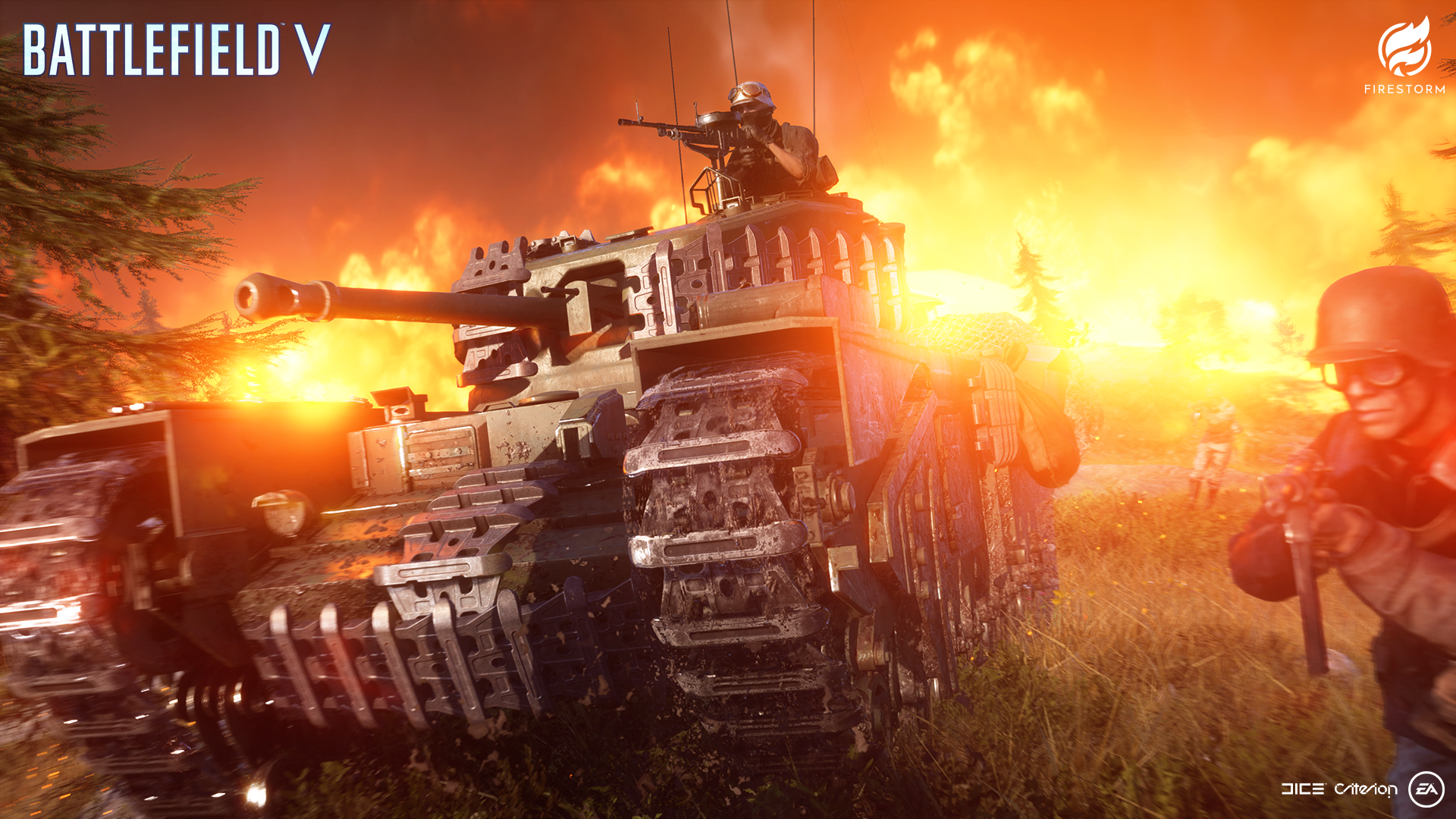 This approach streamlines your resource gathering and lessens the need for inventory management, since you’re not quibbling over which extended magazine you want to put on which gun. However it does lead to feeling a bit aggrieved when you’re melted by someone with a tier 3 super laser when all you’ve laid hands on is the equivalent of a nerf gun and some tic tacs.

Battlefield 5’s multiplayer combat translates well to battle royale, with a slightly longer time-to-kill than other twitch shooters. Armour - which you can have three pieces of - is very powerful too and often decides 1-on-1 encounters.

What sets Firestorm out from the crowd though is its bombastic vehicles, which range from farm tractors and sports cars, to giant tanks and helicopters. Hopping in a ride is one of the most fun things to do thanks to their arcade-y, bouncy handling and ability to cover ground fast.

You’ll find plenty of sets of wheels scattered around the map, but the best vehicles are locked inside of bunkers, waiting to be freed. Opening a vehicle bunker more often than not sets off squawking alarms and flashing lights so everyone in the area knows exactly what you’re trying to do, but it’s worth it to see what you get.

Although vehicles are strong, and most come with a powerful turret, a lot of safes and strongboxes you loot contain anti-tank weapons that can be used to turn the tide of battle in your favour, which stops things feeling unfair.

Vehicles are a huge part of the Battlefield experience, and Criterion deserves credit for how it has integrated them into a perma-death game mode. Their inclusion adds a much needed extra layer of complexity to the gunplay, and ups the variety in how you can approach situations.

Vehicles aren’t the only things to make their way from multiplayer into Firestorm though, with features from objective game-types making an appearance too.

Around Halvoy you can find zeppelins carrying supply drops that you cap like a Domination or Conquest point. Once you’ve captured the objective, you get the spoils. 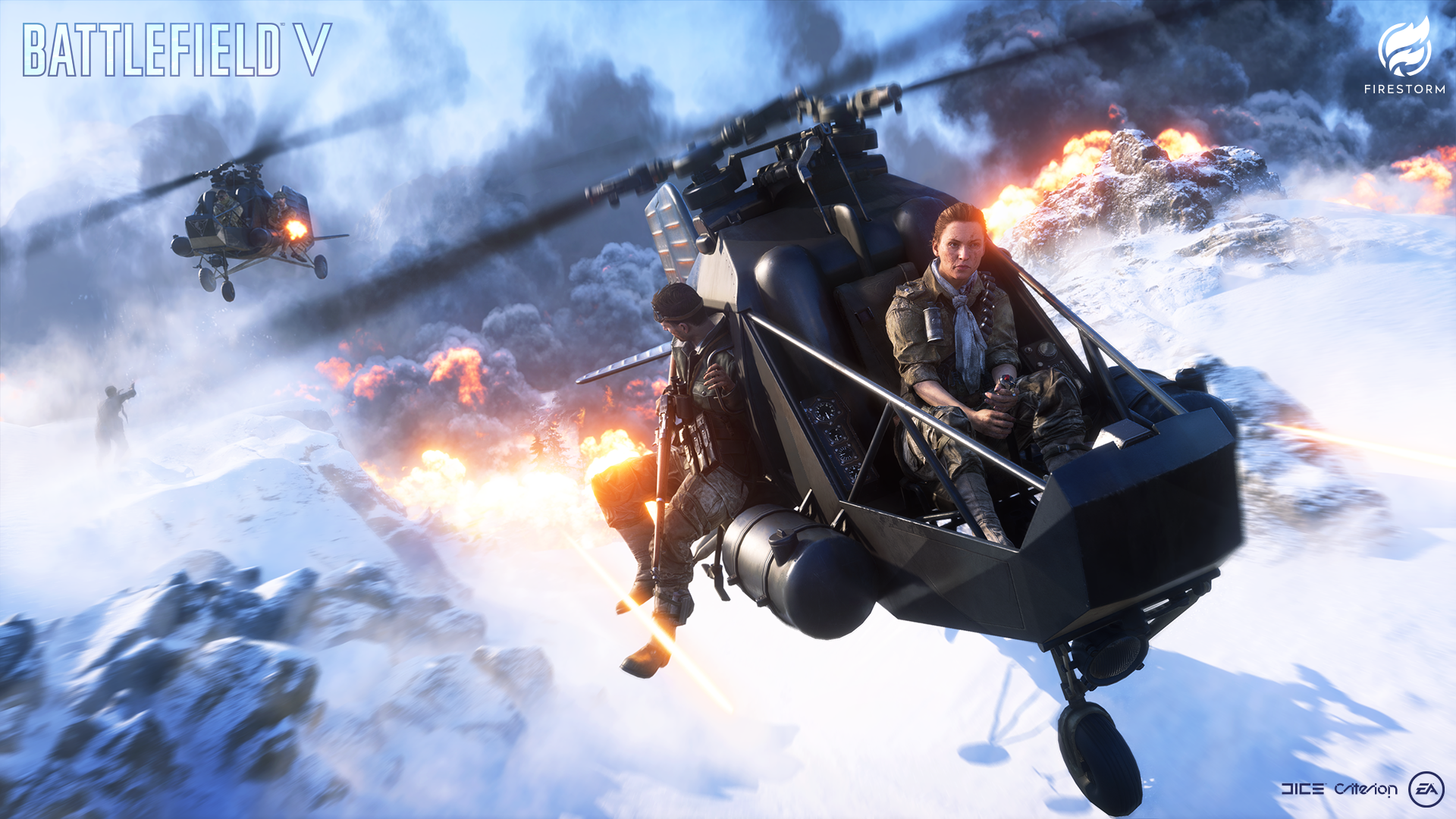 These familiar design threads help to make Firestorm feel more uniquely part of Battlefield, rather than just a hot take on a current trend in gaming. All-in-all it’s great fun, mixing tense high-stakes shootouts in varied landscapes with the team-focused, tactical and vehicular-inflected combat Battlefield is known for.

From a meta standpoint though, whether all of that’s enough to make Firestorm a success, I’m not sure.

By jumping on the battle royale craze, it’s obvious that EA wants to tap into some of the mainstream success enjoyed by games like Fortnite. But however brilliant Firestorm is, I just don’t think that a secondary mode arriving four months after the launch of a premium-priced product is going to make enough of an impact.

Battlefield 5 might’ve sold roughly 7.5 million copies, but it’s already had its chance at a first impression on the market. EA’s own Apex Legends raced to more than seven times that many players on the back of being both free-to-play and good, making Firestorm’s barrier to entry seem huge in comparison.

Firestorm not only has to convince players that it’s worth their time independently, but also to buy a game that they didn’t pick up the first time around.

Whether something is the next big thing or not isn’t the only measure of success though, and there’s no doubt that Firestorm is a top-quality battle royale experience. If you do already own Battlefield 5, Firestorm is more than worth jumping back in to check out once it launches on March 25.