One early decision could be with you throughout your time with Animal Crossing New Horizons, so you will want to make sure it's the right one for you!

Before you jet off to your deserted island, you'll be faced with a choice: which island should you choose? Tom Nook has plenty of options for you.

You'll be presented with four different choices of island by the Nook travel agency, though there are actually more options than the four you'll see, as you can see in the screenshot below. The islands you're given to choose between are based on the questions you answer previously and seemingly a random element, but you can 'reroll' your island choice by restarting the process if you wish. Here are all the possible island types we know of, as disseminated by the Animal Crossing community pre-launch.

As you can see, the island layouts vary in a number of ways. It's important to note that all islands will have the same basic resources - trees, stones, natural flowers and basic starter buildings like Resident Services and the Airport are always present. What differs is placement - these buildings and resources will appear in different places.

Resident Services and the area that will eventually develop into your town square is marked on the map with the Animal Crossing leaf symbol, and the airport will be on the grey, rocky area directly below it, or near enough to it. Rivers will follow different routes and raised areas of land will be in different places, however. For what it's worth, we picked the island layout in the very bottom right of the image above. That doesn't mean it's necessarily the best one for you, however.

Which is the Best Island Layout?

Okay, so, here comes the kicker, the thing that in your heart of hearts you probably know is coming: in Animal Crossing New Horizons there is no 'best' island layout that you absolutely must choose. In fact, pretty much every island is equal. This isn't a cop-out; let us explain.

As we say above, every island layout has the same basic setup. So that means initially you'll have access to a chunk of the island that features the town square and resident services tent, the airport, a good amount of beach, a bunch of trees and some rocks. This means you'll have everything you need to gather resources to do some crafting. Pretty quickly you'll craft a means to cross over the rivers to unlock another chunk of the island which will give you access to more of the same. Then, later, you'll unlock the means to create a ladder to clamber the inclines.

This is a new sort of 'gated' progression to the earliest stages of Animal Crossing New Horizons, but each island layout has access to the same basic things at each stage, meaning - we reiterate - that there is no 'best' island style. Don't worry about things like the location of rocks, as every few days rocks will shatter under your shovel or axe, at which point a new one will spawn in a new location the next day.

Every island type has everything you need at every stage of the game. We recommend you pick a layout you like and not worry too much about min/maxing your island choice. 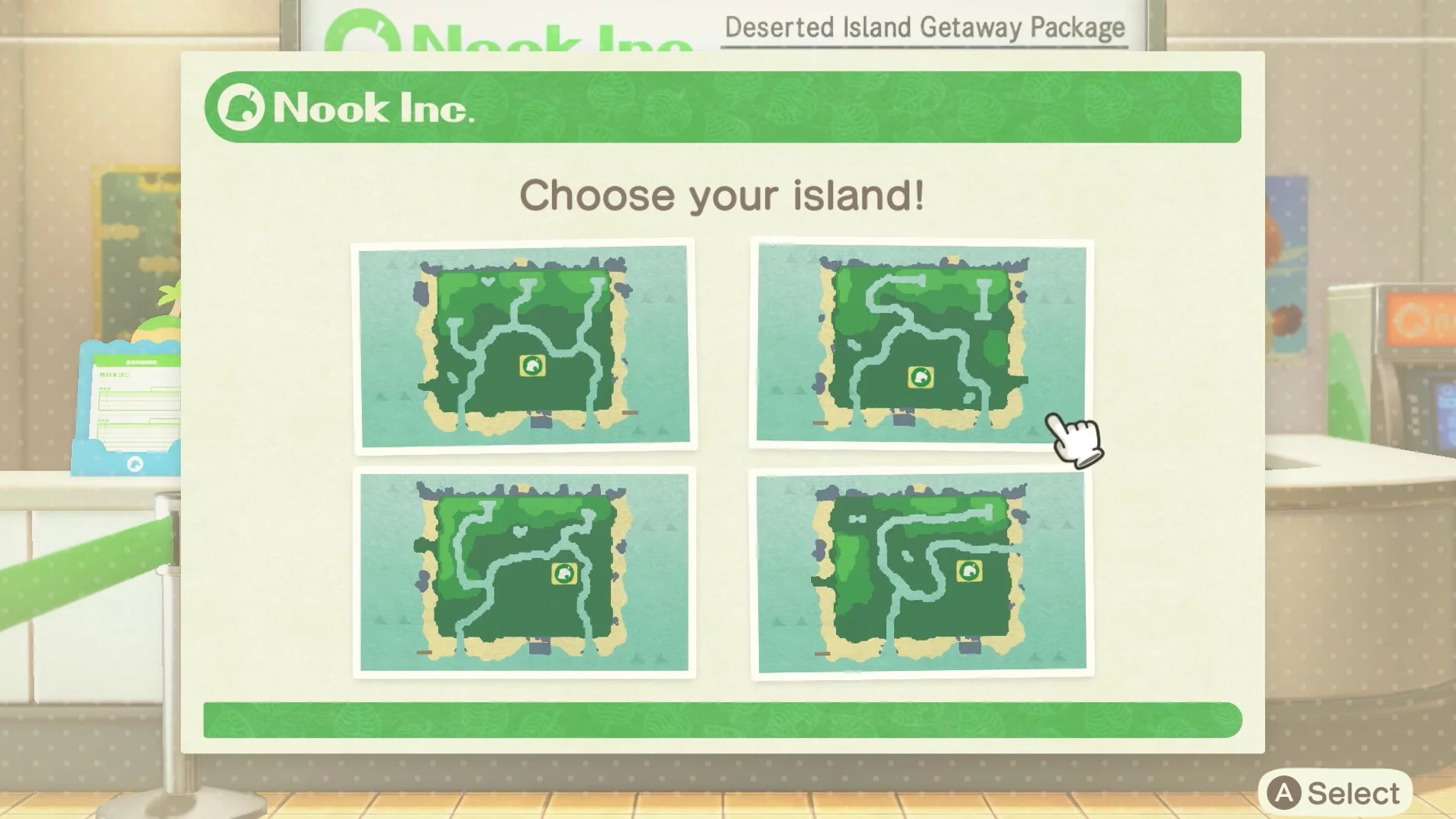 Things to consider when choosing an island shape

Okay, so - you understand the above disclaimers. But you still aren't sure what to do with your first island pick. That's okay! Here's what to think about first and foremost.

The main thing you should worry about is the location of Resident Services and the airport; make sure the layout has them in a position where you'll be comfortable with their location in relation to where you might place your tent, which will later become the plot of your house. That's different for everyone - some might want resident services as close to the middle of the island as possible. Others may want it out of the way. Just be aware that it'll become the central hub of your island life once it becomes more bustling and busy.

Next, consider the river placement when compared to your long term plans. If you want the vast majority of your island's buildings on one landmass rather than several, you'll probably want an island design where the rivers are less intrusive. Others might welcome the ability to break their island up, especially as you can eventually build bridges and reshape rivers - so, again, it's a personal choice.

The good news is that almost everything that you manually place - houses, shops, items and so on - can be moved later on, albeit as a cost. So if you make a mistake or your priorities change, you can rejig. Simple. Similarly, you can also change ledges and rivers when you unlock terraforming tools later on. The bad news is you cannot change the name of your island and it is strictly one island per Nintendo Switch, even if more than one player is playing the game. You'll share that one island - so choose carefully.

Things that won't be impacted by your island choice, but will differ anyway

There are some elements of your island that are random. If you care about them, you can re-roll - by which we mean, you can start over and delete your save to have another shot at what you want. This will take time, however.

The type of fruit that appears on your island is random, for instance, and there will only ever be one kind at the start. That can be remedied by spending Nook Miles to get a plane ticket to visit a randomly-generated island. Get foreign fruit from there, then plant it locally to implant another type of fruit. This is well worth doing, as selling foreign fruit is an easy way to make a lot of money quickly in New Horizons, so invest in upping your inventory space early. You can also coordinate with friends and visit their islands to nab some fruit samples to transplant and swap that way.

Similarly, your island adventure will begin with two animals joining you with tents of their own. Who this is will be random and unique to you, but later in the game, you will have an opportunity to recruit other new animals to the island via elements like the campsite and tapping amiibo.