Alan Wake developer Remedy has dipped its toe in the teaser pool and has dropped a hint that something is coming in 2013. Speculate for yourself after the cut. 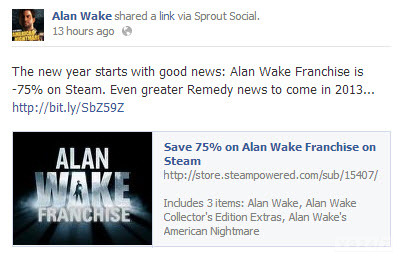 Note that the tease comes along with a promotion for Alan Wake Franchise on Steam. Remedy's Facebook post follows the studio registering a web domain for Alan Wake 2 back in July, suggesting that the author is due for a comeback at some point soon.

As the original game was initially an Xbox 360 exclusive, the rumour mill is suggesting that Alan Wake 2 will be an Xbox 720 exclusive, which while plausible, is highly speculative, although an E3 2013 reveal at the usual Microsoft pre-show conference could be a good shout.

We'll open the floor to you now gamers. What do you think? Let us know below.