Death Stranding has quite a robust photo mode and someone has completely taken advantage of it by getting this absurd shot of a cryptobiote.


When Sam first encounters Fragile at the beginning of Death Stranding, she pulls out a cryptobiote and chows down. I didn’t think about it much – it’s a strange, floaty bug/land-based marine-looking animal thing, and this is the world of Death Stranding, where nothing really makes sense anyway.

So I thought, sure, why wonder what on earth is going on with cryptobiotes when they’re not even close to being the weirdest thing in Death Stranding. But now I’ve changed my mind, all thanks to somebody who posted their up-close-and-personal photoshoot with a cryptobiote on Reddit.

Check out the photo below. 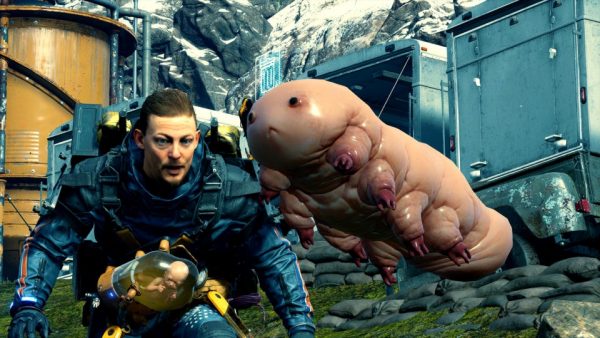 “Would you swallow that?” the post reads. I most certainly would not, I say to myself out loud, looking at this strange creature between rubbing my eyes to check if I’m hallucinating or if this is actually what a cryptobiote looks like. I think I want a pet cryptobiote now.

Honestly, how do you describe this thing. It has eight legs – or maybe it’s six legs and two arms? I’m not sure. It has a face resembling the visage of a newborn, sort of, which is unsurprising given Kojima’s fascination with babies in Death Stranding. I am incapable of deciding whether each leg, or arm, is equipped with fingers or toes.

Also how does it fly? Is there something in its body that is sufficiently buoyant as to defy gravity itself? Does it use some sort of aerial reverberation to bounce itself off of all surrounding physical structures – in this case, essentially propelling itself off of the ground by emanating a force in direct opposition to it?

If so, why do Sam and Fragile eat them? They should clearly rule the world if they are this advanced.

So no, Reddit poster, I would not eat a cryptobiote, a mini, pink tardigrade manatee hybrid that floats along the wayward winds of Death Stranding. And you shouldn’t either. Looking at this has made me confused, but it has also made me learn to appreciate these wonderful creatures. BB would not approve of you chomping on them just to restore a bit of health, or whatever.

In related news, Norman Reedus has no penis in Death Stranding. Also, apparently Hideo Kojima was once stung by “at least 10 bees all at once.” Maybe that’s why he designed these lovely cryptobiotes instead, who don’t have pointy stingers, and are just really friendly and cute.