Fun fact: turns out the front wheel of a Cessna 172 small aircraft is a little bit like those on a shopping cart, prone to swivelling one direction or another of its own accord based on the propulsion behind it, veering the whole thing off course if not properly guided. Not knowing this – or how to correct for it – when thrown into one of the most advanced flight sims in years is a solid way to totally flub take-off and crash into a hangar. Thankfully, the upcoming reboot to Microsoft Flight Simulator makes it easy to learn from your mistakes, providing a surprisingly accurate feel for flying real planes.

It might not seem the case these days but Flight Simulator is integral to Microsoft’s success. The software – crucially, never really a game – dates back to 1982, was once used as the compatibility benchmark for early PCs, pre-dates Windows as an operating system, and has been a perennial top-seller across the last four decades. Yet despite being borderline synonymous with Microsoft, Flight Sim has been absent for the last seven years, ever since 2012’s Microsoft Flight crashed and burned, ultimately discontinued a mere 10 months after take-off.

It’s perhaps because of that failure that news of Microsoft’s return to the skies with a revamped Flight Simulator was relegated to a low-key cinematic trailer practically buried in the middle of the Xbox conference at this year’s E3. Given how technical and distinctly non-gamelike the series has traditionally been, one of the world’s biggest gaming shows was an unusual venue to make the reveal, despite the blurring of the lines between console and PC gaming thanks to Xbox Game Pass now stretching the platforms.

For fans of the series, one flashy trailer was their lot though – some dazzling locations on display, a few buzzy slogans proclaiming its 4K credentials and Azure AI integration, and a vague 2020 release date for both PC and Xbox One. Since E3, the publisher has remained tight-lipped on the revamp, bar announcing details on its upcoming Insider Program. It hadn’t even confirmed which studio was developing the resurgent Flight Sim – until now.

At a preview event held in Seattle, Microsoft revealed that Asobo Studio is the team behind the new Flight Simulator. The French developer is most recently responsible for the excellent A Plague Tale: Innocence but has long worked with Microsoft, with a handful of HoloLens concepts and several commercially released Kinect titles to its name. Wait, no, don’t let the “K word” put you off – from a lengthy hands on with the software, it’s shaping up to be something special.

Where previous entries have focused on making the aircraft themselves as realistic as possible, along with attendant systems such as authentic flight paths and air traffic control systems, the new Flight Simulator is more ambitious, aiming to be, effectively, a world simulator. The aeronautic systems are bolstered by satellite imagery powered by Bing that can recreate some cities – Asobo cites New York as one – down to within three centimetres of accuracy, while real-time, real-world weather systems promise the most accurate flying experience possible.

The near-unseen star of the show may be a new approach to atmospheric modelling though. The air and particle systems Asobo is implementing for Flight Simulator are incredibly detailed, an entire simulation system in its own right. Light sources such as the sun, moon, or city lights scatter through the aether appropriately, pollution levels and humidity affect refraction and overall visibility, and the atmosphere is layered as in the real world. Even the clouds you’ll see – or fly through – are volumetrically modelled, with 32 layers determining shape, density, and “fuzziness” for some of the most realistic skies yet seen. 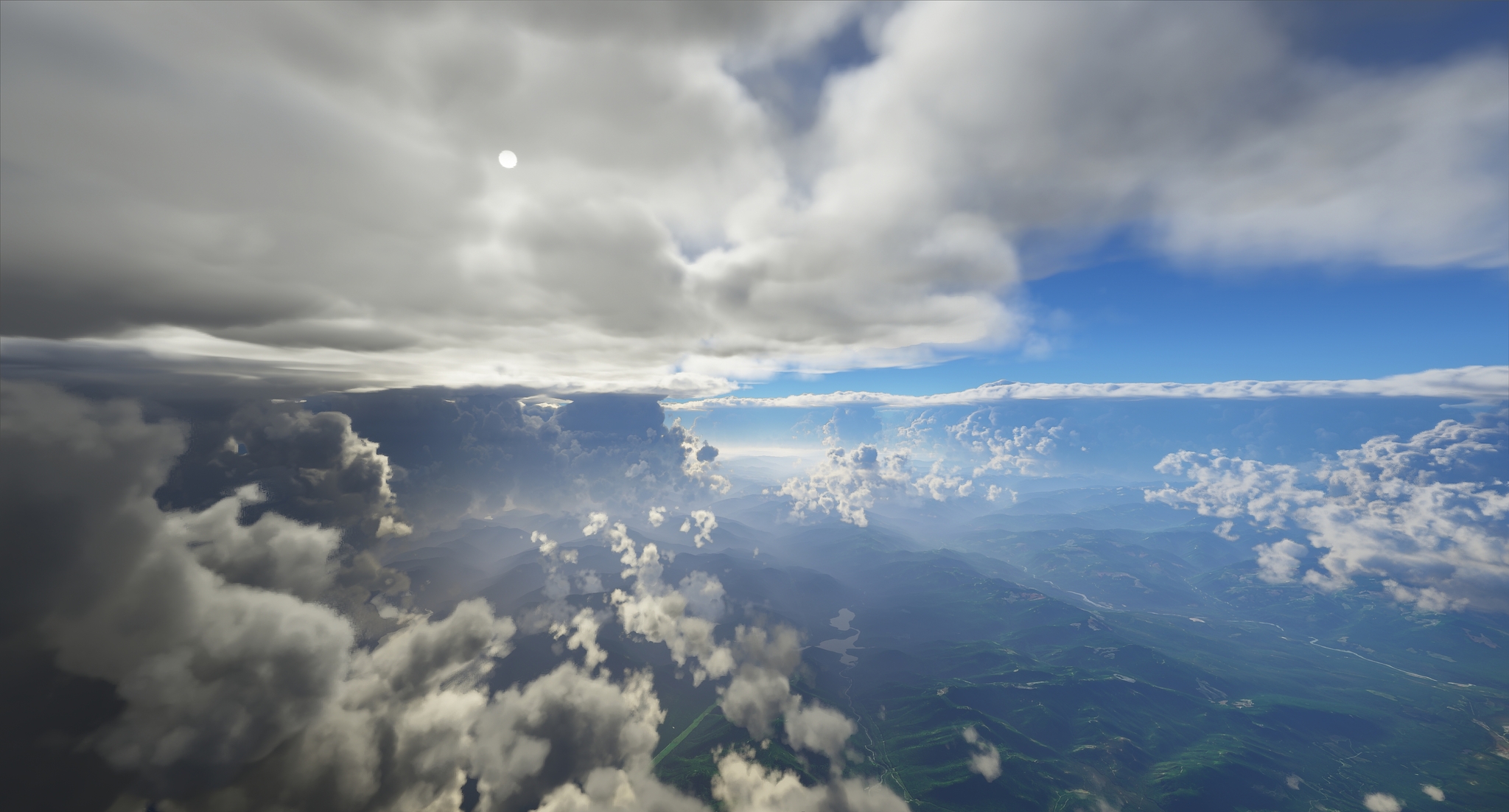 You can feel all of this at work when you’re flying, too. The pre-alpha build provided by Microsoft only had three planes to experiment with – a Cessna C172SP Skyhawk G1000, a Robin Aircraft DR400 Lycoming, and a Daher TBM930, all light or small craft but each with their own nuanced controls and physics – but they all responded well to the invisible forces. Fly over a valley and you’ll feel the change in pressure, enter a wind funnel and you’ll have to counter the turbulence accordingly, emerge from a rain front and you’ll immediately clock the calmness – and probably be greeted by a rainbow that forms naturally as light passes through droplets and vapour.

There’s phenomenal detail in the modelling of each cockpit too. The physical instruments of the build’s planes were faithfully recreated from their physical counterparts – or certainly the Cessna’s were, as an opportunity to experience the real thing was provided – adding an almost tactile sense of immersion. Asobo claims touch screen devices in more modern vessels will be simulated and interactive, though none were included at time of testing. Asobo has worked with aircraft manufacturers, including having access to CAD files and industrial reference materials, to virtualise every rivet, vent, and texture of Flight Simulator’s planes, inside and out. This extends to subtle environmental details, such as scratches and marks on the windshield, and spatial audio so everything you hear from inside the cockpit sounds as it would in reality – the rattling of a thin sheet of glass, the only thing separating you from a fall of thousands of metres, is alarming.

Currently, there’s no free-look if controlling with the thumbstick on a flight yoke though, just a series of slightly jarring 90° turns. Hopefully this will be corrected by the time of the final release. For anyone less interested in a wholly accurate cockpit view, it is possible to fly planes with an exterior view, at which point key dials and gauges – airspeed, radar, altimeter, and so forth – become part of an on-screen HUD. Not the most realistic, but Flight Simulator also seems to be targeting a newer breed of players, who maybe just want to fly around and tour the world – this view seems to be made for them. 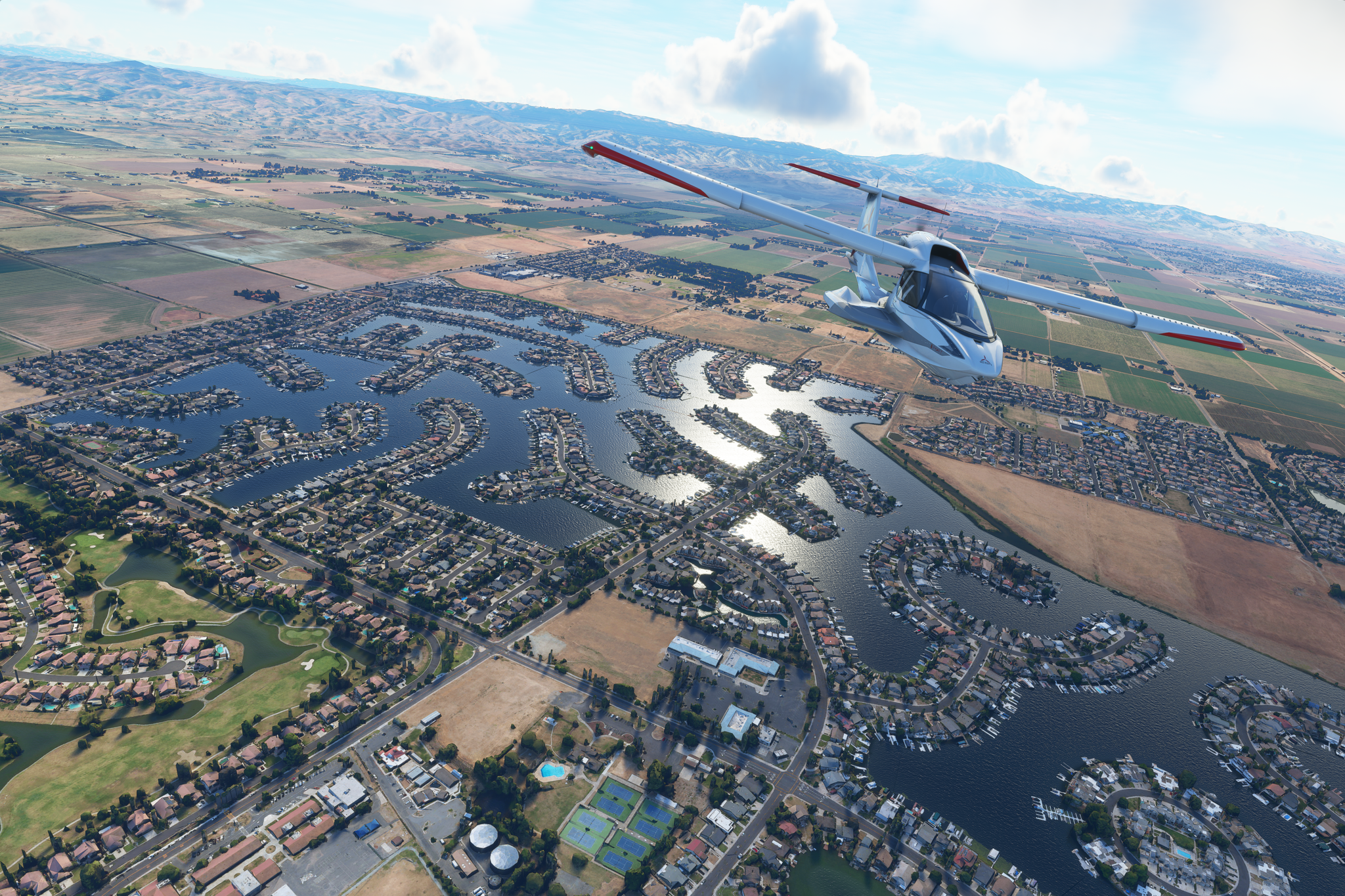 One of the main goals for the new Flight Simulator is to create a fully navigable world, using Visual Flight Rules (VFR). This means, per the General Operating and Flight Rules of the Federal Aviation Authority, that when the weather conditions are clear enough, the pilot “must be able to operate the aircraft with visual reference to the ground, and by visually avoiding obstructions and other aircraft”. That’s where the more ambitious features such as 4K visuals and satellite imagery come in – but at the moment, these are only appreciable in controlled conditions.

As this hands-on was based off an extremely early build, the aforementioned surface mapping and photorealistic landscapes are restricted to only a few select cities that have been properly modelled into the software. Seattle was one such location, with planes taking off from the Rainier Flight Services runway, zooming over Lake Washington, and able to navigate the Emerald City by sight alone.

Zoom across the Pacific and try flying around, say, Tokyo or Seoul though, and everything’s a lot ropier – there’s no iconic Tokyo Tower or Gyeongbokgung Palace to zip past, and even general environments and architecture are a lot more basic. Closer to home in the UK, major cities such as Birmingham or London will have certain landmarks in place already, but the rest of the geography will be wrong, even if the houses lining the streets look broadly accurate. This, it turns out, is down to one of the ways Asobo and Microsoft will be fleshing out the world.

“There are lots of what we call ‘cultural biomes’, which are not ready,” explained David Dedeine, creative director at Asobo Studio. “In North America, it’s much more complete, we have a much wider variety of types of building architectures to cover all the different archetypes we know exist. That said, there are also areas where the data can be improved – it’s already happened during development, several areas in the world have already been updated by Bing. Some areas will be photogrammetry based and we will certainly benefit from that.” 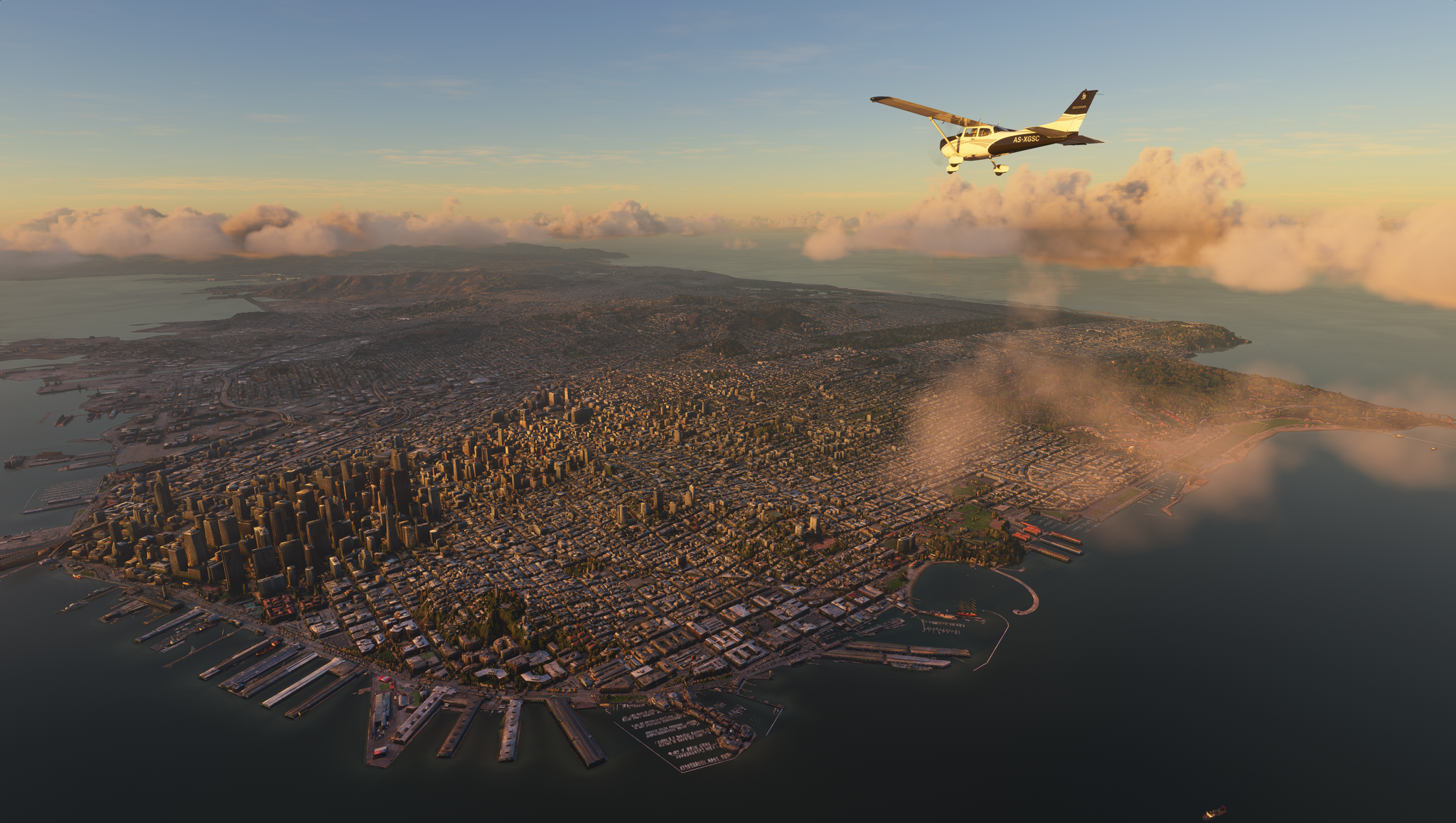 It’s something we expect to see improve as Flight Simulator edges closer to release, and integrates more real-world data. Already, it draws on two petabytes of information – part of the reason it’s designed as an always online title – and as it grows and becomes more accurate wherever you fly, that volume will only grow. Already though, it’s possible to start a flight from hundreds of airports, landing strips, and even landmarks around the world – choose the latter and, currently, you’ll start off in the air, without having to bother taking off – but most areas won’t have the detail of Seattle. Anyone signing up to the impending alpha should temper their expectations based on the trailer, for now.

While Flight Simulator will largely be a cloud-based title – Microsoft, wisely, presuming most people don’t have two petabytes plus of local storage – there will be some offline functionality. It’s just not clear yet precisely what or how much. A couple of clues can be found in existing settings – you can, at any point during free flight, change the time of day or weather conditions, removing your flight from the real-time, Azure AI-powered systems. That would remove a lot of the information and connectivity demands of the live software, and it’s conceivable that budding pilots could have a specific flight path and aeroplane to navigate when offline.

This is going to be an evolving platform though – and the hint is in the name. This is Microsoft Flight Simulator, not an iterative ‘Flight Sim 2020’. Given its always connected nature, this will be a perpetual title, updated on the fly, allowing Asobo and Microsoft to keep its fleet of jets, physical systems, and locations constantly up-to-date. 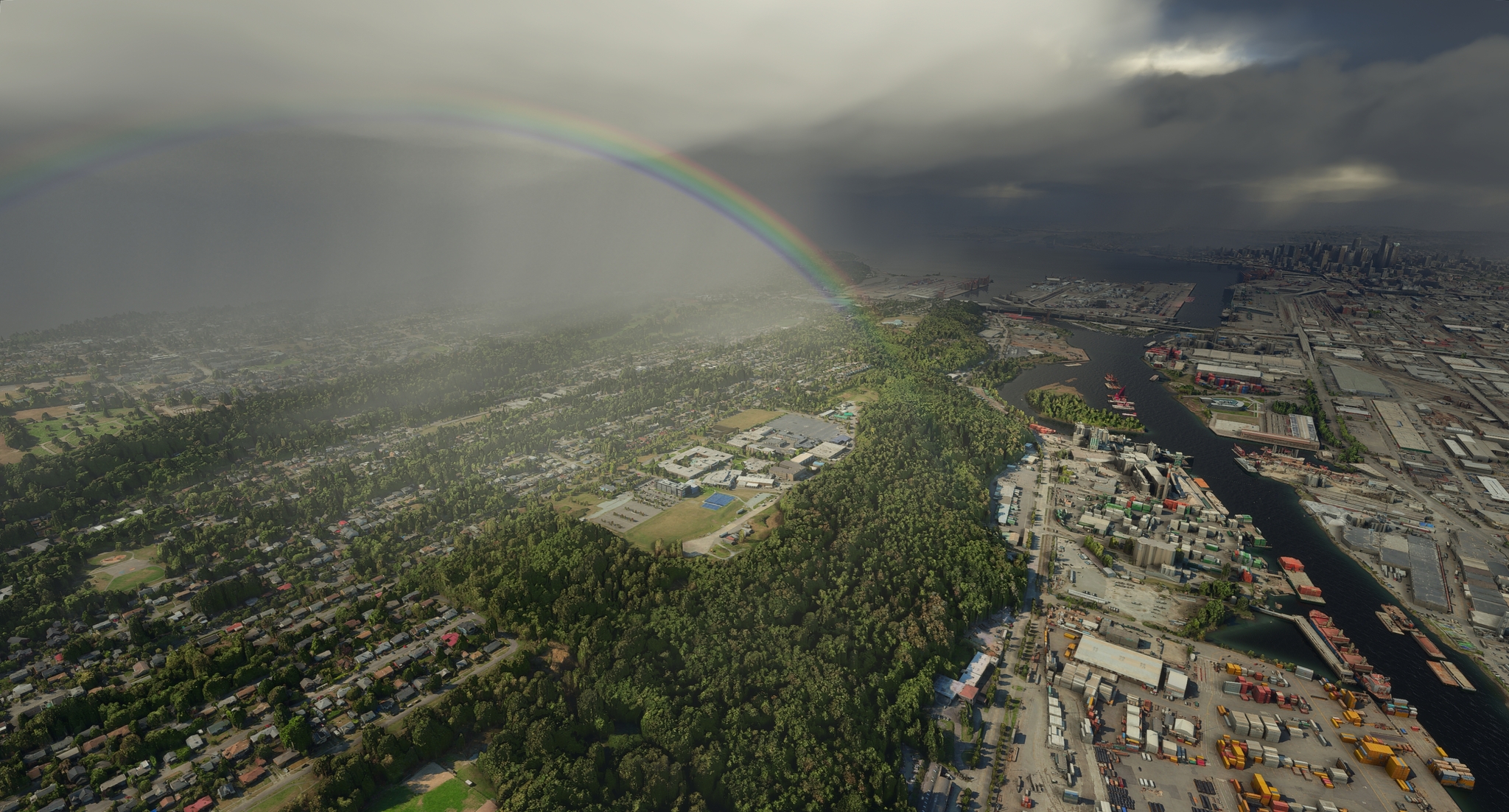 It’s a mystery at this point though how this will all translate to console. While having a PC and Xbox release is de rigueur for almost all Microsoft-published titles nowadays, it’s hard to see how Flight Simulator will possibly work on Xbox. While the Xbox One controller, mathematically, has over 150 button-press combos and could be mapped to most cockpit functions, that’s both ridiculously unwieldy and very far from authentically presenting flight controls. Even playing with mouse-and-keyboard on PC feels fiddly compared to a fully-decked flight rig, so making it controller-compatible could be a major obstacle.

There’s also the matter of who a console release is for – could Asobo “gameify” Flight Simulator to lure in more traditional gamers, then shift them to the open-ended experience of flight for flight’s sake? We’ll find out properly when Microsoft Flight Simulator comes to PC first next year, with the Xbox version to follow “later”, according to Asobo. Make your own conclusions as to whether that means console owners will be taking off on Xbox One or be held in the departure lounge until the next Xbox, currently codenamed Project Scarlett, launches around holiday 2020.

While there’s a risk Asobo and Microsoft are overreaching with Flight Simulator, particularly when it comes to its planned networking, AI, and real-time systems, the elements that are fully optimised are already incredibly impressive. If everything knits together over the next year or so of development, Flight Simulator aficionados should settle in for a very comfortable ride.