There are only a few weeks left to wait before Shadowkeep drops and the latest ViDoc from Bungie reveals more of what we can expect in the coming months.

With changes to armor mods, a new location on the Moon and the return of Eris Morn, you’d be right in thinking there’s already a lot to sink your teeth into in Shadowkeep.

In the latest ViDoc, Bungie employees discussed the “five-year vision” for Destiny 2, with Year 3 looking to be the most exciting in Destiny’s history.

The aim is to “build something that lives” and have players work towards personal and community goals while exploring new worlds and, of course, grinding for better gear.

The Moon has undergone a wealth of changes and its up to you to discover why. Nightmares from past battles will manifest and become “real” again, giving players familiar yet more challenging foes to face.

We also got a look at the new Nightfall menu, which showed the increasingly difficult Nightfall: The Ordeal Strikes.

There are four difficulty levels for these Strikes and require a base Power level of 750, and the more difficult tier you chose, the more modifiers will be added to the Strike.

We already know about some modifiers like Chaff, which disables your radar and Match Game, which requires you to use energy weapons that match the elemental type of an enemy’s shield. 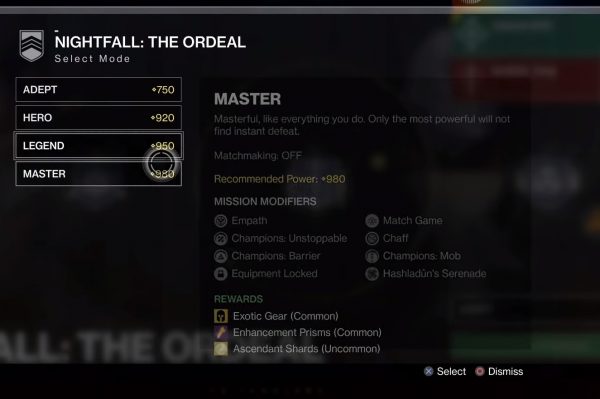 We also got a look at a new enemy type, Champions, which have their own modifiers and are incredibly tough to beat. As you power up your Seasonal Artifact, it’ll be easier to defeat these Champions and complete The Ordeal Strikes.

Time-travel was also briefly hinted at, and we got a quick look at the Lectern of Enchantment, which is linked to the Nightmare Hunt activities. The Dungeon in Shadowkeep will be deep within the Moon, and it’ll be filled with traps and pose a similar difficulty level to Raids for teams of three.

Destiny maps for the Crucible were also shown, including Fragment, Widow’s Court and Twilight Gap, and Elimination will also be added to Crucible Labs. There are four different iterations that rotate each week across all the new maps and players are encouraged to give feedback.

A roadmap for Season of the Undying was posted recently, which shows all the upcoming content, including Exotic weapon quests called Leviathan’s Breath and Xenophage. 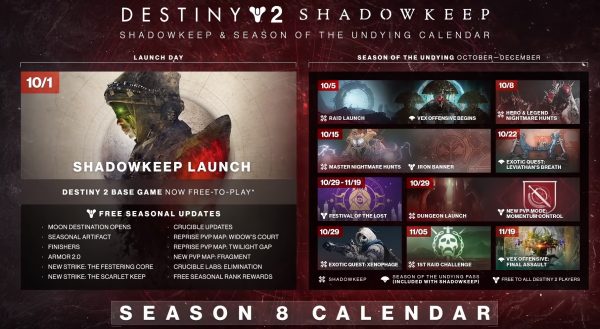