Patrick Garratt couldn't play Ninja Gaiden 3 and DmC: Devil May Cry made his hands hurt, but he turned down the difficulty before throwing in the towel on twitch gaming for good.

The dead screen followed endless rocket-pounding. I was undone. Am I really beyond mainstream action gaming?

I’m going to be 40 this year, and my taste in games is changing. Content made for younger people is becoming difficult to consume. I first became aware of this with Borderlands 2. Being shouted at by a robot every 12 seconds was irritating at first, but the straight “shooting” bit eventually kept me playing for over 30 hours. It was there, though. I was annoyed. The game is childish, and I’m not a child. I wouldn’t read Twilight or watch the latest Disney release, so why am I playing games in which I’m being harassed by a cartoon goblin? Que sera, I guess. It’s my job. What I didn’t expect from getting older was to become physically unable to actually play a game meant for young adults.

I tried Ninja Gaiden 3: Razor's Edge on Wii U last week and found myself facing a crisis. I couldn’t do it. I couldn’t get off the first stage. I was prepared for the content to be young, but I didn’t expect to get stuck in the first few minutes of play. My 39 year-old fingers had deserted me. The dead screen followed endless rocket-pounding. I was undone. Am I really beyond mainstream action gaming? Am I too old for the games business in general?

DmC came out last week, and I’ve been following it closely enough. Every time I’ve seen it I’ve been impressed, but the demo hurt my hands. Some suck-cheeked androgyne ODing on mushrooms is one thing, but coming to a point where you’re saying, “I can’t play this,” is another. Ninja Gaiden 3 appeared to confirm it. Hack-n-slash was for ten years ago. I decided I wouldn’t buy DmC. Most of my gaming time post-Far Cry has been with Civ V, and that suited me fine. Ponderous clicking for grown ups. No more kids’ games, I said to myself.

Fortunately, before I wrote this piece I decided to make sure. I went back to Ninja Gaiden and turned the difficulty down. It was like playing a different game. I was scooting round enemies, levelling skills, blasting through stages and feeling all empowered at turning the screen into a teenage abattoir. I had a great time. Ninja Gaiden 3 is a titanically stupid video game in which Ryu (“It means dragon.”) chops thousands of people to pieces with bladed feet to a feverish fuck you blur. It’s one giant fuck you. There’s a mad scientist with a beanie, a shy kid called Connor and some idiot in an opera mask prancing around on desert skyscrapers for no good reason I could fathom. Ryu’s arm becomes infused with his sword, turning bright red and sprouting enough veins to embarrass 4chan /d/. Ayane’s in it, which should speak volumes. It’s ridiculous. I loved it. The play itself is a lot of fun. 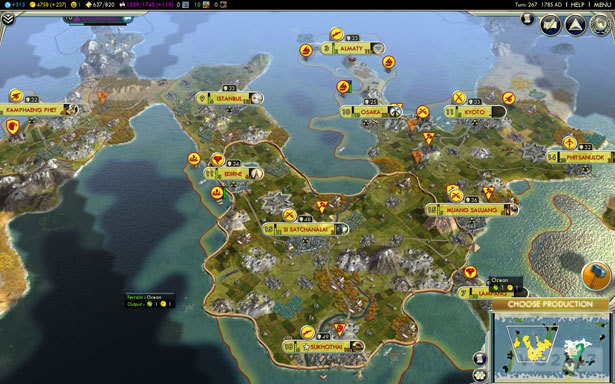 What I enjoyed most about it, I think, was that my hands weren’t creaking too badly to access the content. Game-makers are obviously aware that some of this stuff really is too hard for bands outside of the ultra-core. Capcom talked about the increased accessibility of DmC in the run-up to launch, comments I brushed over previously but am now pleased to note. I went from moping about not buying DmC one day to gleefully handing over cash the next. Now I know it’s going to be fun.

So. I’m not too old for the fuck yous. Neither are you. You may have to turn everything down a bit as the years drag on, but that’s life. Swallow that ego, granddad. The cartoon nonsense isn't over quite yet.

Disclosure: A promo copy of Ninja Gaiden 3: Razor's Edge was used in the writing of this piece.