Alex Donaldson wasn't the first man in the UK to buy a Vita, but he did talk to him. Get all the buzz and photos of the high street launch without the queueing and the cold.

Games priced at around £40, although some downloadable titles are significantly cheaper.

“No sleep,” Zohaib Ali, a 21-year-old student from Uxbridge enthuses as he waits outside in the biting February cold, bouncing on his toes. “I’ve stayed awake all last night – I’ve been here since Sunday!”

He looks like he should be dead on his feet, but he isn’t – he’s got two massive things to look forward to that are making him incredibly excited. “Tonight I’m just going to play Vita all night,” he swears – and he’s doubly happy because Sony have kindly guaranteed him all first party games free for the rest of the year – not a bad deal for waiting in the cold for a bit.

“I’ve already played it – it’s good, it’s really good!” he continues, so excited that I barely need to ask anything. “I love games, I love technology – I just want my Vita!”

He’s just one of many waiting outside GAME Oxford Street, one of a handful of stores opening at midnight to celebrate the launch of Sony’s new handheld – and the air both inside and outside the store is one of excitement from company reps and gamers who can’t wait to get their hands on the machine. “Not long to go!” one man shouts down the queue, cheering up the others in the cold.

I, thankfully, got to go inside to speak to some of the folks behind the launch.

Almost as excited as Zohaib was Michael Denny, the Senior Vice President of Sony Computer Entertainment Worldwide Studios Europe – quite the title. “Personally I think in terms of launches it’s possibly the strongest launch line-up we’ve had.”

“Not just in terms of quantity – we have announced 50 titles which is fantastic in itself – but in terms of quality and the mix of the big franchises that have almost been reinvented for Vita mixed with innovative, new, exciting IPs as well. I think we’ve really something for everybody – it’s really strong, really exciting.”

Something for everybody is part of Vita’s big marketing push, including ‘Vita Rooms,’ a store space that allows the public to go hands-on with the device from hardcore offerings like Uncharted to as-yet unreleased titles like LittleBigPlanet – and folks who’d picked up their Vita could head to the space for a drink and relax after midnight if they fancied.

Everyone isn’t the core demographic for Vita at launch, though, as Denny was keen to explain.

"The PlayStation DNA at its core is that we’re all about games. PlayStation Vita has games at its heart – people that love games will want a PlayStation Vita. We are going for a core demographic at launch and we have the games to appeal to them.”

“The PlayStation DNA at its core is that we’re all about games,” he told me “PlayStation Vita has games at its heart – people that love games will want a PlayStation Vita. We are going for a core demographic at launch and we have the games to appeal to them.”

“There’s no question for me that if you love the experience of Uncharted on your TV you’ll absolutely love it on your portable as well.”

That’s something with which SCEE PR Manager Hugo Bustillos was also keen to point out. “We’re offering your triple-A games, your home console experiences – Uncharted, WipEout,” he said. “We’re essentially giving you a PlayStation 3 in your pocket.”

“The third parties have done an amazing job too; I think FIFA’s incredible – I’ve been playing that a lot – Marvel vs. Capcom looks stunning, and I think for the first time is a way to play an actual beat-em-up on a portable console and it’s very similar to what you get at home.”

Beyond that there’s also a plan for Vita’s portfolio to expand past the hardcore with roots in the machine that stretch down channels that lead to social experiences and casual games. Boasting features like downloadable social media apps and a better ability to handle bite-sized downloadable games, there’s a hope that at launch and beyond more casual gamers will find something in the Vita.

“Titles like Escape Plan, Reality Fighters, Motorstorm RC help us to appeal to a broader range of people even if we are hardcore-focused at launch,” Bustillos explained.

Denny went deeper on that, elaborating in a basic way on the company’s intentions for the future. “Vita is a very connected device, a very socially connected device. With its multiple interfaces such as front and rear touch, there’s no question that we can expand that market to be broader.”

“What we’ve seen with the proliferation of gaming on the go as it were with more casual devices is that alongside our core games we believe we can ‘graduate’ or ‘upgrade’ some of the more casual users that have entered the gaming market up to PlayStation Vita.”

“You look at the catalogue we have and there are some titles that are broader-based that can appeal to more casual gamers even at launch. There’s lots of unannounced games to come, and we’re happy with the launch line up in terms of how broad it is, but yes, we’ll be adding to that catalogue and I’m sure the demographic will be broadening very quickly.” 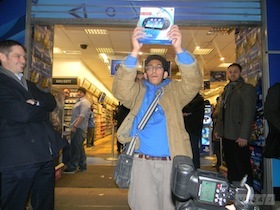 21 year old Zohaib Ali queued for hours
to be the first to own a Vita.

Even with Ubisoft and Tecmo Koei titles absent from the store due to GAME’s recent money woes the Vita launch line-up was still notably plentiful in the store, with customers rushing in on a first-come-first-served basis to grab limited items like cases and memory cards.

Everyone who bought a Vita left with a bag replete with Vita swag including items like a t-shirt, LittleBigPlanet mug and Nathan Drake Sackboy, whilst members of the WipEout 2048 development team were on hand to sign copies of the game and the Vita to give midnight buyers a collectable edge.

I grabbed GAME Group Marketing Director Anna-Marie Mason to see how she felt the launch – vital for the struggling company – was proceeding. “We’re partners in this launch with Sony – we’ve been behind this product all the way,” she told me amidst the throngs of customers.

“This is an important launch for the industry, and we’ve got really healthy pre-orders and deposits for this product. Judging by tonight’s turn-out I think we’re set to have a really great week.”

“It’s not about less – it’s more about doing the right thing,” she clarified. “This is absolutely the right platform for Vita – we’ve also got our Gamestation store in New Street open this evening – it’s a brilliant store, and they’ll have a great turn-out just like we have here. We’re also opening our stores early tomorrow – from 8 o’clock – so we know customers will be in early and pick up their machines.”

All parties involved – Sony, GAME and the third parties – will obviously be hoping that Vita has a bumper launch. Past all the marketing speak and grandstanding the stand-out from last night was just how excited Zohaib, first in line, was. Based on his reaction it’s quite clear that - ignoring sales for a moment - Sony have done something very right.