The Evil Within may cast you as an investigator in a situation beyond his control, but does placing gamers in a tightly-scripted horror scenario work in these action-heavy times?. Phil Owen investigates.

”So begins a heavily scripted game of cat and mouse that is not unlike a movie character attempting to outmanoeuvre and outrun Leatherface or Jason Voorhies.”

The horror genre is dying, or so some folks would like to have you believe as big-name franchises like Dead Space and Resident Evil take a more action-oriented stance. But E3 gave horror fans some reason for hope with the indie title Outlast and the return of Resident Evil-creator Shinji Mikami with Bethesda's The Evil Within.

I had the chance to watch one of Mikami's team play a demo of The Evil Within behind closed doors at E3, and I found what I saw to be quite promising. Before the demonstration began, Mikami discussed how his team is “trying to create a terrifying game," and that they are looking to bring us back to the old days of survival horror. I took this as a “fuck you” to modern action horror.

But what matters is the gameplay, so let me tell you all about that. The player character is one detective Sebastian, and he and his partners are called to an asylum where there are dead people everywhere. By which I mean they are dead bodies lying on the ground, rather than zombies. Bodies, blood, general grossness. It's pretty cool, but not unexpected.

So Sebastian and his bro walk around surveying the carnage – literally walking, rather than the typical video game character jog – until they arrive in the security room. Sebastian looks at one of the camera monitors, and he sees a phantom-like dude pop in an out of frame very quickly. Sebastian then turns around and WHOA the phantom dude is right there and he's about to stab you [fade to black].

That was exciting, I thought, but while that first section was all about building dread, what followed was an exercise in tension. Sebastian is hanging upside down in a room full of strung-up corpses. In the next room he can see this gross mutant-looking dude - think The Hills Have Eyes - who is chainsawing somebody. Sebastian frees himself, and from there he has to sneak around because he doesn't have any weapons. 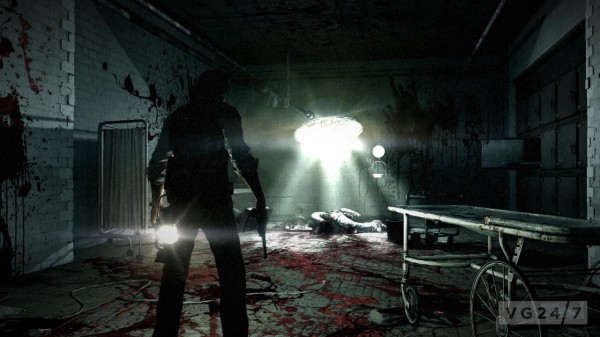 So begins a heavily scripted game of cat and mouse that is not unlike a movie character attempting to outmanoeuvre and outrun Leatherface or Jason Voorhies. You sneak, and when you have the attention of your hulking, chainsaw-wielding foes, you run like hell. At one point, in what I assume was a scripted moment, Sebastian took a chainsaw to his right calf, which left him limping. This served to ramp up the tension considerably, or at least that's what it felt like as an observer instead of a player.

The problem with modern action horror is that those games make you powerful. You might be surprised when a necromorph pops out of a vent, and you might even be scared when you're facing what feels like a few too many zombies at once. But in those games you have to physical tools to overcome the situation. That's why something like the regenerating monsters in Dead Space stand out in those games; you can shoot those damn things all you want, but they will keep coming.

”What Mikami appears to be doing with The Evil Within is something that horror gaming sorely needs: more scripting.”

The early level takes on the structure of a horror movie, in that you are not powerful at all. Direct confrontation will get you killed, and that's wonderful.

The highly scripted nature of this section might lessen its replay value, but I really like the idea of a heavily curated horror experience like this. It's novel, but also effective. When done right, participating in a horror movie scenario in a game will be far more effective than watching such a scenario in a non-interactive film.

After this section, which served as The Evil Within's prologue, was done, the demo moved onto a section later in the game that seemed at first to be a more typical example of horror gaming. You're in a house, and zombies are approaching, and Sebastian shoots a few of them and sets some traps by the windows that blow up when the zombies crawl in.

There are too many of them to fight off, though, and Sebastian takes off down the stairs, where suddenly, the world changes around him. He's no longer in the house, but rather in some unknown location where things get weird quick. Eventually, a spider monster crawls out of the floor and attacks, and then the demo ended.

What Mikami appears to be doing with The Evil Within is something that horror gaming sorely needs: more scripting. Not every horror experience needs to be like this, but the idea that you could participate in an actual movie-type scenario is one that holds serious potential. In addition, stripping the player of his control over a situation is a pretty bold move for a AAA project like this. It's something that might irritate a lot of folks, but will thrill true horror fans.

This all assumes, of course, that what I was shown is indicative of the full experience, which it may not be. They may just be hiding the endless zombie battles from us at this stage. But I'll hold out hope, for now.