You can tell we've all been alone in lockdown for too long when the newest NPCs in The Sims 4 are an amorous spirit guide and a skeleton with an inexplicable cleavage.

Yes, The Sims 4 Paranormal Stuff Pack introduces a handful of new special characters, including the rakish Claude René Duplantier Guidry — or just Guidry for short — a very helpful ghost who just happens to be permanently stuck in the Flirty emotional state.

The pack also marks the long-awaited return to the franchise of fan-favourite Bonehilda — a skeletal maid whose assets this time around are causing a few raised eyebrows, not to mention scratched heads as we try to work out how a lady with no skin, fat, or indeed bodily tissues of any kind can fill out a dress like that.

Whether your lonely Sims are looking for WooHoo in all the wrong places or hoping to be taken seriously in the Paranormal Investigator career introduced in the pack — either way, they'll want to start summoning these new supernatural friends. Here's how to go about it.

How to perform a séance in The Sims 4: Paranormal

While some of the new special characters in The Sims 4: Paranormal will turn up of their own accord, if you want to summon one of them specifically, your Sims will need to perform a séance. There are two ways of doing this:

There are a number of different séance interactions for your Sims to perform, and who (or what) you end up summoning varies depending on the interactions you choose.

How to summon Guidry

Guidry is a friendly (maybe a little over-friendly) ghost who likes to hang around houses with the new haunted house residential lot type. While the exact timing isn't set in stone, Guidry will appear of his own accord sometime after 9pm on the second day after a household moves into a haunted house. 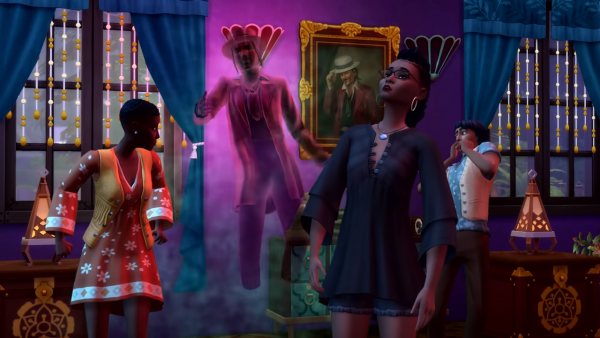 Affable and permanently flirtatious, Guidry offers to help your Sims navigate the world of the paranormal in exchange for letting him hang out and lightly haunt you from time to time.

Guidry functions as somewhere between a tutorial guy for the pack, and a tour guide like those you'd find in The Sims 4's vacation destinations. In addition to ordinary social interaction options, you'll notice that Guidry has a unique social sub-menu when you click on him called (wait for it) 'Guidry'.

Going into that menu will give your Sim access to a series of one-off queries about the supernatural, ranging from the generic (starting quite reasonably with 'Who are you?' and 'Why are you here?'), to specific requests relating to the Sim's current emotional state and any paranormal activity they might have recently witnessed. 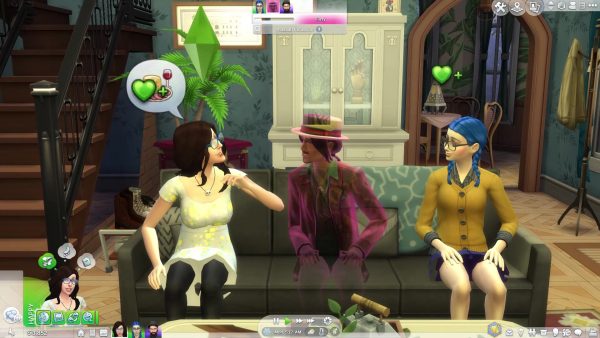 In addition to offering advice and guidance with regards to the paranormal, Guidry will helpfully go around clearing up any haunted objects that spawn on the lot — which can make him a very useful friend for Paranormal Investigators, as well as Sims who live in haunted houses.

If your Sims don't live on a haunted property but would still like to visit with Guidry, it's possible for Sims with the Paranormal Investigator License reward trait to summon him at any time using the séance table or séance circle. There's no lower limit on the Medium skill level required to do this. However, summoning Guidry this way doesn't seem to give you access to the special 'Guidry' social menu (though this close to release, that might be a bug) — but otherwise he'll still be his usual helpful and amorous self.

How to summon Bonehilda

Unlike previous versions of Bonehilda the skeleton maid, who were 'hired' by acquiring their coffins in Buy Mode, The Sims 4's take on the character needs to be summoned during a séance. 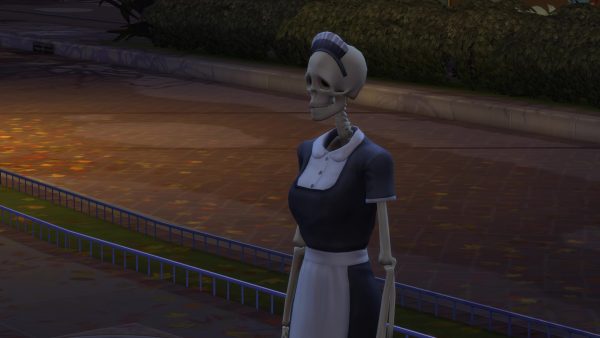 Your Sim will need to build their Medium skill to at least Level 3 and have access to a séance table (or séance circle) in order to summon Bonehilda. There doesn't seem to be any way of failing to summon her once your Sim has the power to do so — which probably shouldn't be surprising: she's supernaturally motivated to provide free maid services for all eternity, so answering when you call presumably isn't much of a stretch for her.

Once summoned, Bonehilda will appear at the séance. For the most part she behaves much like any service NPC, shuttling around performing household tasks such as cleaning and repairs as long as there's anything that needs doing. Some of her behaviours come with a spooky twist, of course.

And, because I know some of you were wondering — for the first time in the series, you can WooHoo with Bonehilda. It looks to actually be a feature this time, not an exploit like it was in The Sims 3. I'll leave you to wrestle with the various ethical implications of this one.

Bonehilda will stick around while there's work to be done, then hang around for a couple of in-game hours afterwards to give you more time to socialise with her. After that, she'll quietly returning to… wherever it is she came from. She'll also despawn immediately if you travel to a different lot.

There's no cooldown on summoning her back, however, so as long as you have a Sim with Level 3 or higher Medium skill and access to séance equipment on the lot, she can be with you more or less 24/7.

Sims in the Paranormal Investigator freelance career can summon Bonehilda for assistance during gigs. This can be tricky to do in time, but has some significant payoffs: it turns out that among her many talents, Bonehilda is also a dab bony hand at fending off volatile ghosts during Expert Paranormal Investigations. 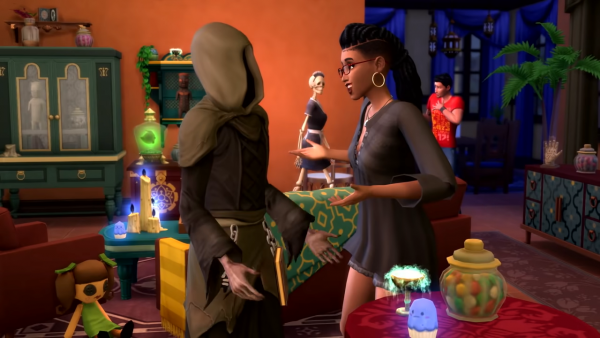 Alternatively, Sims have a small chance of turning themselves into Bonehilda while performing the 'Ghastly Ritual' séance interaction. The effects are only temporary (lasting around four in-game hours) and the game doesn't treat this as a failure of the ritual, rather a minor variation on the ghost powers Sims are meant to gain from it.

How to summon Temperance

The pack's third new special character, Temperance, works a little differently to the other two (even after you take into account the fact that in contrast to them, she's not been made out to be weirdly alluring).

Unlike Guidry and Bonehilda, Temperance absolutely does not have your Sims' best interests at heart. She's a sworn enemy of your good pal Guidry, with a permanent Angry emotional state to prove it, and her arrival signals trouble.

Not that you'd probably want to, but summoning Temperance isn't a simple matter of performing a séance and asking her nicely. Instead, there are a couple of circumstances under which Temperance shows up.

Moving a household into a haunted house residential lot will cause Temperance to spawn after a few in-game days at most, after which she'll commence making your Sims' lives a misery. Sims in the Paranormal Investigator freelance career have a chance of encountering her during an Expert Paranormal Investigation gig.

How to summon other ghosts and spectres

Finally, in addition to the three new special NPCs introduced in The Sims 4: Paranormal, there are two generic types of spooks that your Sims can summon.

Sims with Level 3 or higher Medium skill can perform the ritual Invoke the Dead using a séance table or séance circle.

If there are ghost Sims somewhere in your save file (including the handful of pre-made NPC ghosts from certain add-ons, as well as any Sims of yours that might have lingered after passing on), there's a high chance one of them will turn up when you perform the invocation.

Ghosts will be in a random emotional state when they arrive, so the haunting might be volatile or friendly — there's really no way of knowing. Once summoned, they'll hang around for a few in-game hours to socialise or cause trouble, depending on their whim, before departing more or less like any house guest.

If there are no ghosts available to pay you a visit, or occasionally if the RNG just feels like it, you might end up invoking a trio of spectres instead. Unlike ghosts of regular Sims, spectres are floating chibi balloons that don't bear much resemblance to humans — and are unique to the Paranormal pack. 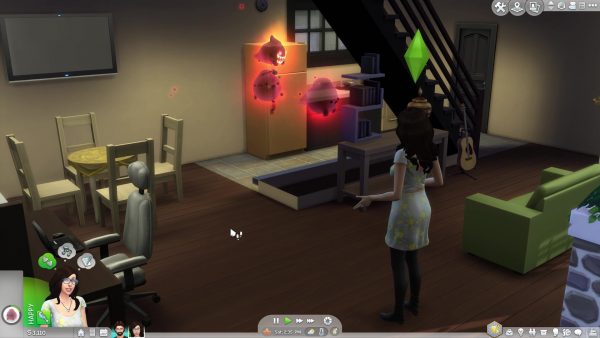 Despite their cute appearance, spectres can be moderately troublesome (though a ghost in the angry emotional state seems to be more destructive), so it's worth having some high-quality crafted items on hand to appease them with. Failing that, you can even try bartering a piece of your Sim's soul.

If your offering is accepted, the spectres will depart the lot. They'll even leave you a spooky reward for your generosity. This can actually be a good way of gaining paranormal reward items without completing Paranormal Investigator gigs, so it's worth considering trying to invoke a few spectres if you have something on-hand to trade.