If you're one of those people who obsess over minute details, like how game titles are stylised in your Steam library, we've got good news.

This extended to most entries in the series, which made it look awkward in everyone's Steam library. Capitalising some words and not others also contributed to this mess, but it's thankfully all been resolved. 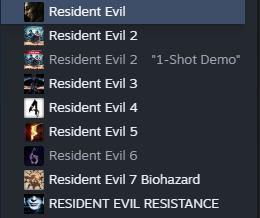 Reddit user Comboxer was the first to share the news, having spotted the new and improved style in their Steam library. All games, with the exception of Resistance, now use the English title and only the first letter of each word is capitalised.

Biohazard now only appears as a subtitle for Resident Evil 7, and it's not in all caps. The Steam directory still has a few rogue items, like Resident Evil 2's Deluxe Edition, but the overall result is a net positive.