If there’s one thing the vast, gorgeous landscapes of Red Dead Redemption 2 needed, it was a photo mode. With the release of Rockstar’s epic on PC this November 5, we’re finally getting a tool worthy of the world.

During a recent trip to Rockstar’s London office, I got a chance to play a few hours of the game on PC, in 4K, at 60fps, running on an 2080 Ti. It’s as beautiful as you would expect. Red Dead Redemption 2, even on console, is packed with granular details - on PC, they pop. Every detail - each pull in every piece of fabric, each spine on every cactus - has been cranked up like the handle on an antique gatling gun.

The first section I’m shown is the bar fight in Valentine, and it’s easy to see why. Rockstar wants me to notice how good the mud looks as it cakes Arthur Morgan during the scuffle, sticking to his back and hair in individual clumps. Rockstar wants me to see how much easier it is to spot the bruising and swelling that appears on characters’ faces with every bone-crunching punch. I do. I see it. I see it all. A mighty urge to get Arthur into a bath washes over me. 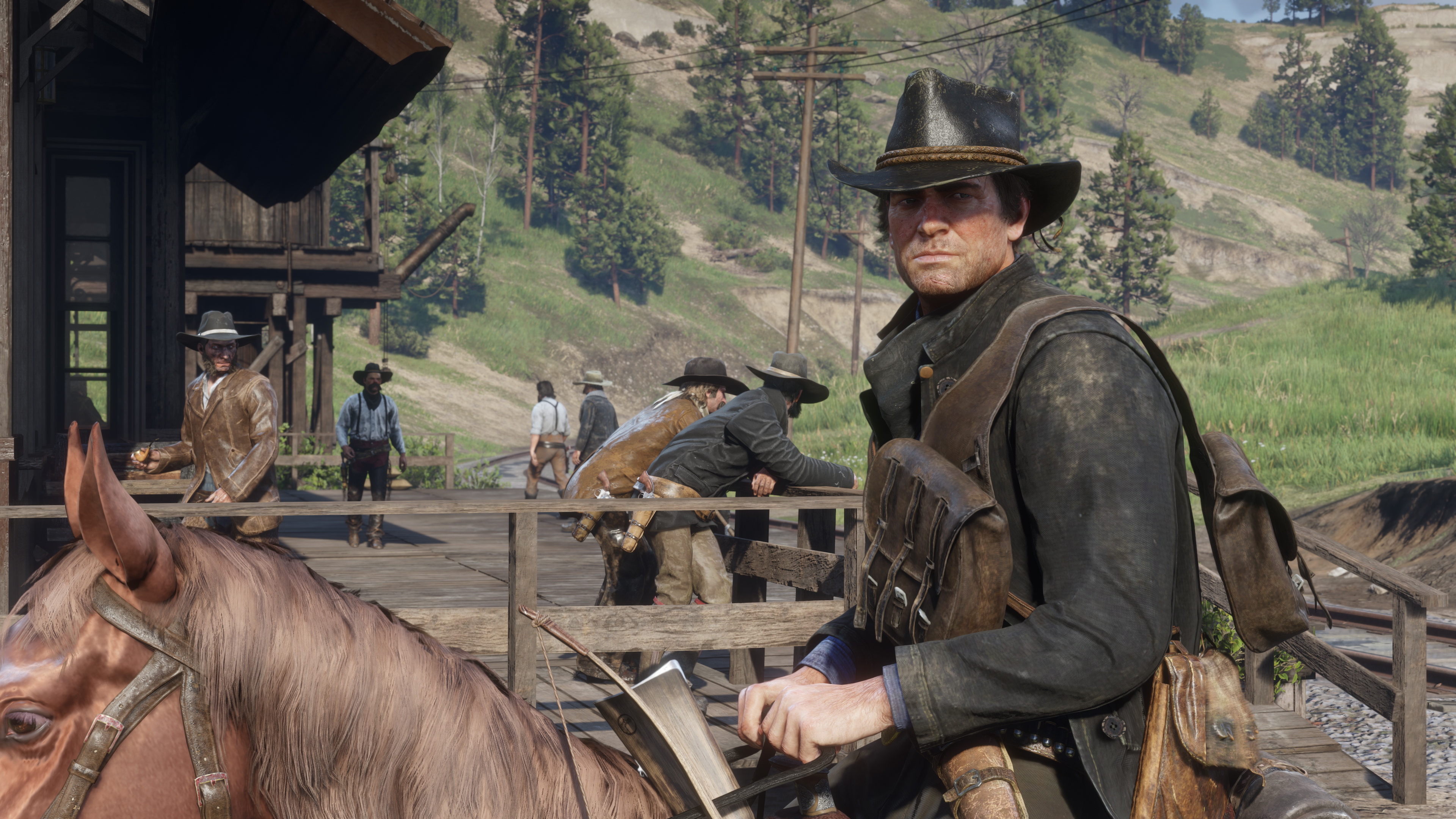 We don’t have time for a bath, though - I’m here for details, as many as I can fit in. So I head over to the next mission marker, the assault on the Braithwaite Manor. This firefight plays out at nighttime, highlighting the improved lighting and shadow system, which now casts longer and shorter shadows depending on the object’s distance to a light source.

Red Dead’s gunplay is purposely weighty and methodical, and you’re meant to pick your shots carefully. As cool as it is, Dead-Eye is essentially a crutch to make up for analogue stick aiming, allowing you to paint targets and take down multiple enemies simultaneously as game world slows to a crawl. Playing it at 60fps, it immediately feels more responsive, easier to pull those headshots off outside of Dead-Eye, even on a controller. Switch to mouse and keyboard, with its quick select menu for different guns and the more accurate aiming afforded by the mouse, and you feel like one of Westworld’s infallible killing machines - especially with the new semi automatic M1899 pistol.

In the aftermath of the fight, the gang firebombs the mansion and spot the real reason Rockstar brought me here: thousands of embers dancing through the night sky. As the light from the fire catches Dutch van der Linde’s shirt, it emits an orange glow, the translucent material catching the luminescence and holding it there in the fabric - a glimmer of that improved global illumination at play.

From there, I’m free to do what I want. So I do what any respectable cowboy would do and I head into the mountains to see how the snow crunches underfoot, to get a look at the tessellation and the enhanced textures in play. You know how satisfying it is in real life to hear the crunch of thick snow? It’s just as enjoyable here, the smoother frame rate making the act of tracing circles in the mush almost hypnotic.

Once I’m done definitely not drawing willies, I head up into the peaks to watch the world go by. The improved draw distance means you can pick out the details in the trees in the forest miles away, and dramatic shadows envelop the landscape as large clouds loom overhead. When the weather turns, individual raindrops are visible as they fall to the floor. I can’t wait to see how a storm looks, the flashes of lightning illuminating a lonely cactus in the plains of New Austin.

Since I still have some free time left, I ask to do a specific mission: Icarus and Friends. This takes you to the skies in a hot air balloon, breaking through the clouds and seeing the world from a one-off vantage point. Here you really can see those draw distance improvements, and it makes me wonder what a new Grand Theft Auto would look like using this tech. It’s also an excuse to have a play around with photo mode. 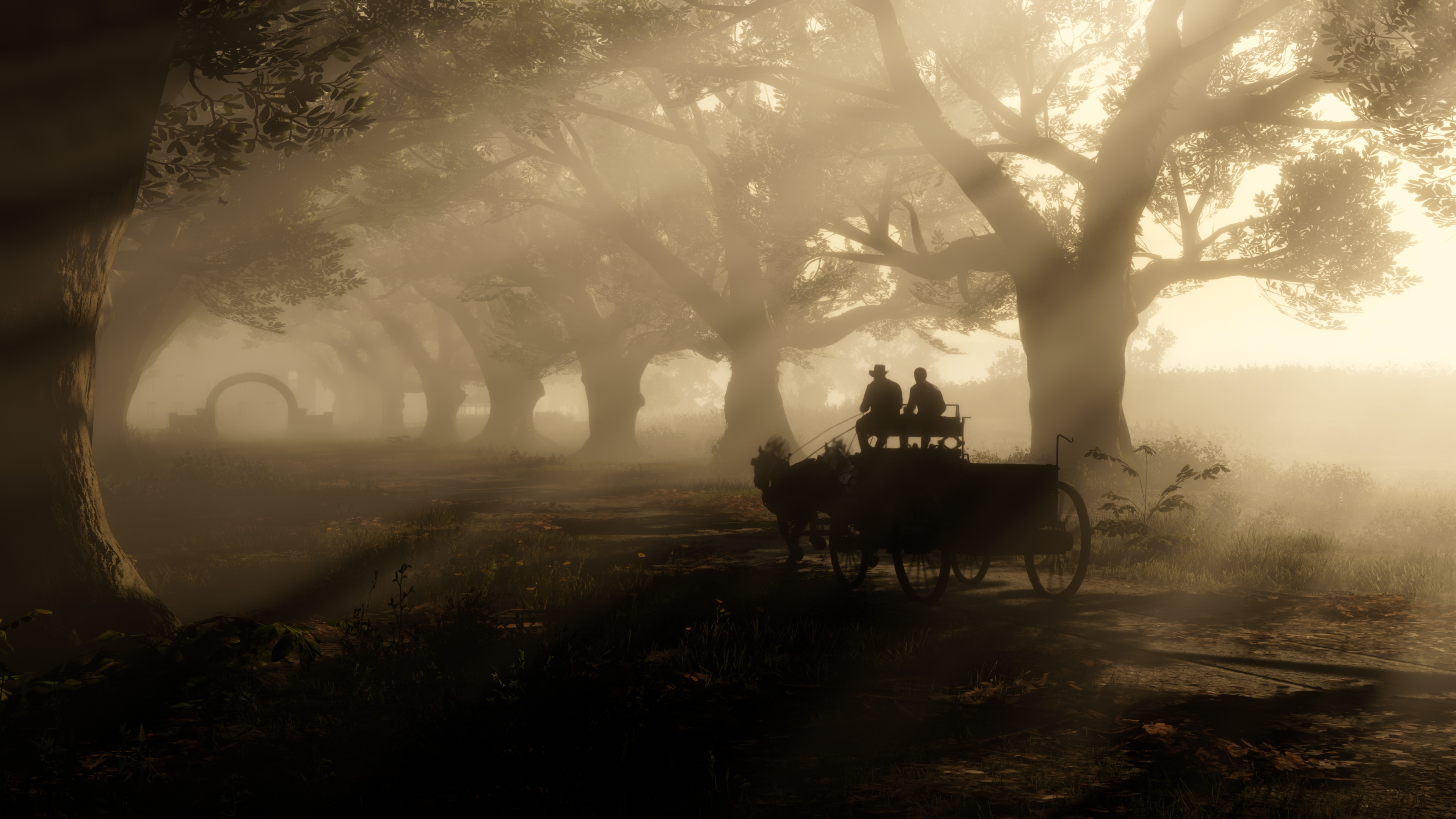 In the console version of the game, the only way to take photos up until now was to take out an in-game camera, pose, and take a snapshot. Photo mode is an actual free camera, slightly limited by range, that you can pan out, dolly around, and take dramatic photographs with. You can determine focus distance, exposure, blur, contrast, and add filters to your captures. In Rockstar’s Social Club, you can also add post effects to your creations.

It’s exactly what Red Dead Redemption 2 needed, though I’m now terrified of how long my second playthrough will take when I’m constantly pausing the action to orbit a camera around Arthur Morgan’s immaculately-rendered mug.

Photo mode will arrive at launch, but there’s no word on whether it’s also coming to console. My guess would be: yes. Red Dead Redemption 2 PC also launches with Red Dead Online and its brilliant Frontier Pursuits update, meaning PC players can saddle up immediately and get stuck into the three Online roles. PC players, the wait is almost over and you’re getting what appears to be the definitive version of one of the best games this decade.