A new leak suggests that the 825GB PS5 will give players 664GB of useable storage space on the system’s SSD.

A new image that has surfaced over on gaming forum ResetEra seems to show off the PlayStation 5 UI, along with some data about just how much space you will actually be able to use on its SSD.

Once the operating system and essential system files are taken into account, it seems to show that you will be left with 664GB to store your games and other media on. 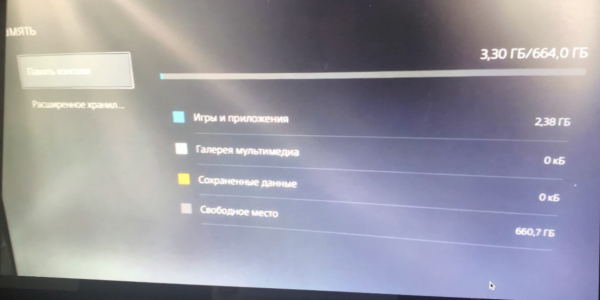 The leaked images are pretty poor quality and should be taken with a grain of salt, of course – Sony has not yet confirmed anything about the PS5’s internal storage space once the OS is accounted for.

The numbers, if accurate, aren’t that surprising, though. In September, it was discovered that the 1TB Xbox Series X would give users 802GB of storage space after system files have been accounted for (and you get 920GB per 1TB when it comes to expandable storage, too).

Considering how big current-gen games are (and how massive next-gen games are expected to be), PS5 players may end up juggling downloaded titles quite often.

The upside, though? PlayStation 5 has a feature that allows you to load a specific game mode from the home screen, which should mitigate loading times and download times to some degree.

Sony will release two consoles in November; the standard model and the digital-only models. They’ll set you back $499 and $399, respectively.