Far Cry 3 will be one of the biggest action games this year, but its push for modernism has left Far Cry 2's vision looking more astonishing than ever. Patrick Garratt's heart is still in Africa.

I'm so worried about this new direction because Far Cry 2 is one of the only games I ever truly identified with. I loved it. Yes, it was far from perfect, but I was spellbound till the credits rolled, totally absorbed in its unique, unwavering vision. Based on what we've seen so far, Far Cry 3 just looks to me like a balls-out action game.

"OK, we go. Hey sir, sorry for the delay. So you're going to a hotel in Pala. Yeah, I know the place. It's lucky for you. Pala has only one hotel still working."

It's doubtful Ubisoft Montreal could have ever created Far Cry 2 if the studio hadn't been compelled by central Africa. In the game's first few minutes, we're transported so absolutely into a pseudo-real environment of lawlessness that the team's obsession burns brighter than a bushfire.

I swat away a mosquito and leaf through my notes. I'm given photoless information on the Jackal, the man I'm here to kill, an arms trader blamed for accelerating the situation between two local militia groups from unstable peace to imminent civil war. A wide variety of mercenaries are in the area, their history ranging from experience with the USMC to paratrooping with the KLA in Kosovo to any number of private security operations. I'm ex-IRA.

My fixer seems decent. He laughs as we watch a light aircraft flee. "You won't see any more very soon." We're nearly hit another jeep, its horn screeching. He shakes his fist.

"Bloody idiot. Nobody follows the rules any more."

The only music is on the car's radio. There's no score, no Hollywood. I am there. Everything the driver says drags me further in. He tells me how uncontrolled fires destroyed the wealth of his brother, burning his bungalow and three cattle. We pass civilians loping to the airport, unbelieving that the "big planes" aren't coming back. A cow blocks our path and we sit and wait until it can be bothered to move. The music vanishes from the speakers.

"This is Liberation Radio, speaking the truth for the truth seekers. And the truth is your country needs you. Beware the evil APR scourge."

The driver throws me a sheepish look and snaps it off as we approach a checkpoint. The broadcast is a clear nod to the Rwandan genocide, in which radio stations were used by the Hutus as a key method of inciting hatred against Tutsis.

Ubi Montreal did so much homework.

The mood's fragile. A white guy heads up the checkpoint of AKs and my man buys them off with the promise of beer. The country's obviously turned to shit. The driver tells me not to worry as we pass burning huts, says it's boys letting off steam. Looks more like smoke to me. The APR and AFLL are ready to go thermo and anyone with any sense is going in the opposite direction. As we pull up to the "hotel," my malaria kicks in and the world turns black.

The UI. It burns.

Five minutes. That's the first five minutes of Far Cry 2. I've omitted a great deal. It's mesmerising in its detail as it is mature in its storytelling. Far Cry 2 was a game so far ahead of its time it's bewildering. It's about an African civil war, a warmongering humanitarian, a freeform environment so diligently contrived that I'm sure it just flew over the heads of most. It's one of the only truly adult games ever made and one of my favourite games all all time.

Which is why this movie of Far Cry 3 gameplay has been giving me rough nights.

You see, Far Cry 2 was a game of the period. It came out in 2008, and it was designed to be as immersive as possible. Action games were moving in that direction then. The UI is bare minimal, only appearing when you ask it to; you don't know how much ammo you have, for example, unless you reload. The overlay doesn't even appear when you fire. There's no "mini-map". When you look at the map, you look at a map. You can zoom in and out by flicking the scale, during which the map disappears and a new page is offered. You have a GPS for tracking position in vehicles. It's like everything had to make sense, that nothing could be implausible.

The same can't be said of what we've seen Far Cry 3 so far. That video shows a first-person shooter, first and foremost, with ziplines, overlays, enemy direction indicators and a permanent map. It's like the team doubled-back on itself.

In Far Cry 2, for instance, when you approached a door a glowing hand appeared. It's an effect designed to let you know you can do something without being intrusive to your state of immersion. In Far Cry 3, we have, "Hold X to interact," and, "A to climb."

And then there are the missions and characters. Far Cry 3 appears to be set on some kind of middle ground between The Island of Doctor Moreau and Lost. There's the psychopath we saw in the E3 reveal last year, who apparently wants to kill everyone for fun, and the new gameplay trailer shows us a mad doctor with bowls of deadly pills that packs you off on a magic mushroom hunt. You end up tripping your bollocks off in a luminous cave. 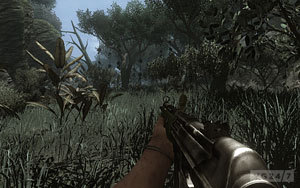 The Far Cry 2 characters were real. They could have been real. They're military men after rough diamonds. These people exist.

The music, too, is at odds with the past. Far Cry 2 had a dynamic backdrop of African drums which alerted you to danger and added to the ambience. Far Cry 3 has a thumping rock track adrenalizing your sliding moves and take-downs, because you're in a frickin' action game, bucko. Here wehave set pieces, like a crumbling wall dropping you into a subterranean pool, or a bomb scuppering a ship to leave you with a linear escape mission, Uncharted 2-style.

Far Cry 2 didn't even have an aiming reticle.

I'm so worried about this new direction because Far Cry 2 is one of the only games I ever truly identified with. I loved it. Yes, it was far from perfect. We all know the checkpoint repetition could be wearing, and the pylon missions were all the same. We all know that. But I was spellbound till the credits rolled, absorbed in its unique, unwavering vision. Based on what we've seen so far, Far Cry 3 just looks to me like a balls-out action game.

Maybe that's what people want. Maybe it was the market, not the team, that did the u-turn. Maybe Far Cry 3 will be a game of its period, as was its predecessor. I personally can't wait to play it. I'll finish it without coming up for air. But will it drown me? I hope so. I doubt it. My heart's still in Africa.