Next Xbox announced! Not. All the details on Microsoft's CES keynote: 66 million Xbox 360s sold and 44 million Xbox Live subscriptions, plus the debut of "two-way TV" and Metro-everything.

Metro - the interface introduced in the latest Xbox 360 dashboard update - was a strong theme.

Kinect for Windows due February 1.

With the games world waiting for any mention of the next Xbox from CES's main keynote, Microsoft head Steve Ballmer was joined on stage by Bing frontsman Ryan Seacrest and introduced by CES head Gary Shapiro. Festivities kicked off with a Pogo remix video of Microsoft's 15 year CES history, auto-tuned, to the bafflement of those of us at home.

Windows Phone was the first product to be showcased, with an emphasis on the Metro interface, which was recently rolled out to the Xbox 360. Although Ballmer and Seacrest were comfortable making rueful jokes about Windows Phone's lesser market share and popularity, they made no mention of Metro's poor reception among gamers. Metro popped up again and again throughout the presentation, reiterating Microsoft's intention to homogenise its product line-up.

Windows itself was next up, with some vague talk of a redesign from "chipset to user experience" before a demo of Windows 8, and a look at upcoming slim and sexy Windows 7 laptops from Sony, Asus, Acer, Toshiba, Dell, Lenovo, Samsung and HP.

Windows boss Tami Reller turned up to give the live demo of Windows 8, calling it "more than the next version of Windows - it's a new way of thinking about your PC".

Microsoft's concern over the growing prevalence of non-traditional operating systems - such as iOS - was clear, with Reller discussing the "no compromise experience" which "brings together the potential of a tablet with the power of a PC". Touch control was a major part of the "immersive, fast, fluid and dynamic" design scheme, with the Metro interface littered with "tiles" and "charms" - the former being application launch pads, and the latter, cross-application functions like sharing or display overlays.

The Windows Store will go global in each of the 100+ languages Windows is offered in, populated by "Metro-style" apps, which can be roamed across multiple Windows 8 devices. Cut The Rope was highlighted, with the HTML5 version ported easily to Windows 8. Reller's pretty good at it, apparently. The OS does contain a classic desktop, but a new Metro-style Internet Explorer which is HTML-5 focused, and plug-in free - no Java or Flash, then.

Ballmer revealed Windows 7 is the best-selling OS in the world, with over 500 million users and seven new users every second - and that every Windows 7 PC will be able to run Windows 8 day one. Microsoft's next major development milestone is in February, but no launch period was announced for Windows 8.

At this point, we were comfortably recovered from the baffling Pogo video which kicked things off, so Microsoft introduced The Tweet Choir to provide gospel-style renditions of tweets related to the keynote. VG247 staffer's cynical comments were notably absent.

We didn't get to watch much of the demonstration, as the copyrighted material could not be broadcast, but apparently IGN was noted as one of the new content providers. 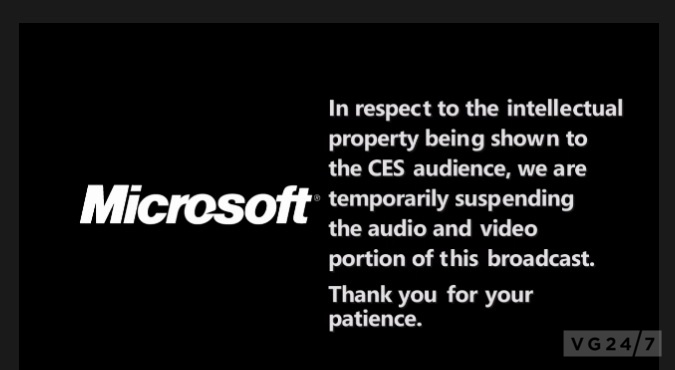 In the wake of that, a new Fox app was announced for 2012, along with other News Ltd programming, thanks to a new agreement - presumably for the US only.

Having actually shown us nothing new so far, Microsoft announced upcoming tech - "unprecedented new experiences for the TV" including "two-way experiences where you'll engage with the TV". The flagship program is Kinect Sesame Street TV, which allows children to directly interact with and impact the events of current episodes of Sesame Street. We watched Cookie Monster leave a skateboard in the street. Grover fell over, spilling all his coconuts, but our able demonstrator refilled his box using the "move of the day" - a throwing gesture. When the demonstrator chose not to interact, other characters stepped in.

Kinect for Windows was announced for February 1, after a snazzy concept video showing the motion control tech being used to defuse bombs, teach cello, and assist in physical therapy.

Closing the presentation, Ballmer commented that Windows 8 is Microsoft's most important project, but also returned once more to Metro, highlighting its placement on PC, mobiles, tablets, Kinect and Xbox 360.

"Metro will drive the new magic across all our user experiences," he vowed.

So yeah. That didn't happen.