Press and attendees were forbidden to tweet about it, and especially to take photos, but word leaked out anyway. Metal Gear Solid: Ground Zeroes is an open-world game.

The presentation began with a cut-scene which moved seamlessly into gameplay without a change in graphics. A unnamed Snake - it's not clear if it was Big Boss, Solid Snake, or a new character - was shown creeping about dispatching guards and traveling in a jeep. The scene took place at night.

The game was demonstrated on a current-gen PC, and was described as "amazing".

Other tweets on the matter were hastily deleted. Expect an official announcement and reveal soon.

After a segment on how Metal Gear debuted the practice of promoting games with teaser and trailers, Kojima made a neat segue to confirm a Metal Gear Solid movie in the works at Columbia Pictures. Avi Arad, producer of The Amazing Spider-Man, The Incredible Hulk, and Iron Man, is attached to the project.

Arad took to the stage and said Metal Gear's 25 year history proves it is a "phenomenon". He said he's spent years bringing comics to the big screen, making superheroes one of the most popular film genres today, but that video games are the new comic books. He promised to take his time and get the film right, vowed to stay true to the themes of the games, praised Metal Gear Solid as the first interactive movie, and generally baffled a room full of non-English speakers be refusing to get off stage for over eight minutes.

Kojima returned to the stage and expressed his admiration for Columbia pictures, name-dropping Stand by Me and Taxi Driver among other favourite films. Although no director or actors seem to have been signed to the project yet, Kojima mentioned a few of his Hollywood favourites - Christopher Nolan, Hugh Jackman, Matt Damon and Ben Affleck.

The movie's existence was signalled before the event began by backgrounds brought out for photographers, as one attendee shared. 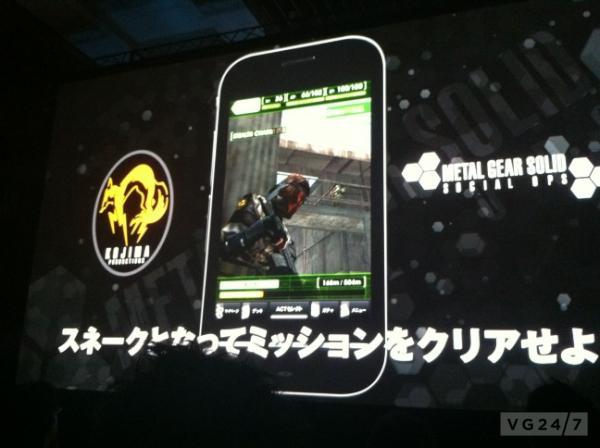 Following discussion of the film, Kojipro announced Metal Gear Solid: Social Ops, a Unity-based, 3D mobile game from Gree. The project seems to have inspired by the success of Peace Walker, proving that portable Metal Gear games can really work.

The social game will release in Japan in autumn or winter, and will be playable at the Tokyo Games Show.

Although the presentation seems to have been a fair standard showcase for the Platinum Games title, there was some new content: the video shown ended with a female voice saying "hisashiburi da ne" - "it's been a while" - apparently heralding the return of a known character. Attendees could not settle on who the voice actor used represented, with bets ranging from Rose to Mei Ling to Sunny. A mysterious female silhouette was shown among a series of character profiles, with the name carefully pixellated out.

In the gameplay demo which followed, Raiden was seen taking on a Metal Gear RAY unit. Revengeance is expected on PlayStation 3 and Xbox 360 in February 2013.

However, Kojima proved to have been enjoying a bit of a laugh at fans' expense, as after the supposedly last announcement, he wandered back on stage to give us what we wanted: the promised FOX Engine debut - Metal Gear Solid: Ground Zeroes.

Earlier this week, Kojima Productions promised to shake the industry with the Metal Gear 25th anniversary event. It seems to have been successful.