The Witcher 3 developer CD Projekt RED has previously claimed that the RPG maxes out PS4 and Xbox One tech already. Ray Willmot checks out the game's latest build and quizzes the studio to see if it's true.

You can check out a gallery of recent gamescom screenshots here.

The latest 'Killing Monsters' trailer sees Geralt beating down guards just before they execute a woman with charges of cannibalism.

Game of Thrones actor Charles Dance will have a big role in The Witcher 3, which just sounds ideal if you know the man's work.

In a behind-closed door presentation at gamescom last month, it became clear to me that while Geralt may be older he's also much wiser in The Witcher 3, players will come to understand his human side more than ever, and his unwavering sense of heroism will compel you to consider side-quests that threaten the balance of society.

Completing these quests could have political ramifications, or it could simply see the banishment of monsters terrorising the land. The way Geralt can now track beasts using their footprints, trace them to their lair, and stick a sword in their gut is every bit as poignant as his significant conversational choices, which may forever alter the destiny of a small village or large city.

Clearly, there's a lot going on in this game from both narrative and technical perspective and it's true that The Witcher 3 oozes elegance with its next-generation glow. Everything about the game feels fluid, sublime and indicative of a painstakingly created world, inspired by real-world mythology. CD Projekt RED has been quietly building its masterpiece in Poland, intentionally setting the bar high for next-generation open-world RPGs, and every article I see makes the wait for 2014 much harder.

After seeing the game in action, I got a chance to quiz gameplay producer Marek Ziemak about just how far The Witcher 3 is pushing boundaries on next-gen consoles before they've even launched, and much more.

VG247: While bringing The Witcher 3 to next-gen, have you had to make any changes to the game? Have any sacrifices had to be made to fit in with the business practices of Sony and MS

Marek Ziemak: No, it actually worked the other way around. We actually had loads of new opportunities because of the new platforms. We have got better equipment to play with and can now deliver more things in the game.

VG247: Did you make any major technical changes to either version?

Ziemak: We're using brand new technology with Red Engine 3. It's an advanced version of the engine we used in The Witcher 2 and has been rebuilt in many different ways. For example, with the open-world mechanics and system, we had to implement a streaming mechanism which allows players to smoothly travel across the world. We’ve also totally changed the AI system. There are a lot of technical things going on in the background which enable us to meet our needs and it allows us to create group tactics and many various types of enemy behaviours and things like that.

VG247: Earlier this year we saw Microsoft introduce various DRM policies on Xbox One that have since been overturned. Given your relationship with GOG.com and the fact it places no DRM restrictions on its titles, what were your thoughts on the whole process? Did it put you off developing Witcher 3 for Xbox One?

Ziemak: Whenever we can, our approach is to create games without DRM. The Witcher 3 will be available on GOG.com, day one, DRM free. But when it comes to consoles, well, we have to consider the platform we’re developing for. Of course we're independent as a games studio but when developing for Playstation 4 or Xbox One; we have to work with console manufacturers. And in the end, the market makes the decision.

If people buy consoles with DRM restrictions and they are OK with it - because there are a mass of players who don't care whether a game has DRM or no DRM restrictions - we don't want to cut those players off. So yes, we will be delivering our products to Sony and Microsoft, despite talks of DRM. If it was possible to deliver a game DRM free on those systems that would be cool, we would love it as it would support our philosophy. But sometimes we have to work with manufacturers and respect their business decisions. 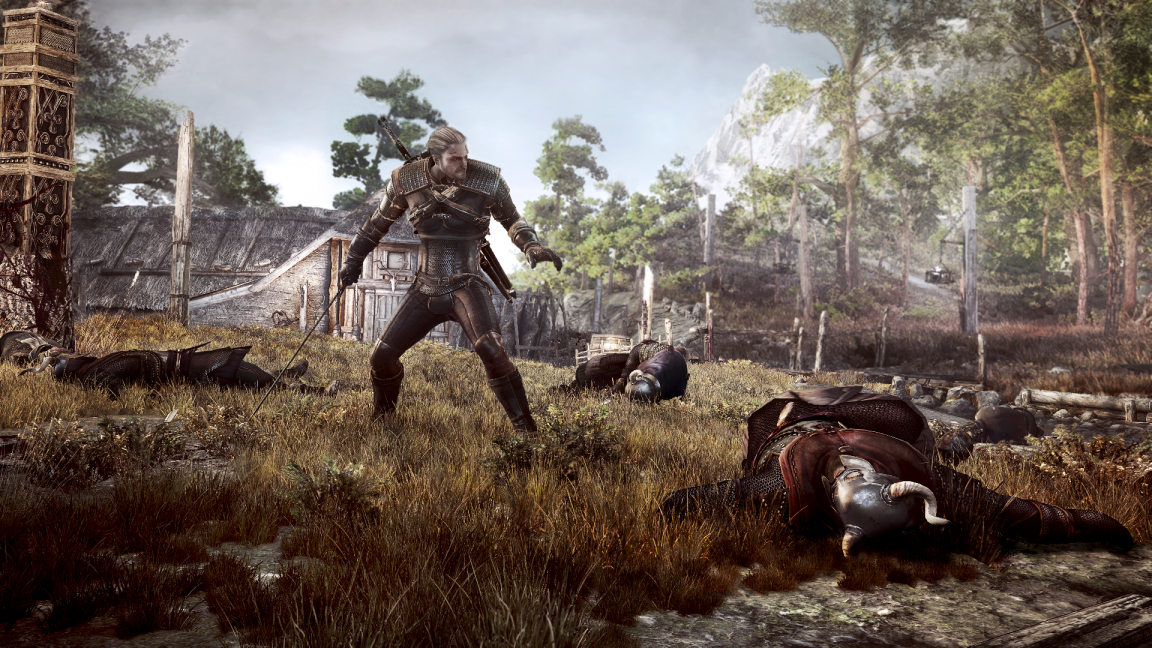 VG247: In a recent interview, CD Projekt members suggested that the team has already managed to max out next-gen systems. I found this a bit concerning as you're aiming to launch The Witcher 3 very early on in their life cycle. I know the game will be dramatically intense on PC, but can you tell us just how much the game is progressing on next-gen platforms?

Ziemak: Sure. At this point, we're advanced in testing, running and experimenting with next-gen platforms, and at this point we know the game is pretty demanding. Of course, we still have the authorisation phase in front of us, but because of size and density, we are already close to maxing out the equipment. Of course, if we find more workforce in boxes, we will surely use it to make the game even better. I think others share the same opinion as us, if there's power to be used then why not use it all? [Laughs]

VG247: You’re currently in talks with Microsoft about cross-save opportunities between Xbox 360 and Xbox One for The Witcher 2 and Witcher 3. How are those progressing? For those who’ve played Witcher 2, what differences can they expect in Witcher 3?

Ziemak: To be honest, I don't know how the talks with Microsoft are progressing in this instance. We're looking for ways to allow people to load their save games from previous instalments and put them into Witcher 3. This isn’t problematic for PC as we're in charge of that situation and control it fully. We're investigating the possibilities of transfer between Xbox 360 and Xbox One, and if its possible, we will move ahead with that.

As for what to expect, players will be able to continue their progress, continue with the decisions made in storyline of The Witcher 2. They’ll also be able to collect some stuff from their inventory, such as gold, but we haven’t firmed up the full details yet. We'll see. Things still need to fine-tuned and balanced.

VG247: Could you tell us how diverse the landscape of The Witcher 3 is and describe some of the environments players will get to see?

Ziemak: There’s a pretty huge diversity. The world is around 35x bigger than Witcher 2 and each location is different. We’re putting effort into creating unique elements in this world and producing various points of interest. We believe these things make a world more attractive and interesting. There are a few different kingdoms or relics you can visit as you travel through the game. All of them are connected and part of one coherent experience.

There are no loading screens and the transition between areas is smooth. But there are also moods in each area that feel different. For instance, skeletal moods inspired by Celtic and Norse mythology. There's also a huge city inspired by medieval Amsterdam, There’s plenty of cloak and dagger from the books, some featuring the mafia and all dark businesses being done in background of story. There are plains called No Mans Land, a ravaged territory run down by war and totally destroyed. This is just an example of the huge diversity and emotions in places. 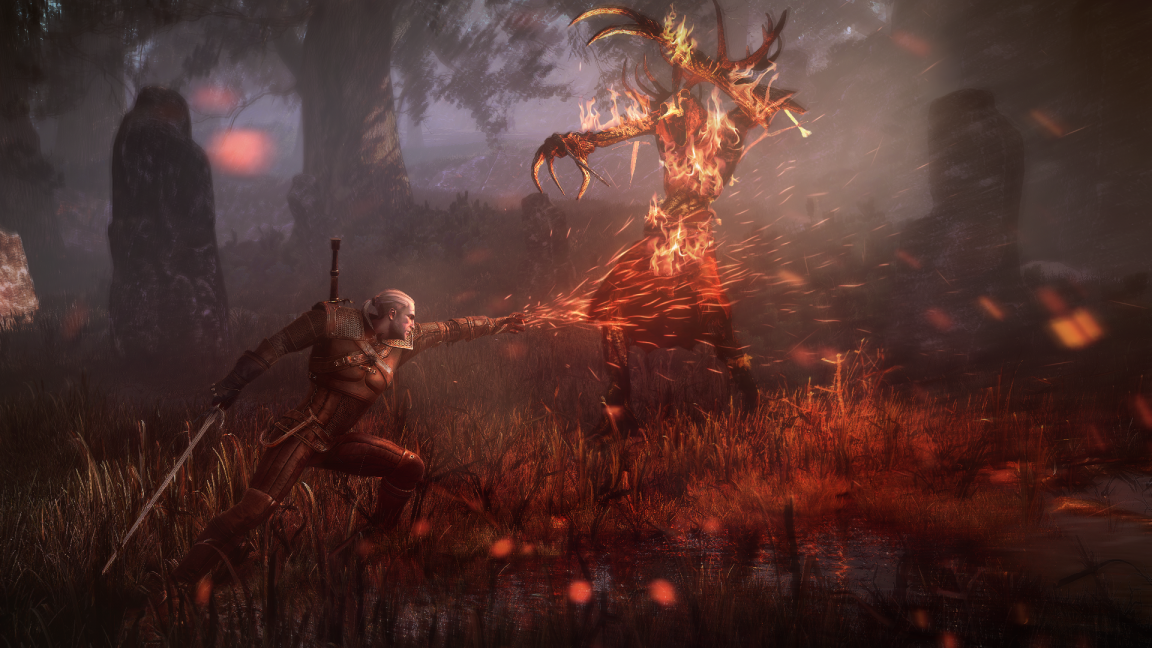 VG247: The Witcher 2 had a lot of customisation available to the player in terms of aesthetics and items. Has that system been reduced to accommodate newer players?

Ziemak: Not at all. In fact, The Witcher 3 will offer a bigger variety in terms of the amount of items you can collect. Your abilities will grow, enemies will get tougher and bigger. The amount of options available to the player are huge.

VG247: A combat mod was released for the PC version of The Witcher 2 two years after launch. Does this hint at the combat style being implemented in The Witcher 3.

Ziemak: You mean the mod released by Andrzej Kwiatkowski? Well, he is a combat developer working on Witcher 3. He is partially responsible for enemy behaviour and combat and balancing the game. It’s a cool mod and it will influence Witcher 3 as he influences Witcher 3 by his person.

Our approach to balancing difficulty and enemies is that we like different levels of difficulty for different sets of players. In The Witcher 3, we want to make the learning curve more smooth and not frighten anyone who is just starting the game. I can't answer this question specifically, but it will almost certainly have an impact on the game.

VG247: Final question. As we've come to expect from The Witcher series, the PC version will offer mod opportunities. From your experience with next-gen systems, do you think Xbox One and Playstation 4 will offer more flexibility for modding opportunities than current-gen?

Ziemak: I'm afraid I can't answer this question yet. We haven't spent too much time exploring this area as we're trying to get the core product and core experience onto the platforms. From there, we will be trying to squeeze Red Engine 3 to allow modders to use this part of the technology. But it’s a very hard question and i'm afraid I can't give you a clear answer at this time.