Far Cry 5 is stuffed with different perks that give you the edge in various situations. Here is a list of some of the most useful, along with the playstyle they best suit.

Here are some of our favourite playstyles and the best perks to pair them with:

For those who like to kill people without them even knowing they were there. 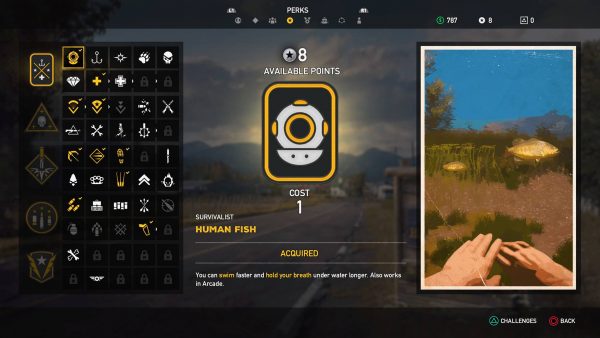 This perk is handy for those stealthy entrances. Swim up to an enemy compound and approach unseen from underwater. Pop up and duck into a bush. 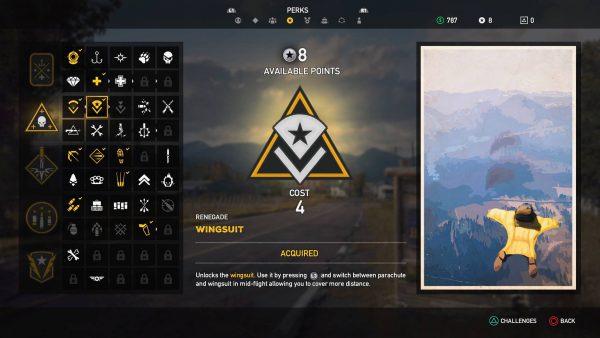 If entering an enemy compound by sea doesn’t sound like your thing, why not try infiltrate from the air? Ge the parachute skill and you can ditch a helicopter or plane mid-air to float down to your objective. Unlock the wingsuit after and you can swoop down from a mountaintop. 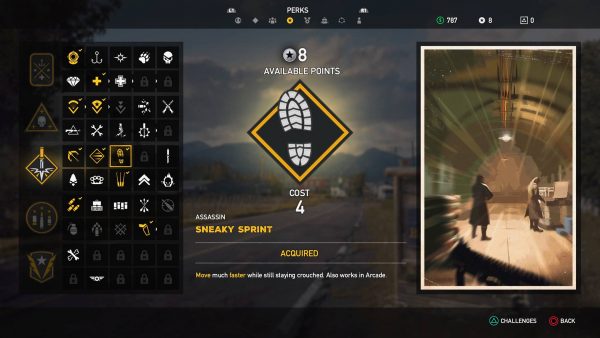 Get the drop on your enemies by running while crouch-walking, taking out enemies like an angry, stealthy turtle. 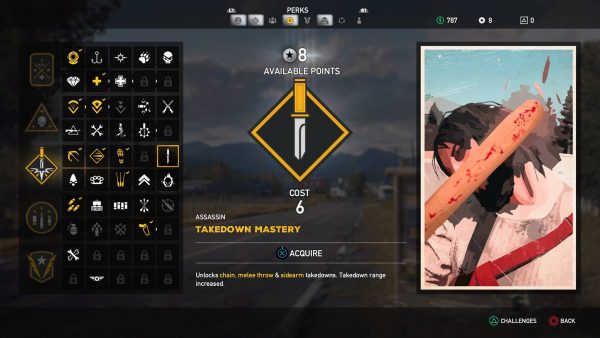 This perk is essential if you want to take down compounds like a ninja. Takedown Mastery lets you chain stealth kills together, by zooming to your next target, by throwing knives, or by pulling your first target’s sidearm from its holster and letting rip. 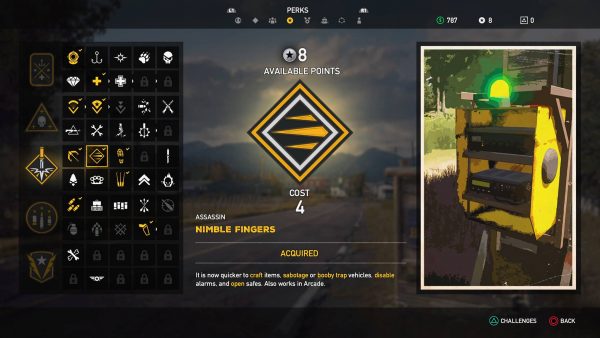 When you’re taking down a compound silently, alarms are your biggest problem. If someone spots you, they run to these things and send in the cavalry. You can stop that happening by silently sabotaging them. This perk makes the process much faster. 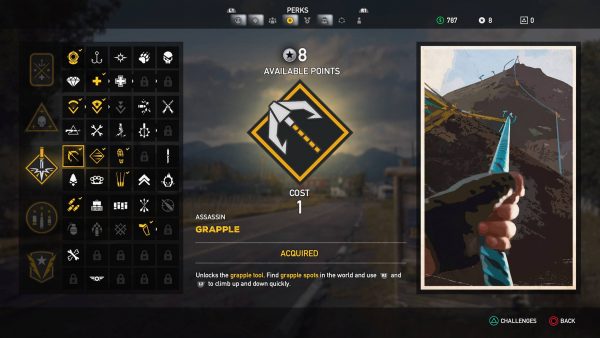 This one is extremely situational, but sometimes you just need to get to a good vantage point with a silenced sniper rifle, you know? The grapple will get you there. 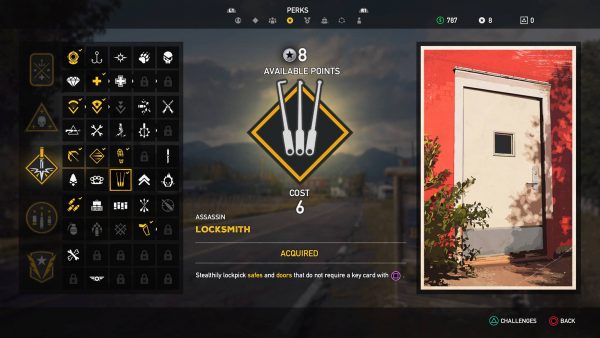 Does this really need explaining? You’re a stealth character. This lets you get into locked buildings. Get it, yeah? 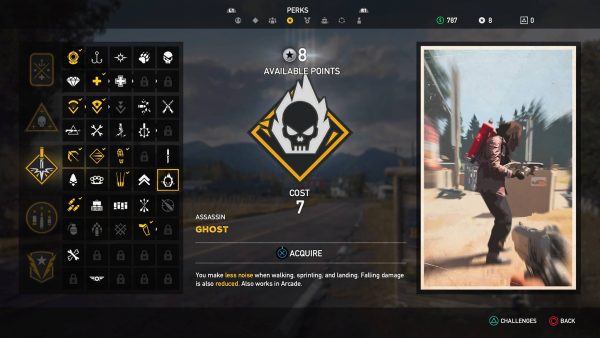 Obviously. Obviously! You are going to unlock a perk called ‘Ghost’ if you are playing a stealthy character. Not only do you make less noise when not crouched, even when running about or landing, this makes you take less fall damage. You’re like a cat. Meow.

For those who like to meld mind with machine and run people over or ram raid outposts. 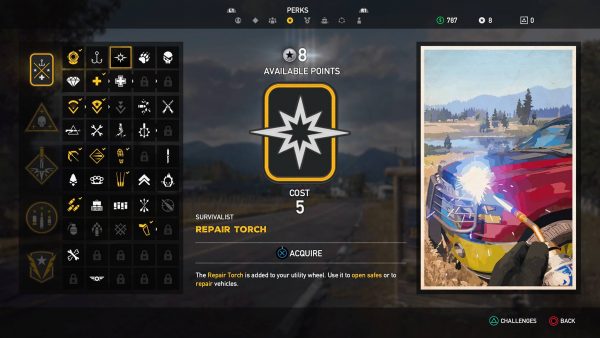 If you are planning on bloodying your bonnet with cultist juice, you’re probably going to break down more than once. No bother, grab this perk and you can fix your car with the repair torch. In a pinch, you can also use it to set fire to anyone trying to stop you from hitting the road. 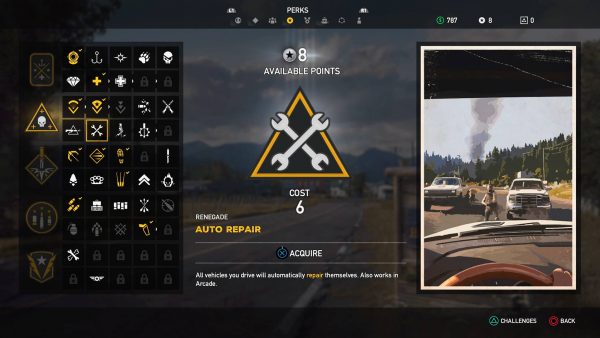 Sick of singeing cultists? Get yourself the auto repair perk and your vehicles will do exactly that - they will repair automatically.

Like blowing shit up and setting fire to cultists? Read on. 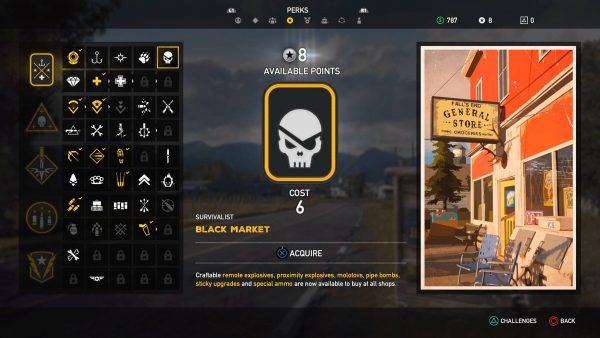 This one is simple enough - it allows you to buy bombs as well as craft them. More bang for your buck. 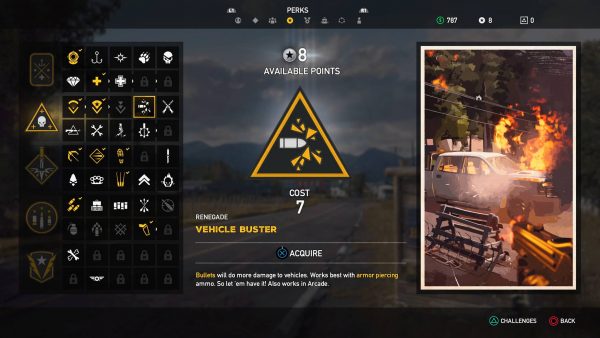 Sometimes you run out of explosives. When that happens, this perk will let you tear through vehicles regardless. 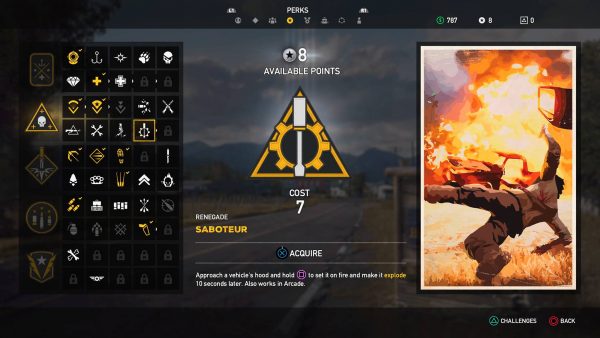 This perk lets you creep up to vehicles and set their engines on fire. Drive a car into an enemy base and use it as a makeshift bomb. 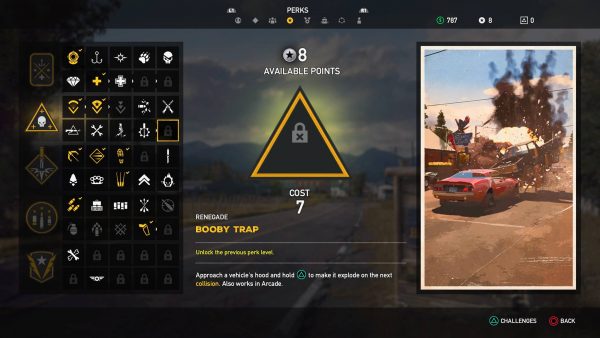 This takes Saboteur to the next level. Rig your car to explode on impact, drive it into a roadblock and barrel out before it hits. 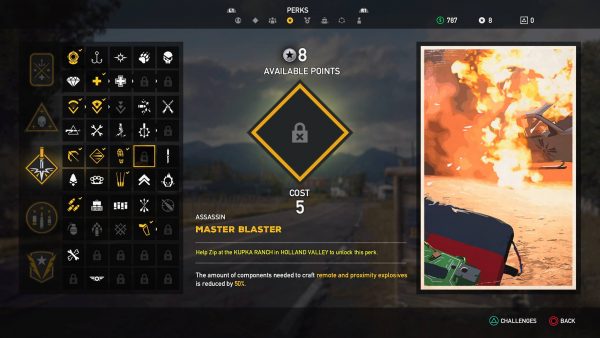 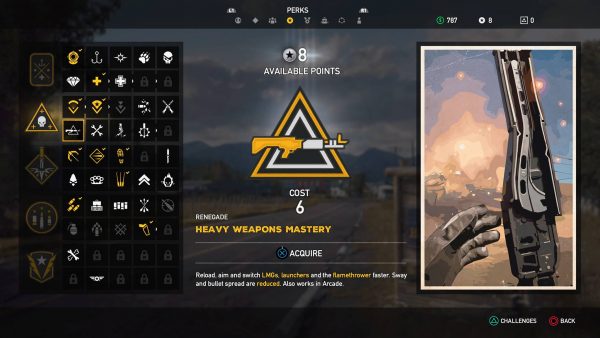 This one lets you use LMGs, launchers, and flamethrowers more easily - reload faster, switch between them more quickly, and generally cause more bangs per minute. 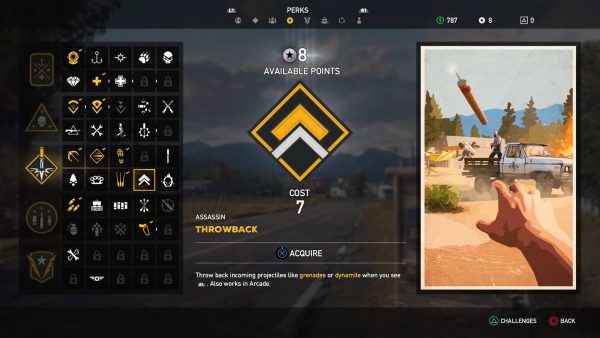 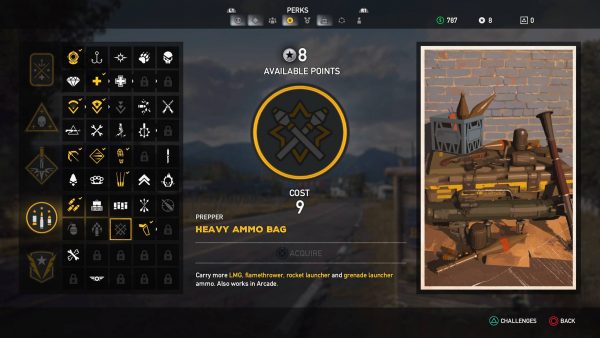 Carry more stuff to blow things up with. Yes.

If you are a no-nonsense Far Cry player who just wants to pepper cultists full of holes, this is the class for you. 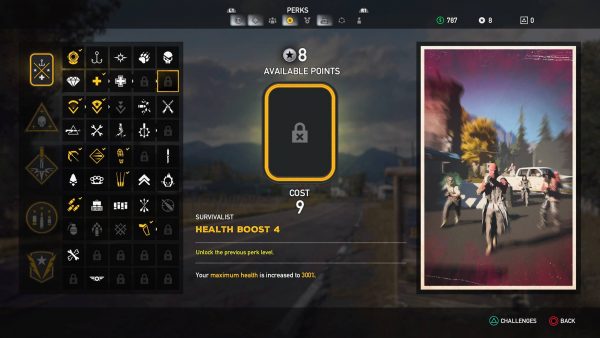 There are multiple Health Boost perks and you will want them all if you are planning to take on the cult head-on. 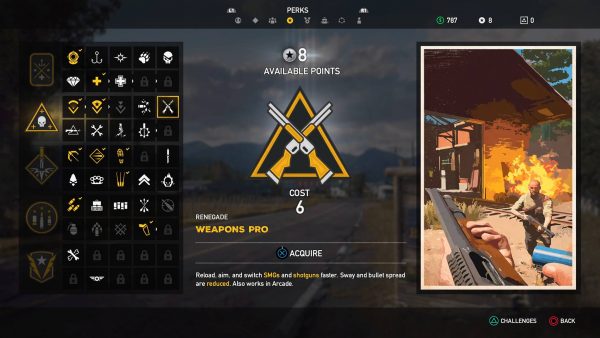 Shotguns and SMGs are good weapons to use when there's a cultist head to pop just a few feet away. Get this perk and you can handle those close-range weapons more quickly. Grab Rifle Mastery to get the same benefits with rifles and snipers. Close Combat Mastery lets you handle pistols and melee weapons with similar efficiency. 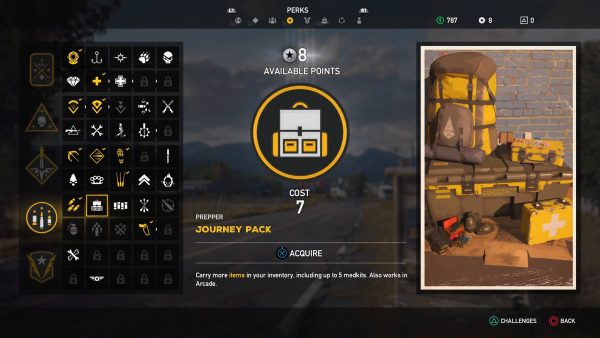 If you attack head-on, you are going to end up wounded. Grab the Journey Pack and you can carry more meds to patch yourself back up with. 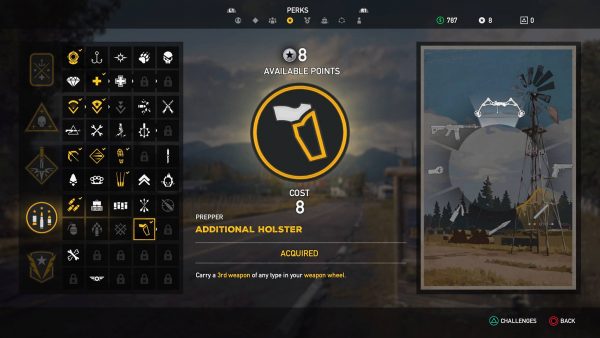 Get both of these to carry the maximum amount of weapons. More weapon slots means more options, which means you are ready for more situations.

Want to unlock these as fast as possible? Here's how to get perk points in Far Cry 5.