Progression is slightly different in Far Cry 5, so let VG247 talk you through how it all works.

In Far Cry 5, you get stronger by completing challenges and earning perk points. These points are handed out once you reach certain milestones, then you are free to pump them into whatever skills you desire.

Let's have a look at Far Cry 5’s challenges and what perk points they unlock, so you can spend your time wisely. 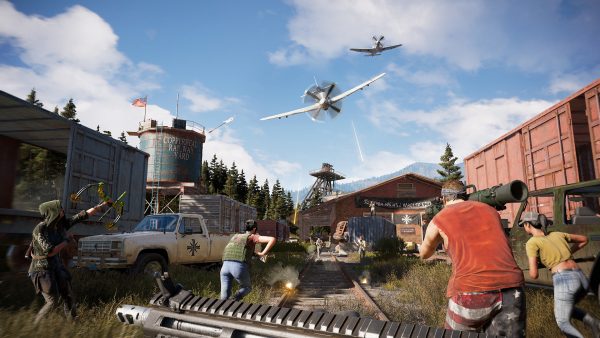 Perk point challenges are split into four categories, so you will want to spread your interest across all kinds of activities if you want to unlock things in an optimal manner. Here are the four categories, what you need to do to unlock perk points, and which ones are most worth your time.

Assault Perks reward you for raining down death and destruction on the cult across Hope County, Montana. You get between one and four perk points for every single challenge you complete in this category. Here are some examples:

There are only four awards available in the World Perks category, so have a look at them below.

This category is all about getting use out of your allies. Far Cry 5 lets you recruit NPC helpers, be they animals or human. Let them rack up kills for you and they will get better at their job. You also get perk points for doing so. Here’s what each of them gives you.

Because this is still a Far Cry game, you can hunt and kill animals. You won’t be using their hides to craft, however - the stuff you collect from dead animals is simply sold on for money. On top of that money, perk points are available for skinning every animal in the game. Not dogs, though. Here are the animals that are worth three perk points for hunting a set amount of.

All the other animals can be skinned for perks as well, but they are all worth fewer perk points. In other words, make a beeline for these if you see them.

If you come across a prepper stash in Far Cry 5, raid it immediately. These are highlighted on your map with a diamond icon. Discover the stash and you will be rewarded with a bunch of perk magazines, granting you perk points, along with a load of cash.

If you want to know what to spend your perk points on, check out our Far Cry 5 perks guide for different character builds.

Wondering how to unlock more weapon slots in Far Cry 5? Check that link.