“Something amazing has happened,” Todd Howard tells the crowd. “We made a post-apocalyptic survival game where you can do whatever you want, and everybody’s nice to each other.”

In a Bethesda E3 show distinguished by sometimes mawkish, sometimes affecting community sentiment, Howard’s statement stood out because I knew it to be true. For all the game’s well-documented faults, Fallout 76 has developed a society founded on mute conversation and kindness to strangers. But moments later, I was left wondering whether it would last.

Almost in the same breath, Howard’s team announced plans to bring human NPCs to the West Virginia wasteland. The raiders and settlers who left behind only their computer terminals and coffee mugs, the detritus of lives uprooted or abruptly ended, will return to tell their stories in person. Some of them will be quest givers, and others companions.

It’s a partial relief to see life swarm back into Fallout - at one time it was a struggle to imagine how 76 would work without it. People have always been the backbone of Bethesda Game Studios’ worlds. Where its peers at Looking Glass and Irrational embraced the eeriness of uninhabited spaces like Citadel Station and Rapture, Bethesda has long blended its environmental storytelling with a semblance of simulation, however clumsy - the sense that others are going about their lives around your adventure. In games like Skyrim and Fallout 4, it was the people who reflected your actions back at you, either through violent retaliation or vocal approval. They’ve been notable for their absence in Bethesda’s West Virginia - without NPCs there’s no anthill of activity, and no mirror in which to measure yourself.

But the studio omitted them from Fallout 76 for a reason. Howard’s directive to his staff was that every human you find should be a player - another, real life human - and even those are spread thin. At most there are 23 others sharing your instance of Bethesda’s scorched landmass at any one time. Sure, you can seek them out, chasing their icons around the map or hanging around in busy pitstops for the main quest, like the dilapidated town of Flatwoods. But in usual play, any encounter with another person is a shock, an interruption to normal service.

If you want someone to value something, make it scarce. In other MMOs, the bunnyhopping crowds of fellow heroes who gather around quest givers are so common you’re likely to run right through them. But here, made rare by Howard’s design choice, they’ve become cause for curiosity.

Players were wary of each other at first. Fallout 76’s opt-in PvP might make for a gentle survival game, but it also asks you to build a home from scratch and then leave it to be discovered by strangers while you’re off questing. The potential for damage is frightening, and sometimes the design of player structures offered a view into their psyche - chicanes of corrugated steel, turrets, and doors secured to the highest level.

But what you put out into the world is often what you get back - and in Fallout 76, locks invite break-ins. I’ve written before about how much fun it’s been to throw open the doors and usher players into my riverhouse instead. I can only assume others have had similarly rewarding experiences. I’ve seen generosity in nearly every interaction between Fallout 76 players, who don’t so much trade as impart gifts. When they find each other, they’re grateful - high level survivors for the opportunity to do something good with their wealth, and new vault refugees to be the beneficiary of it. 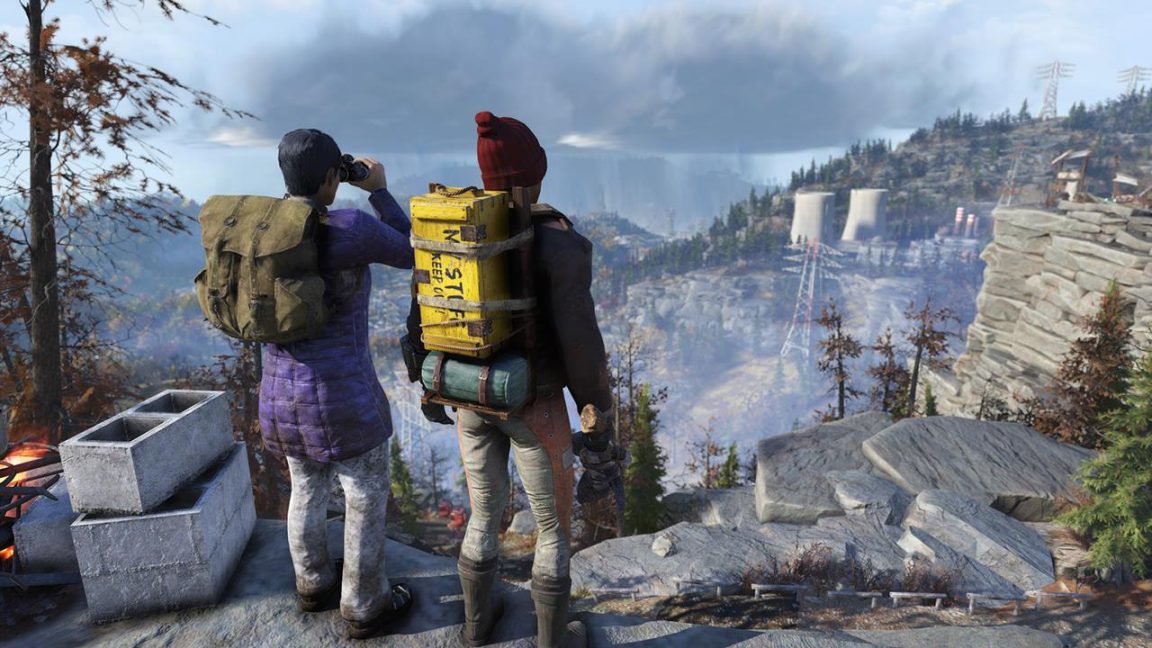 With its planned Wastelanders update, Bethesda is addressing real problems with a game world that can feel static and non-reactive. There’s little question that NPCs will correct much of what players felt was missing - after all, what would Fallout 4 have been without Diamond City and Nick Valentine? My worry, though, is that once the studio opens up that bottleneck of human contact, the way players interact with each other will change. With companions for backup and scripted conversation to fill their time, they’ll no longer conduct meetings as if handling something precious and delicate. They’ll simply sprint on by to their next quest.

Clearly there’s a need for compromise on Fallout 76’s initial premise, which led to dismal review scores. But it’d be a terrible shame if, in seeking to repair the mistakes made in creating its first online game, Bethesda Game Studios wound up reversing the very best thing about it.

“They don’t go on killing, griefing sprees - they leave food and water for the newbies and wave to each other,” Howard marvelled at E3. “I don’t know about you, this should give us all hope for humanity when the apocalypse does come.”