Poor Flatwoods. Few fictional towns in West Virginia have taken such a beating as this one, in the shadow of the New River Gorge Bridge. Water poisoning whittled away at the local populace until the Responders rolled in, bringing hope and advice like 'boil before serving'. Then the helpers upped sticks to the airport, raiders came down from the mountain, and Flatwoods was lost in the most violent bar brawl this side of Kingsman - punctuated by defenestrations and pool cues thrust through vital organs.

Now it's happening again. In fact, I'm in the doorway of the bar's kitchen when my killer stands over me - sporting a golf cap, sleeveless shirt, plimsolls, and canary yellow shorts - and chows down on my chest, chewing through sinew to restore a few health points. It's Chef's Table hosted by Hannibal Lecter.

This is Fallout 76's survival mode beta - a new addition in the latest update to Bethesda's multiplayer RPG. 'Survival' is a word open to plenty of interpretation, but here it’s finished by '...of the fittest'. The rules that ordinarily push player encounters in the game towards benevolence have been tweaked in a number of ways. The most pertinent is the removal of damage restrictions against those who haven't volunteered for combat, transforming PvP from fencing with lasers to mugging. With lasers. Other alterations, like increased rewards for killing, only further encourage an active interest in other players, their belongings, and their tasty chest cavities. 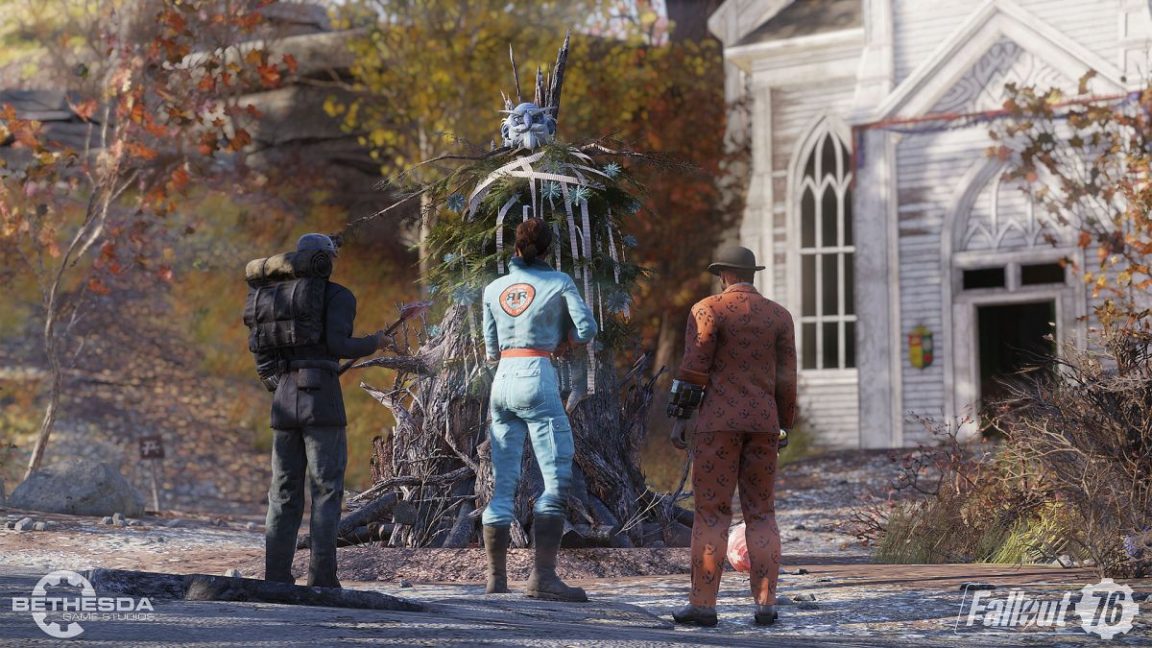 The world remains unchanged, but it doesn't feel as if I have easy access to much of it when I log in. Although all the progress and locations I've uncovered in the original Adventure mode persist, I'm only allowed to spawn in at my camp, Vault 76, or one of the rare train stations manned by robot vendors. What's more, new restrictions on building near important locations have torn down my riverhouse outside Morgantown, flat packing all that beautiful exposed wood into my inventory. So I spawn in at the vault door and make a beeline for nearby Flatwoods.

In Survival mode, the map is stripped of most of its player markers, and I've very little hope of stumbling across one of just twenty-odd humans by chance in this wide world. But I know that as the first major quest hub, little Flatwoods is the place with the highest footfall in the game, and it's where I'm likely to find opponents.

Sure enough, as I sneak into town, I spot a head, framed in the window of a well-lit church that was once the Responders' headquarters. So I shoot it off - aiming down the sights of my sniper rifle, holding my breath, and sending a bullet into the cheek of the player as they tap away at a terminal. After months of telegraphing my intentions to other players upfront, it does feel good to finally get the drop on someone. 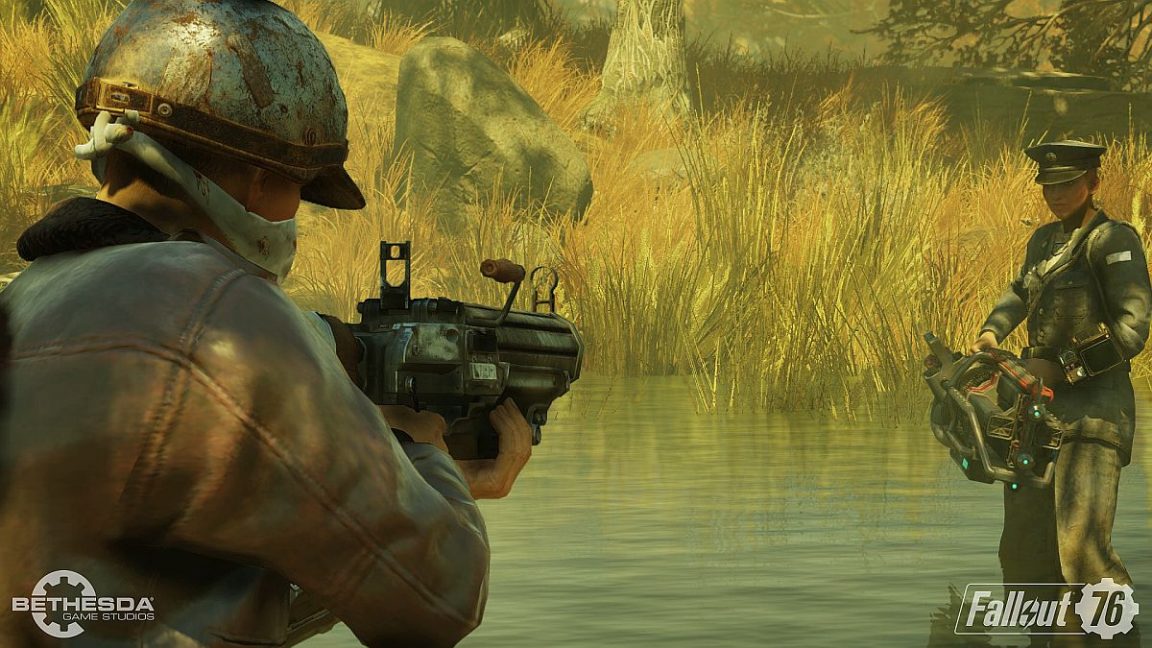 Locating the corpse between the pews, I find pockets absolutely stuffed with junk and aid - resources that would've taken me at least an hour to source the honest way among the rubble of West Virginia. I sense I'm onto a good thing, so start hanging out on the church roof, shooting between the slats, sanctuary be damned. My third kill wears plimsolls and canary yellow shorts and seems smarter than the others, hurling molotov cocktails up through the holes in the ceiling. He keeps coming back from the dead for revenge, and as I creep around in the graveyard, I sometimes freeze in my tracks at the sound of footsteps - only to hear the huff of bovine nostrils, and realise it's just the brahmin. I reach the bar, get ready to step into the kitchen, then I literally freeze as Plimsoll finally catches me with a cryogenic grenade, before pinning me with his pistol and eating my heart out.

It's been a tense 40 minutes, but it hasn't felt much like Fallout - and turning Flatwoods into a deathmatch map hasn't transformed the game into a more hardcore survival experience, at least not in the way I'd like. So on my next spawn I alight at Grafton station, and head out through the ash fields. Survival mode lets you know the positions of the top three longest-living players in the world, and one marker has stayed steady in the far north the entire time I've been playing. Perhaps they think the distance makes them safe - but they haven't accounted for the bloody-mindedness of a man with a stomach full of ragstag steak. 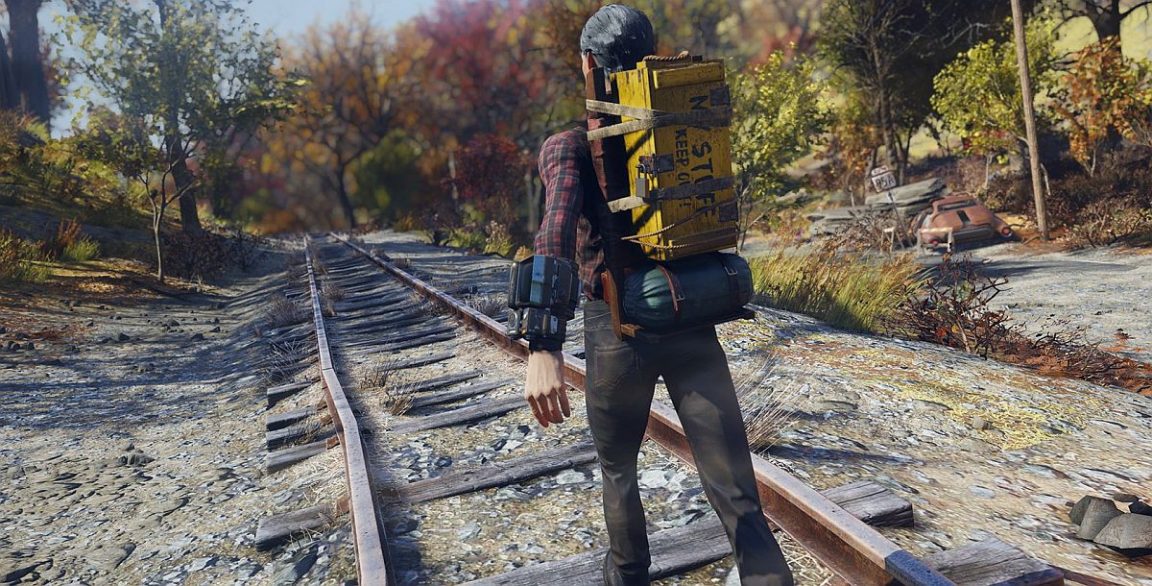 Out here, the ragstags are diseased and angry, and so is the terrain - dusted yellowy-white and jutting upwards in crags and outcrops. I have to make the trek out from Grafton a second time after plunging down a cliff face. But after navigating a plain obscured by plumes of steam, I begin the final climb towards my target. I feel as if I'm venturing into the heart of darkness in pursuit of a mad Colonel Kurtz, and sure enough, before long I start to see heads on sticks. It's oddly peaceful up here, though, far away from the gunshots of Flatwoods, the only sounds of sliding slate and billowing ash.

The mountain presents many false summits and dead ends, and at one stage I have to take the long way around to avoid a scuffle with a radrat - I’m close enough to my target that the noise of a shotgun going off would be a dead giveaway. Eventually, though, I crest behind a tent on a high plateau, and there she is - queen of the world.

BLAM-BLAM. The battle is over in an instant. I’ve taken the server’s top player completely by surprise, and she falls to her knees. But I know she’s still in there, on the revive screen. We look out together across the wide expanse, and for a moment I feel a different kind of togetherness to the one Adventure mode offers - the fleeting, bittersweet connection of two outlaws on the edge of the map.