The biggest mushroom cloud we've seen for a long time: EA's announced that it's to buy Plants vs Zombies and Peggle creator PopCap for $750 million.

Founded in 2000 by John Vechey, Brian Fiete and Jason Kapalka.

First release was Bejeweled, which went on to win 25 industry awards.

Acquired Sprout Games and its Feeding Frenzy license in 2005.

An expensive, but lucrative purchase

The acquisition will cost $650 million cash and $100 million in stock.

EA CEO, John Riccitiello said in terms of digital, the firm pulled in $100 million in revenue during in calendar year 2010, 80 percent of which was in digital sales. Riccitiello said he feels PopCap was a great standalone business on its own without EA, so if it works already "don't break it."

"EA and PopCap are a compelling combination," said Riccitiello. "PopCap has shown accelerated growth in both the social and causal markets.

Riccitiello said since PopCap currently has around 450 personnel, most of the firm's designers are stuck working on individual format carriers such as Andorid, and doing unproductive work for designers. EA has personnel who can do all the localization work, so "creators can create," instead of being stuck doing menial work.

As part of the deal, EA will be bringing Plants vs. Zombies, Bejeweled and Zuma to "new platforms and markets," although no details have been given as yet. Riccitiello said the firm has not "put a lot of thought into the Origin end" of the deal, but did say he is pleased with the firm's ability to make use of bandwidth options, which is something EA has been "trying to figure out," since it started in the social and causal market.

EA's reaffirmed its Non-GAAP guidance for Q1 FY12 and full-year FY12 despite the buyout. Also, because PopCap was its own entity, "It will continue to have accelerated margin operation growth before EA factors into its financials."

During an investor call following the announcement of the deal, EA was asked if it could hand out a product pipeline for PopCap, but it refused, saying it tends to not hand out dates for online games for competitive reasons.

Rumours of the deal has been circulating for weeks, with reports suggesting that a buyout would cost as much as $1 billion.

Shares in EA fell 3.4 percent to $23.35 a share after the announcement. The regular session for today's shares were down 0.9 percent before the announcement it would purchase PopCap.

The major players speak out

EA has published in full an internal memo to employees discussing the acquisition.

Riccitiello revealed that PopCap had "received a lot of offers" but chose EA in "recognition of [its] culture" of "respect" for "games and the teams that create them".

"There is no denying that what we announced today was a business transaction," he said. "The deal is compelling.

"Above all, we both put the quality of our games first."

"Beyond the business rationale, and the strategic rationale, I believe PopCap and EA share very, very similar cultural values. Above all, we both put the quality of our games first."

Riccitello urged employees to make contact with and get to know their new colleagues.

"They are an incredibly talented group of people – but you already know that from playing their games," he said.

"Where some companies are built on a single hit, PopCap has made lightning strike again and again. They have built a powerhouse of evergreen casual properties and proven their ability to create new hits again and again on the fastest growing platforms".

"I think there will be changes in terms of expanding our reach," PopCap's Garth Chouteau told Kotaku of the possibility of PopCap's transformation.

"We can work with a team at EA to do ports more quickly, more effectively. We have fairly modest development resources and there are ways that EA can bring some of its very substantial resources to bear."

Chouteau stressed that EA has not imposed any schedule on PopCap, and said that the developer's lengthy periods between new releases are due to limited porting resources rather than lack of ideas.

"We're about as slow as it gets. I don't think that changes materially. We devote a fraction of our overall development resources to new IP. We have more resources devoted to taking existing IP and bringing it to new platforms. I think that's going to continue as-is.

"It's all good, he concluded. "If anything, certain aspects of the way we do business just get easier and get bigger."

PopCap also sent a cute letter of welcome to its new overlord; view in full below. 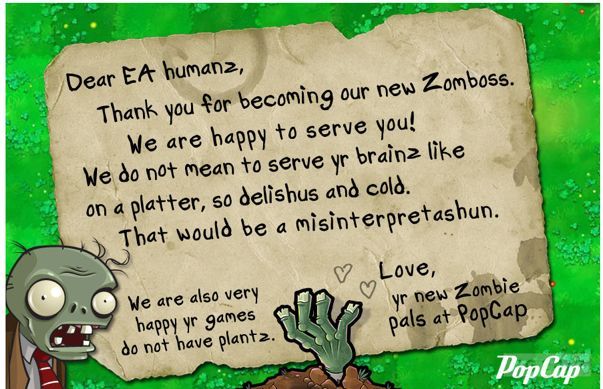