Everybody has a Battle Royale mode. Everything is Battle Royale. I mean, of course. PUBG is doing barnstorming business. Fortnite is the biggest game in the universe, or something. Who doesn't want a piece of that pie?

Of all the Battle Royale additions and spin-offs I've seen in the wake of the huge success of PUBG and Fortnite, Dying Light Bad Blood is probably the most immediately interesting, and that's because of how different its approach is. I've seen a lot of battle royale games approach things by making them bigger, like Mavericks and their 1000 player boast, but Dying Light instead knows its strengths thanks to fan feedback from the original game. This is a smaller, more intimate and rapid type of battle royale - but from what I've played, those tweaks make it shine as a unique, different experience.

The point is that if you're a hardcore PUBG or Fortnite player another similar battle royale is unlikely to unseat that game for you, but Bad Blood offers up something so different that you might actually want to play it in addition - and that's super cool to see.

Ultimately, this is still about a helicopter dropping you onto an island, but there's a few catches and wrinkles to this standard formula. For one, the island is infested with NPC zombies. Second, you're not just tasked with surviving - your mission is actually to collect blood samples from hives, gross little fleshy mounds growing out in the world. These hives obviously become a focal point for rival players, but they're also guarded by swarms of zombies - with more valuable hives guarded by multiple high-end, meat-sponge undead. Samples can also be collected from the corpses of slain players.

Once one player collects enough blood samples, a chopper is sent in to extract them. At that point any players left alive are tasked with stopping that player from escaping by chasing them to the helicopter extraction point, killing them and stealing their samples. In the end only one player can escape - and the initial player count is pleasingly compact at just twelve players.

Developer Techland describe this new play style as 'brutal royale', and though that's normal marketing guff it also makes sense up to a point. Rather than a mysterious force field or a wall of fire that forces players closer and closer together, Bad Blood instead forces players to cross paths and battle through the hives. Initially there's more than enough hives to go around, but as players clear them and pick up their samples they'll be forced to fight over the final ones.

This leads to exhilarating encounters where two or three players all descend on one hive at once. Then there's players and NPC zombies all in a free-for-all against each other. It's exciting, and it feels great when you win or when you get the drop on another human, sneaking up behind them as they dance the tango of Dying Light's satisfying melee combat against a zombie. 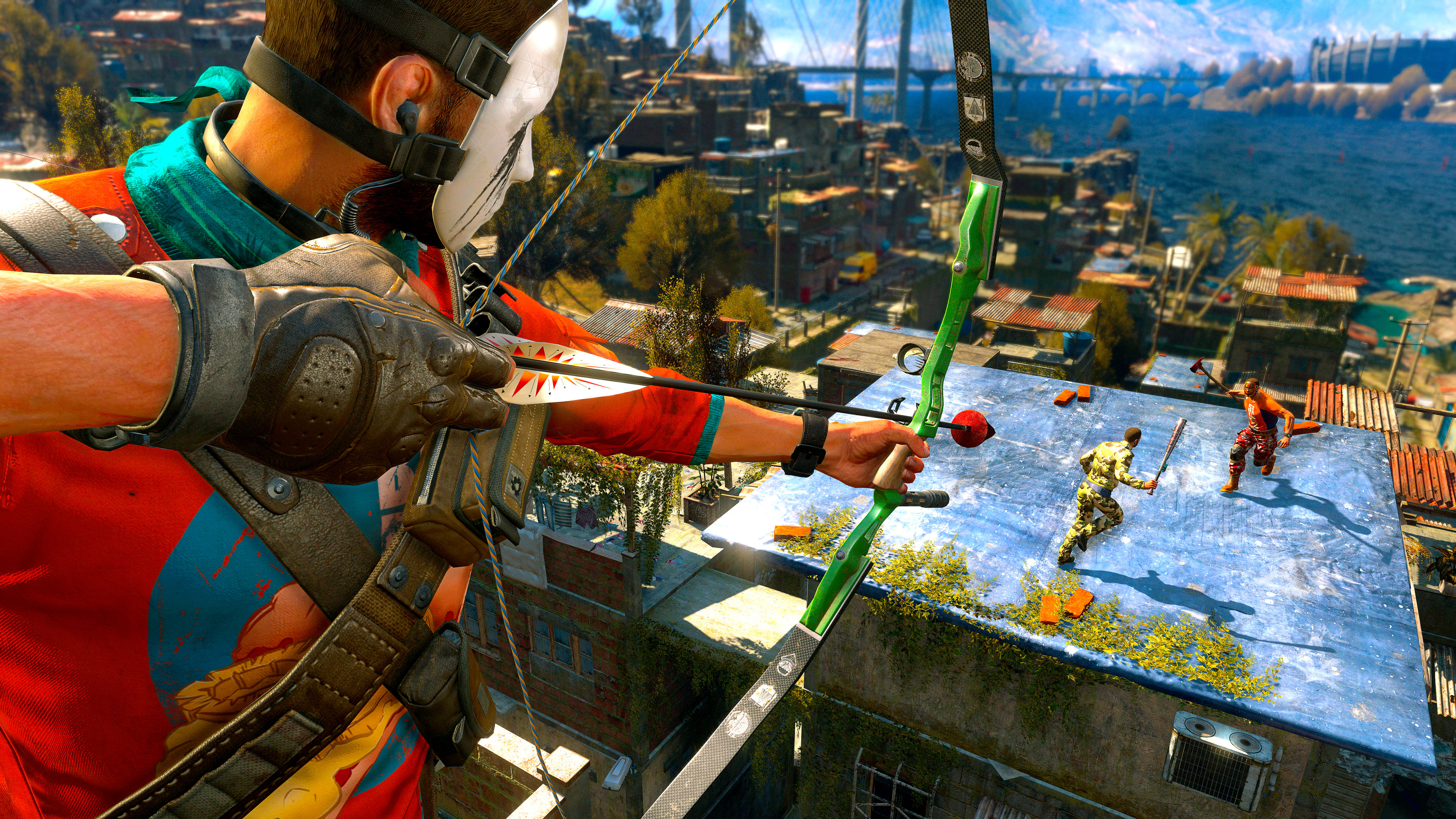 Speaking of Dying Light's combat, that's the other deciding factor: this still feels like Dying Light. The parkour makes it easy for the dexterous to escape dicey situations by leaping and clambering to safety, while the combat is overwhelmingly focused on melee weapons. There are guns out there, but they're very rare and come with little ammunition - instead, you're encouraged to get up-close and personal. This is where the reduced player count makes the most sense - in general this is a more intimate, personal battle royale experience. Nobody's going to be sniping you from a mile away.

Nobody is going to be camping, either, since the hive and sample system requires you to keep moving and keep picking them up. Samples restore your health back to max when grabbed but also boost your character level, raising your max health and attack damage. This means that if you did just choose to camp out or only scrounge up weapons in order to try to just kill the player who summons the chopper as a means of winning, you'd be at a significant disadvantage - everybody else would be a higher level with more health and more damaging attacks.

I saw all of this back at GDC in a very early state, but the build shown off at Gamescom feels tighter, sharper and crucially more fast-paced. Where other royale games can take a good half hour or more to complete, a round of Bad Blood seems like it'll typically be over in half that. The frantic pace and more aggressive play is just bloody good fun.

"Let's make Battle Royale work in our engine" sounds like the sort of decree that a lot of game developers dread. One wonders what it would've been like to be a fly on the wall at DICE or Treyarch as that decision was made for Battlefield or Call of Duty. There may have even been similar dread at Techland, but they've managed to make something that feels both true to Dying Light and to the broad concept of Battle Royale, and I'm really into it. I'm looking forward to playing more.

I won't have long to wait, either: Dying Light Bad Blood is going to enter early access on Steam in September for people who want to buy the game's 'founders pack', which gets you a bunch of exclusive cosmetic items. Otherwise, it'll be available on PC, PS4 and Xbox One as a free-to-play title with cosmetic purchases to support it at some point before the end of the year.