Destiny 2 players can help fill out their Exotic collections by hitting up nine secret chests in the Leviathan Raid.

Destiny 2's Leviathan Raid has been soundly trounced, and its many mysteries laid bare, including nine secret chests eager Guardians can seek out on their way to challenge Calus. Thanks to Arekkz, we can help you find every single one.

This page is part of our Destiny 2 guide and a companion to the Leviathan Raid guide, which is the page you'll want if you're just looking for tips on how to complete this challenging series of trials. We also have some tips and tricks for getting through the Raid a bit quicker, although if you're going for the secret chests you'll obviously want to take your time to get them all.

If you're keen for treasure hunting, it's definitely worth tracking down all the secret chests in the Leviathan Raid. As well as general goodies and activity tokens, the chests are a source of Exotic engrams, one of the keys to leveling up fast in Destiny 2, as well as obviously being one of the ways you can get your hands on every Exotic weapon in Destiny 2.

So let's get in there and do it: let's find all nine secret chests in Destiny 2's Leviathan Raid.

Open the path to the Underbelly

Immediately after spawning into the raid, run forward along the bridge and drop off the side to reach a lower level. Here you'll find a secret room with three pillars, each of which is home to two levers, for a total of six. As you face into the room, from left to right, you want to pull the switches in this order: 1, 5, 3, 2, 4, 6. If possible, get one member of your team on each lever and coordinate so that you pull them in order. This will open a path to the Underbelly sector.

From the exterior of the ship at the start of the raid, run all the way up the ramps to the top of the tower and look for an area where two big pipes come together in a pit. Jump to the pipes and run and jump up and along them to push into the darkness of the ship's interior. Leap across the obstacles until you reach the end of the corridor, then climb up into the side room to pull a lever, activating the fan. Take the fan up and turn left at the top. Run down the corridor all the way to the end to reach a door. Pull the lever (it may take a few seconds to be active if you're in a team).

Once inside the room, you'll meet with six Watchers. These tough enemies must be killed simultaneously, or they'll activate security and lock the door, blocking you from the chest. Sneak around them, avoiding the red light indicating their line of sight, to get into position to smash them - if you are spotted, just leave, let the door close, pull the lever and try again. When all the bots are dead you can pass through the previously locked ornate door and reach the Engine chest.

From the Engine chest, turn back and run along the length of the room, taking a right at the end, and then an immediate left. You can then drop down into a red-lit area with some fans. Jump through the gaps in the fans and after the second one turn left and look up to spot a platform. Jump up to find the chest. Easy!

From the Ventilator chest, drop back down and continue through the remaining fans. Hit the lever at the end of the corridor to activate another fan and ride up. Go through the doorway that is not lit in red and you'll find a red tube you can drop down. This leads to another security room populated by Watchers - again, you need to kill them simultaneously to deactivate security or the door will lock down. The treasure chest is found by taking a right and another right after entering the security room, but the ornate door only opens when all Watchers are dead.

Facing into the Pipeline room, glance left so spot a fan. Take it up then walk around the platforms and jump the gap to find a doorway leading out of the Pipeline room and back to fan near where we dropped down the red pipe. Take the red-lit door this time, and then turn right at the first junction and follow the corridor to drop down, eventually arriving in a room full of purple ... stuff. pass through and along the corridor on the other side until you reach another red-lit area, where you can jump up and then up again to a corridor with some active screens along one side. Pass through this to a misty area - don't fall in! - and jump across the platforms. Follow the corridor right to the end to find a third security room; enter by dropping down the shaft, but don't worry - you can use another door to get back out if you trigger a security alert. Once again the secret Exotic chest is behind an ornate door that opens once the Watchers are dead; it's near where you drop down into the room for the first time. 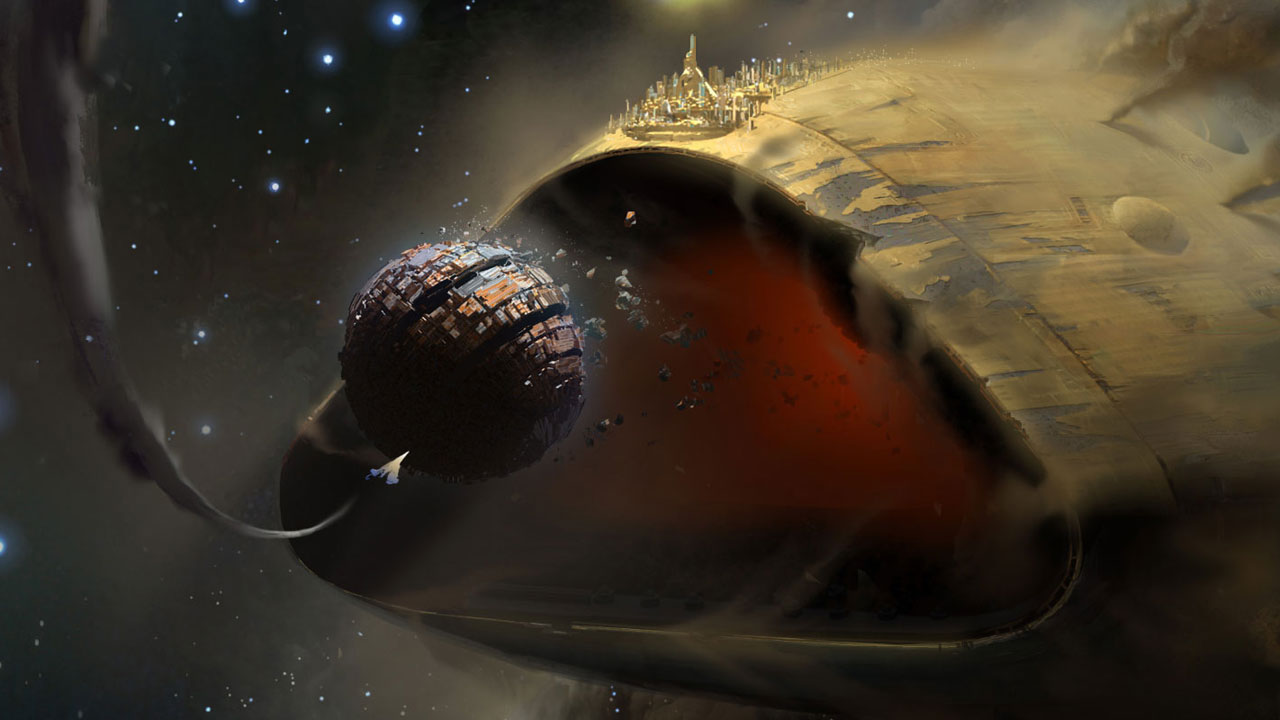 Leave the Conduit room by the doorway at the opposite end to the Conduit chest, and run forwards, bearing right, to reach a metal grate door. Jump up to the little platform above the bright light at the top of the metal grate door, and use the platforms and pipes to cross into the Irrigation room - again, you'll die if you fall here, so be careful. After dropping down move forward and turn right to find the Irrigation chest.

That's all on this side of the ship, so backtrack to the Conduit room by crossing the pipes again and use the lever to activate the fan. Ride up and make your way all the way back across the misty platforms and through the room of purple stuff. Pass through into the opposite side but stop immediately and jump up three platforms to find a tunnel. Go through and drop down to activate a lever, then ride the fan all the way to the very top of the shaft you just dropped down. This will get you back on the level where you can find the red tube you used to get to the Pipeline chest. Take the fan to the left of the entrance to the Pipeline area and get up on the upper platforms - but instead of crossing to the door leading back out towards the purple room, look for a red-lit, circular tunnel.

At the end of this corridor you can crouch and make your way through some pipes and reach an opening on your left. Follow this corridor right to the end and drop down again to reach the Drain security room. As usual, dispatch all the Watchers at once to open the ornate door in a back corner, which houses the chest.

For this one, we want to go right back to the very first fan we used to reach the first chest but take the opposite corridor - so you may find it easier to exit right out of the raid and come back rather than backtrack. Follow the corridor forward and up a ramp, then follow the corridor through a couple of lefts to reach the Transfer secutiry room. The ornate door is just to your right as you enter, and as usual, you must kill all the Watchers simultaneously to open it and get to the chest.

For this one, return to the entrance to the Transfer security room and look around for a corridor nearby with an axe symbol above it. Pass through and crouch to walk along a dark and dirty vent. When you can stand up turn left and then immediately right, and head to the end of the corridor to find a door. Pull the lever to open up yet another security room with Watchers who must be killed simultaneously to - oh geeze, you know the drill. The ornate door is at the back and on the right, looking from the entrance we used.

Go back to the Transfer room via the narrow dirty vent, and turn left immediately upon entering. Move forward to spot a doorway with a red light above it. At the end of this path you can jump uo to platforms above you. On the upper path move forward but don't take the door at the end leading to the outside of the ship - turn right just before it through the red-lit area. Follow the path up and around to a small, open room with some machinery and screens, and opposite the path you used to enter this area you'll see another doorway. Go through and down the ramp and you'll eventually find yourself in a room with a big spinning glowing thing. As you face it, there's a platform on your left with the Aqueduct chest.

Phew! That's all. There may be an optimal path to open all these chests with less backtracking then the order we've presented here - grabbing #6 while you're in the room for #4, for example. But the important thing is that you grab them all, regardless of the order. Your Destiny 2 raid crew will certainly figure out the best path depending on what keys you pick up in your run.