The Invitations of the Nine questline is well underway, so let's take a look at what you need to do over the next nine weeks.

Xur's schedule is set to change this week after the weekly reset. As it stands, he appears in a new location each Friday and stays there until Tuesday.

After this week's reset on Tuesday, he'll appear on Fridays and will stay in one location until the following Thursday at 5 pm BST/ 1pm EDT/ 10 am PDT/

You'll need to finish the weekly challenge you currently have before he appears again if you want to continue the Invitations of the Nine questline.

It doesn't seem to matter when you start the questline as they aren't time-barred, so have a look for him today if you want to begin the quest. 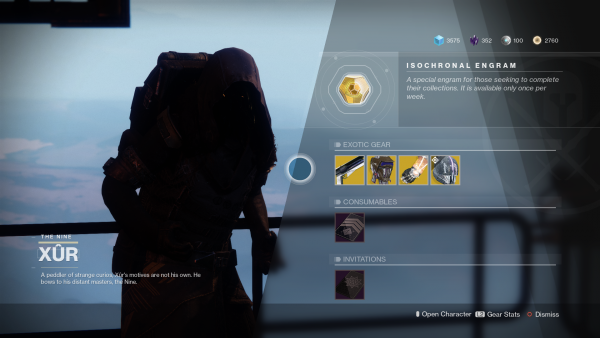 Destiny 2: Invitations of the Nine

Each week you'll have a specific activity to complete as well as collecting samples from defeated enemies. You'll then travel to the Drifter's derelict ship where you'll see some cutscenes with very interesting lore and can claim your rewards.

Invitations of the Nine - The World

The first Invitation is called The World, where you'll need to collect samples from defeated enemies in the EDZ. You'll also need to complete the Lake of Shadows Strike activity to unlock the cutscene and finish the challenge.

Once you've completed this challenge, head to The Reckoning location in the Gambit Directory to see a cutscene with The Drifter and a mysterious character.

Invitations of the Nine - Justice

For the next Invitation, you're heading to Titan to collect more sample. You will also need to complete a run of the Savathun’s Song Strike.

This week you'll see a cutscene involving the Emissary as the Nine enquiries whether she regrets joining them.

Invitations of the Nine - The High Priestess

This next Invitation takes place on Nessus, where you'll need to complete the Inverted Spire Strike and collect yet more samples.

Xur is hiding in the Tower's Hangar this week, so go and find him before the reset.

After completing this we'll finally get an update on the elusive Mara Sov, who the Nine are increasingly concerned about her.

Invitations of the Nine - The Magician

Once you've completed these tasks, you'll need to enter The Reckoning and jump on Gambit medallions to reach the platform above. The Emissary will be having a heated conversation with the Nine about The Drifter, as always.

Invitations of the Nine -  Strength

There's a suggestion from the Emissary that the Drifter can "leave the game" in this week's meeting with the Nine. Whether that's an insinuation that you, the player, are the Drifter and can leave the game or the game is another bit of lore entirely remains to be seen.

Invitations of the Nine -  The Twins

This week you'll see a giant Emissary watching a conversation between the Drifter and Orin, discussing his buddy and her brother, Namqi. Orin is the Emissary, which becomes clear during their little chat.

Invitations of the Nine -  The Tower

There's currently an issue with this Invitation that Bungie is aware of. The Vex aren't present in the Tangled Shore and therein lies the issue with the Strike this week. We'll update this when a workaround becomes available.

Prepare yourself  for this week's invitation, The Tower. It will see you heading off to the Tangled Shore to collect samples, and you will need to finish the Hollowed Lair Strike. Don't forget about the Fanatic's invincibility periods. Then, again, how could you ever forget?

That's all the Invitations we've got so far, and there are only two left, so keep checking back with us.

The Revelry Spring event is now live and will run until May 7, so jump in to get some new gear and rewards like the Arbalest Exotic Kinetic Fusion Rifle.