Microsoft creative director Adam Orth told the world to "deal with it" last week, in relation to rumours that Xbox 720 will require a constant internet connection. Dave Cook recaps the messy saga.

This is the tweet that saw angry gamers sharpening their axes and calling for the head of Microsoft's Adam Orth last week. Not only was it a callous way to address the company's paying customers, but it smacked of a blinkered take on reality.

But was Orth actually talking about Xbox 720? I'm not so sure.

While Microsoft's PR arm was quick to paper over Orth's savage riposte and assure the press that the tweets were not reflective of the company's roadmap, for many the next-gen race was over before it had begun.

The following days gave birth to Orth-related memes, widespread proclamations of Sony as the next-gen champ and this video of a YouTube comedian destroying his Xbox with a hatchet.

Now, according to fresh reports, Orth has left Microsoft following abuse and finger pointing. The rumour has been met with both dismay and jubilation; at the end of the day a man may now be out of a job over something rather silly.

Some of us laughed throughout the saga, others got incredibly upset, but now that the red mist's lifted we can look at the big picture with renewed focus. Personally, the worst aspect of Orth's reply was the way he could be viewed by the paying public, and given that Microsoft has a lot to prove in response to Sony's PS4 reveal - simply by being second out of the gate - the timing couldn't have been worse.

But let's assume for a second that yes, Xbox 720 does need an always-on internet connection to run. There were better ways to phrase it. As someone who knows full well the folly of Twitter outbursts, I understand that sometimes things seem less harsh in the heat of the moment. I can even see why the first tweet could have been made in a moment of knee-jerk foolishness.

But then this happened: 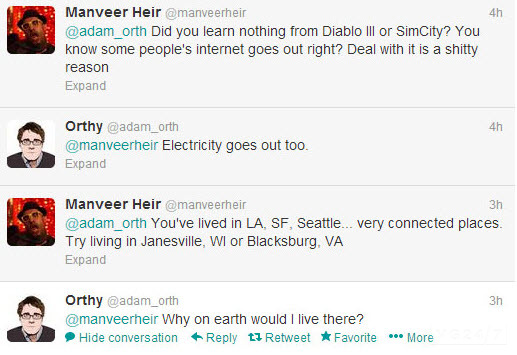 He kept going in a debate with BioWare designer Manveer Heir. What you're looking at here is the point of no return for many gamers. I'd argue that we know nothing about Xbox 720 for certain, so we shouldn't be hasty to assume it does require an online connection, but I absolutely understand why gamers are now wary.

As with any form of DRM, a lot of people view the notion of always-online consoles as something that penalises everyone - including legitimate customers - with distrust. I understand the need for anti-discriminatory blanket policies in other walks of life, but when it comes to gaming people just don't like to be treated the same as criminals.

Then, of course, you have the connotations of EA's SimCity launch fiasco. This is the most prevalent piece of recent evidence against the case for always-online consoles, and it shows what can happen if companies are unprepared.

Most nights I can't get through a session of Black Ops 2 without lag or server migration because some bad loser decided to quit out of a match. I'm on a 10Mb line that I pay monthly, so I can understand why having to pay for an Xbox Live subscription, and a new Xbox 720 console, only to have it drop out constantly makes for a poor proposition.

Recently, sources close to Microsoft gave two very different accounts of the company's new hardware. One person said that Xbox 720 does indeed require an always-online connection, with leeway of three minutes offline should your connection fail. The other said that the console can run offline without issue. Who do we believe? 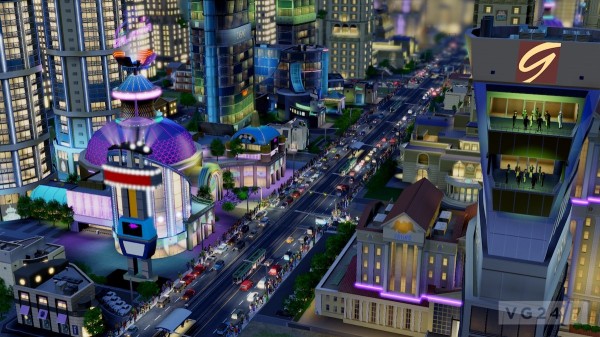 Imagine the SimCity debacle, but with the potential to cripple every game on a single format. This is the future, apparently.

These mixed messages are clearly a problem from both a PR, technical and consumer angle. For one, we're not at the stage where the global population can log-on without issue and enjoy consistently fast, always-dependable connections. It's just not possible at the moment: should these paying customers suffer because Adam Orth and his executive buddies said so?

No, of course not, but then this is when I start to get a little wary of the outrage among gamers. Orth didn't say - at any point - that Xbox 720 would require an always online connection. He may have just been speaking generally. I get why people reached this conclusion, but my gut tells me that Microsoft isn't that stupid.

Let me clarify that: Microsoft's top brass can't be this stupid if they want the company's console arm to exist in ten years time. Veteran tech blogger Paul Thurrott said this week that people are making claims about Xbox 720 based on literally nothing. He's absolutely correct. We don't know anything until Microsoft actually reveals the bloody thing.

But then I start to remember that we've heard some pretty damning testimony to the contrary, about just how out-of-touch Microsoft has become in recent years. Earlier this week we saw ex-Microsoft designer Daniel Cook talk about how brazenly the company views its competitors, and how little understanding it has of the modern gamer.

Then we have bean-spiller Joachim Kempin, who has written a damning book about his time at Microsoft. It paints Steve Ballmer as a man dreadfully out of touch with the currently market, and at one point he said that the company's future may depend on Ballmer's resignation. 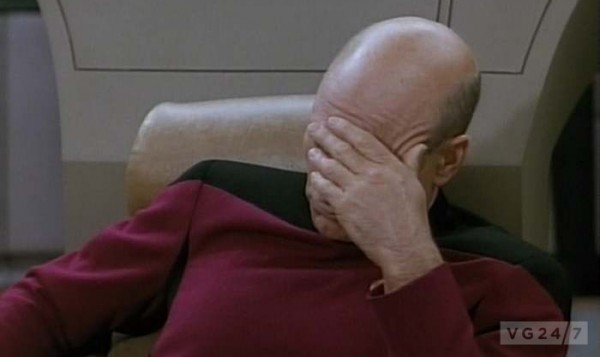 Damn you rumour mill, can't you see that you're giving the captain a headache. Knock it off!

Finally we've seen a string of UK retailers voice concern over the possibility that Xbox 720 will require an always-on internet connection. The big fear is that consumers won't enjoy being strong-armed into something that is - in the eyes of many - a pointless requirement.

One look through VG247's 'Microsoft' tag feed throws up a long line of conflicting messages, anonymous sources and second-hand accounts. There's nothing tangible in there that explicitly states what form the Xbox 720 will take, or if it requires an online connection to run.

Only Microsoft can untangle these crossed wires when it announces the console - either on April 26 or May 21 depending on which rumour you believe. With so much bile being spat over Orth's comments and current rumours, the scope for ill-informed conclusions widens. Conversely, the longer Microsoft waits to reveal its successor, the deeper the spiked pit becomes.

Always-online consoles are not a good idea - not now, not ever - so the onus is now on Microsoft's upper echelons to make sure that it doesn't stymie itself by doing something very silly indeed.

Now is the time for clarity on the matter. Just announce it, Microsoft.