A powerful, late-game sword from The Witcher 3 makes an appearance in CD Projekt Red's upcoming blockbuster, except it's not exactly a sword anymore - it's a Cyberpunk 2077 car.

It's a pretty small Easter egg, admittedly, but it's very cool to see. Aerondight is a pretty unique sword in The Witcher 3, in that its damage increases in proportion with your overall level. Picking it up late in the game and defeating enemies with it drastically raises its damage cap, meaning that it can pack a serious punch if you're clever with it.

Aerondight is in Cyberpunk 2077. That's cool! Except it looks a bit... different. 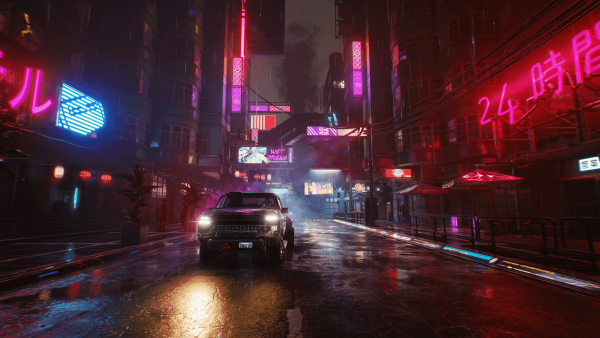 The Easter egg originally appeared over on Reddit, where someone shared a screenshot taken during the Night City Wire event from earlier this week.

Check out the post below, and see if you can find Aerondight for yourself before reading on (it's not exactly hard to miss).

One more Witcher eastern egg in Cyberpunk teaser: from cyberpunkgame

As you can see, your trusty sword Aerondight shares its namesake with the Cyberpunk 2077 car of the month. It's not clear whether or not you'll be able to take an Aerondight for a spin, but it would be pretty cool if you could. If it's anything like Geralt's sword, it should be a pretty decent car.

Also, you can summon your car in Cyberpunk 2077 like you summon Roach in The Witcher 3, so you'll likely get attached to your motor pretty quickly.

That being said, the Reaver was unveiled a little while back. It's associated with the Wraith gang, and was inspired by Mad Max: Fury Road.

There's another cool little Easter egg in Cyberpunk, too, although this one is a bit less witchy: Judy Alvarez, the leader of the Mox gang, has a Radiohead tattoo. Actually, I reckon that's witchy enough - we mentioned Radiohead in a Witcher article before anyway.

If you're keen for more Cyberpunk 2077 info, check out our impressions from our four-hour hands-on preview earlier this week.

Also, and this is important: you can pet the cat in Cyberpunk 2077.