When I first arrived at Novigrad in The Witcher 3, I immediately noticed a sense of discomfort spilling over the city walls and into the decrepit outskirts in which mistreated non-humans dwell.

As a mutant witcher, I was met with scepticism and resistance by the city guard posted at each entrance to the cosmopolitan centre of the Pontar Delta. “Freak!” they yelled. “Mutant!”

Upon gaining entry, I discovered that the discomfort I had previously detected was far worse than I could have imagined. Mass hysteria instigated by the Church of the Eternal Fire reigned supreme over the city’s inhabitants. Shadowy organisations were attempting to dislodge the negative energy harbored by the cityfolk in order to redirect it towards a target other than Novigrad’s underground criminal rings: non-humans.

Dwarves enjoy at least a degree of equality when set alongside humans in Novigrad, but elves are entirely othered. Drunkards often venture to the slums outside of the city’s battlements in order to clip an elf’s ears, or harass an elven woman. These brutes operate in accordance with a “strength in numbers” approach, which can be directly tied to the mob mentality perpetuated by the hysteria stirred by Novigrad’s religious backbone. This kind of racialized bodily mutilation is not something that is rooted in The Witcher’s fictional background, though. 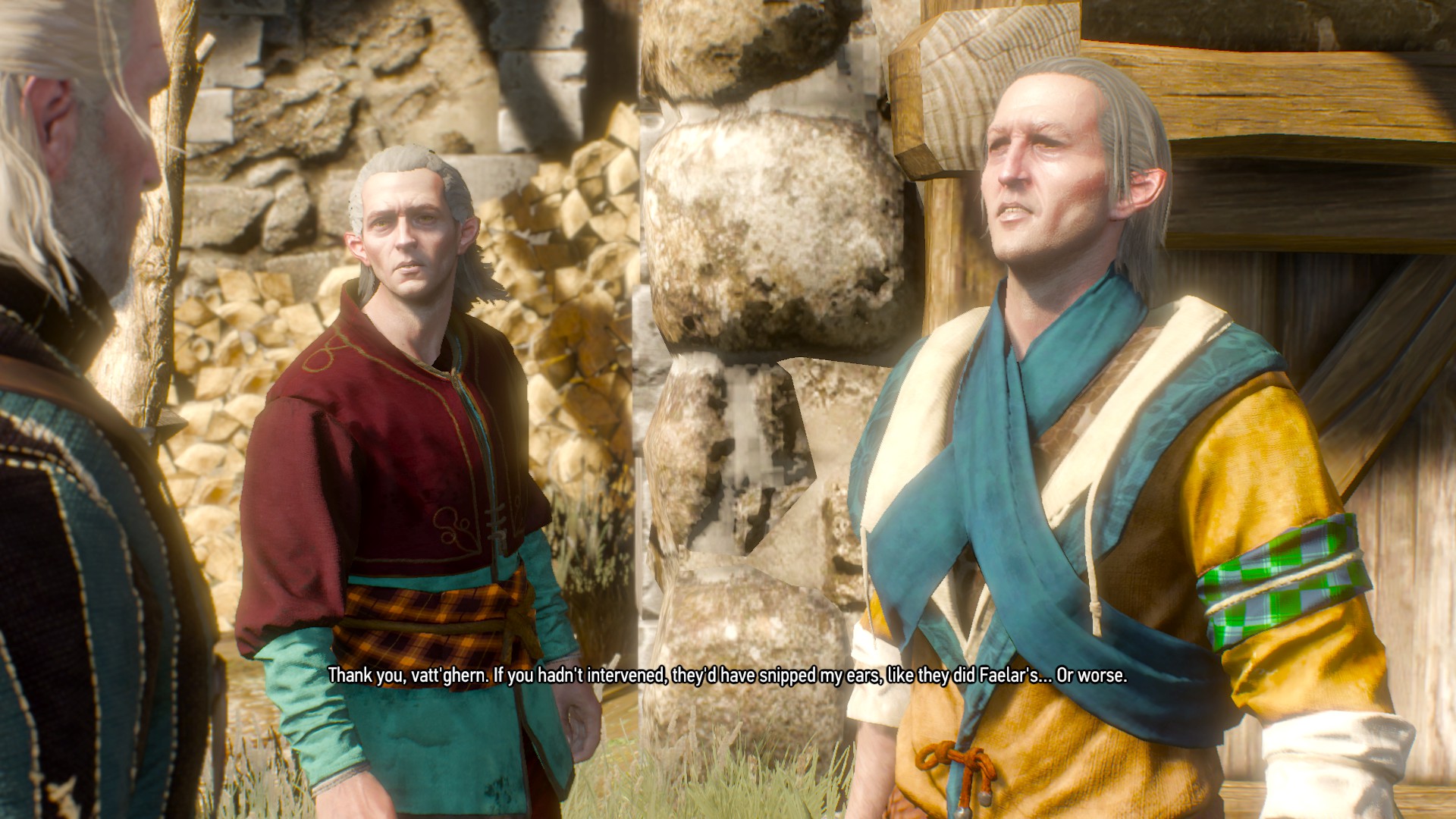 Ernest Hemingway’s “The Sun Also Rises” features a character named Robert Cohn. Born Jewish, Cohn preempts the mob mentality innate to a predominantly Christian 1920s Princeton. In order to fit the homogeneous Princeton mold, Cohn flattens his own nose, lest he be othered from the second he sets foot on the university’s Ivy League grounds. This sentiment is reflected in the words of Susan Beegel, who writes, "Hemingway never lets the reader forget that Cohn is a Jew, not an unattractive character who happens to be a Jew but a character who is unattractive because he is a Jew.”

Elven ears are an instant sign of a person’s otherness in The Witcher; in The Sun Also Rises, Cohn purges his otherness in order to premeditate an artificial sameness. He may not have been burned at the stake like an elf in Novigrad, but he certainly would have been met with prejudice and prejudice’s immediately subsequent action: injustice.

The Church of the Eternal Fire poses as the legislative force in Novigrad, having an army of witch-hunters in its employ in order to enforce its will as law. While the Church claims that its aim is to highlight subversive activity in the city, with the elven Scoia’tael commando units being cited as its reason for specifically targeting elves, its real goal is to dismantle any political opposition with the power of influencing the people under its control.

The event in history to which The Witcher 3’s witch hunts allude to most ostensibly is perhaps the Salem witch trials from the early 1690s. These trials involved one of the most devastating cases of mob-induced mass hysteria the world has ever known and ultimately resulted in the deaths of many innocent people who were othered as “witches”. Although the term “witch hunt” appears in scripture from as early as the 15th Century, the Salem witch trials are often regarded as the historical event from which the term originated in popular political rhetoric. 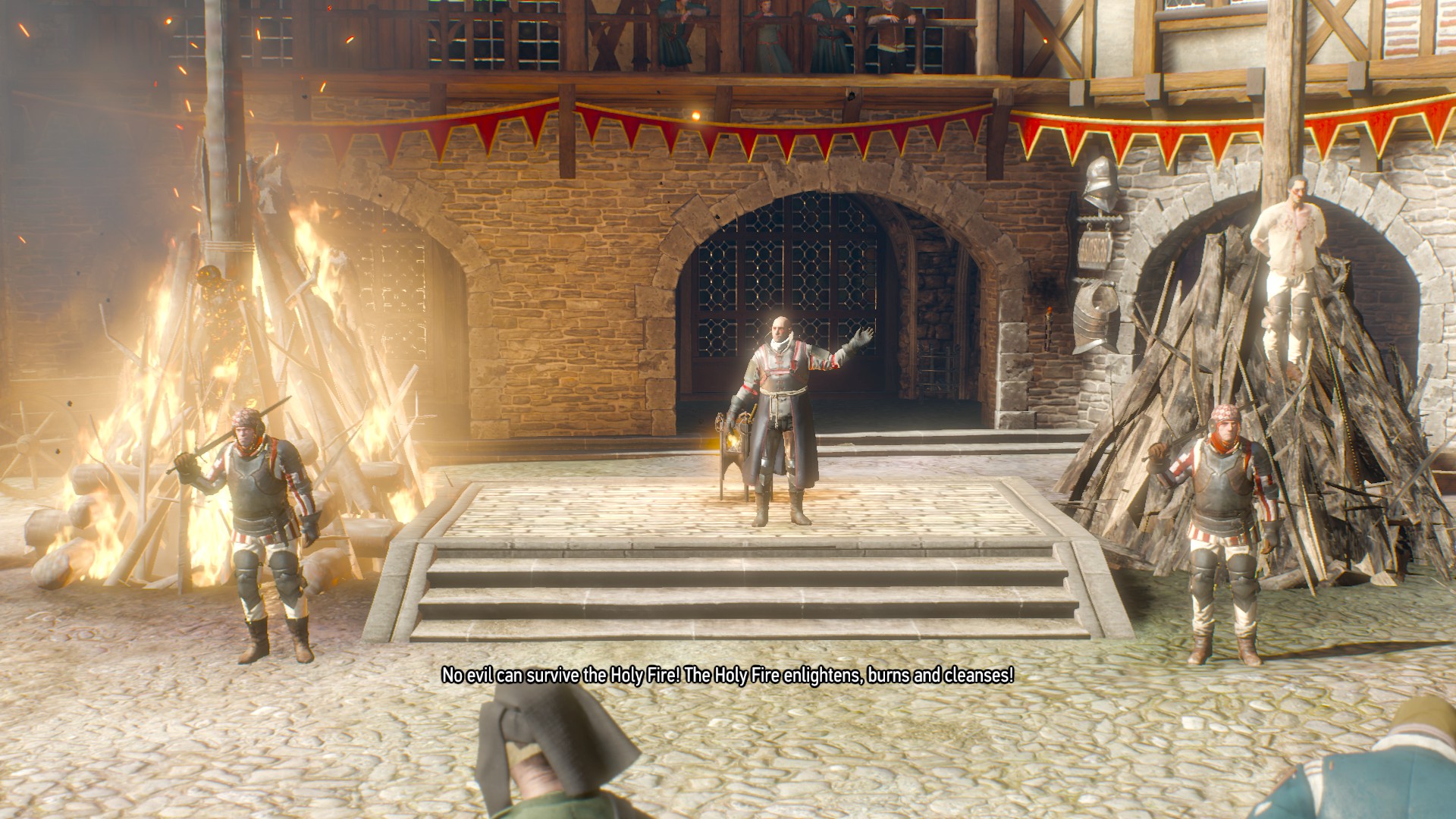 It’s no wonder, then, that Arthur Miller’s 1953 play “The Crucible” is based on the events at Salem, going so far as to name its characters in accordance with those documented in history. Miller’s play, however, sought to use this 17th Century massacre as an allegory for McCarthyism in 1950s America. Senator James McCarthy consistently made baseless claims about certain people being Communists in an emphatically anti-Communist America, in an attempt to defame people he deemed to be in political opposition to him, or people who threatened his political position. Among those people was Arthur Miller himself, which is where The Crucible’s polemic drew its influence from. Fears of Satanism in Salem are compared to fears of Communism in America, which in turn can be compared to fears of elves influencing humans to distrust the militant rule of the Eternal Fire in Novigrad. The hierarchy of the Eternal Fire is no different to the grossly misused power of Salem’s zealot judges in the 17th Century.

This sentiment was echoed in Europe as well as the USA. George Orwell’s “Homage to Catalonia” is largely concerned with the fact that Spain’s 1930s Civil War was instigated by a revolution betrayed. Orwell reported, “The Communist tactic of dealing with political opponents by trumped-up charges is nothing new… Rank-and-file Communists everywhere are led away on a senseless witch hunt.” This, of course, was on the other side of the McCarthyite polemic raging in America. In this case, it was the Communist body in Spain that persecuted civilians under false pretenses in order to further its cause and eliminate dissidents that sought to dismantle it.

All of this can be tied back to the Eternal Fire’s obsession with the Scoia’tael. The fact is that whether or not a civilian elf thought of the Scoia’tael as freedom fighters or terrorists in their own private sphere is unimportant; the possibility that the Scoia’tael could hypothetically be perceived as the latter is enough to call for a witch hunt based on that hypothesis. It is easy to call a non-human a Scoia’tael sympathiser in The Witcher because there is no way of proving or disproving that claim, and because the Church of the Eternal Fire has the seat of power in this situation, the benefit of the doubt is awarded to the lack of proof in support of the former claim. 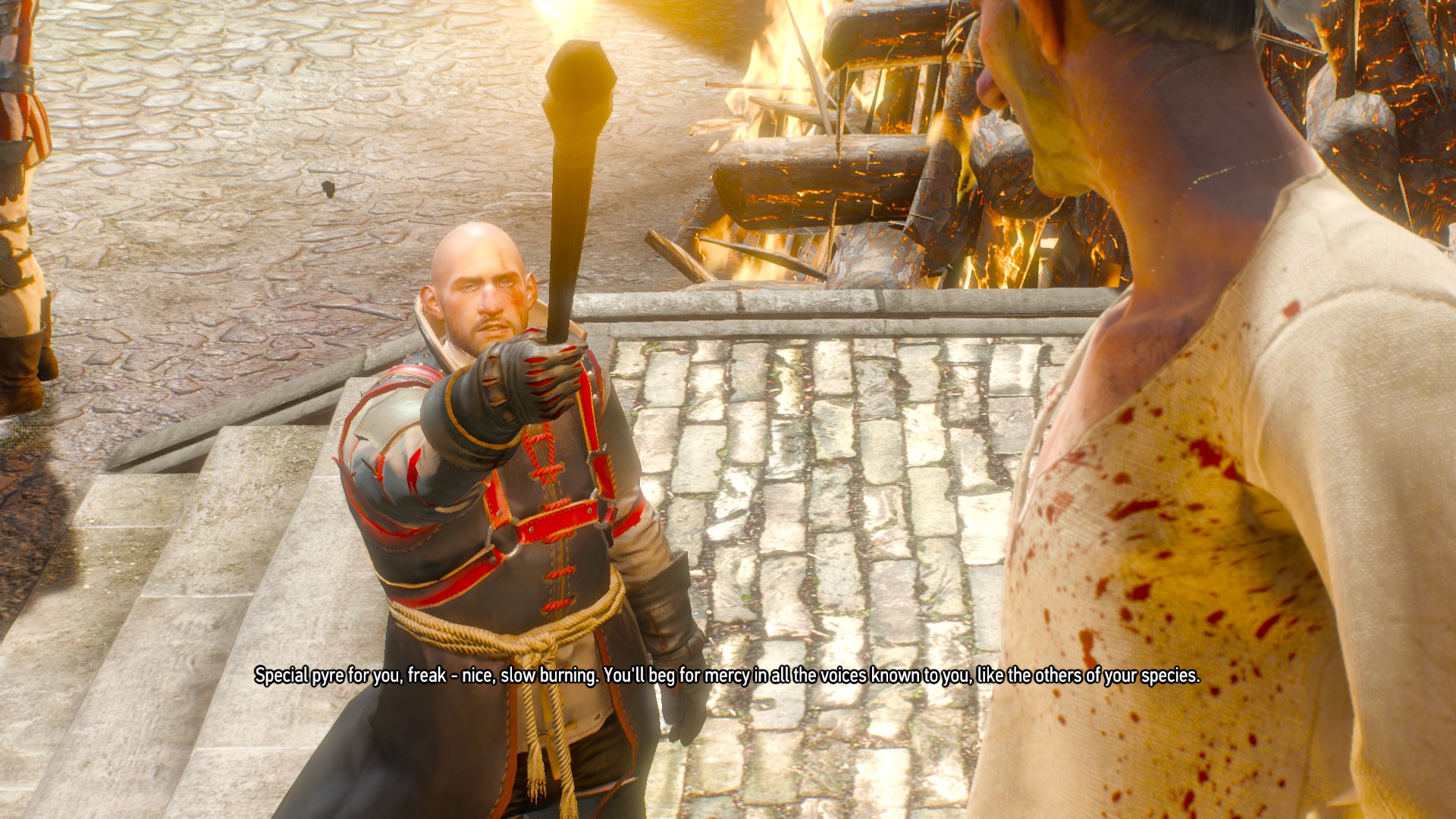 The effect this has on a society consumed by moral panic can be described by the opening lines of Radiohead’s aptly named “Burn The Witch”:

Those who refrain from acting against the witch hunts can do so from behind the protection of anonymity, only showing their faces when they are in the position of power that is afforded to the spectator of an execution. The more this is practised, the more susceptible to hysteria the populace becomes; as Christopher Hitchens puts it in Why Orwell Matters, “The word 'brutalise' is now employed quite wrongly to mean harsh or cruel treatment meted out by the strong to the weak... But in fact it means something subtler, namely the coarsening effect that this exercise of cruelty produces in the strong.” By making the humans of Novigrad accomplices to the vehement witch hunts ordered by the Church, the very people who spectate the executions slowly become empowered by them. The more they attend, the more they condone the behaviour, until eventually the witch hunt problematically becomes less of a witch hunt and more of a murder-order. 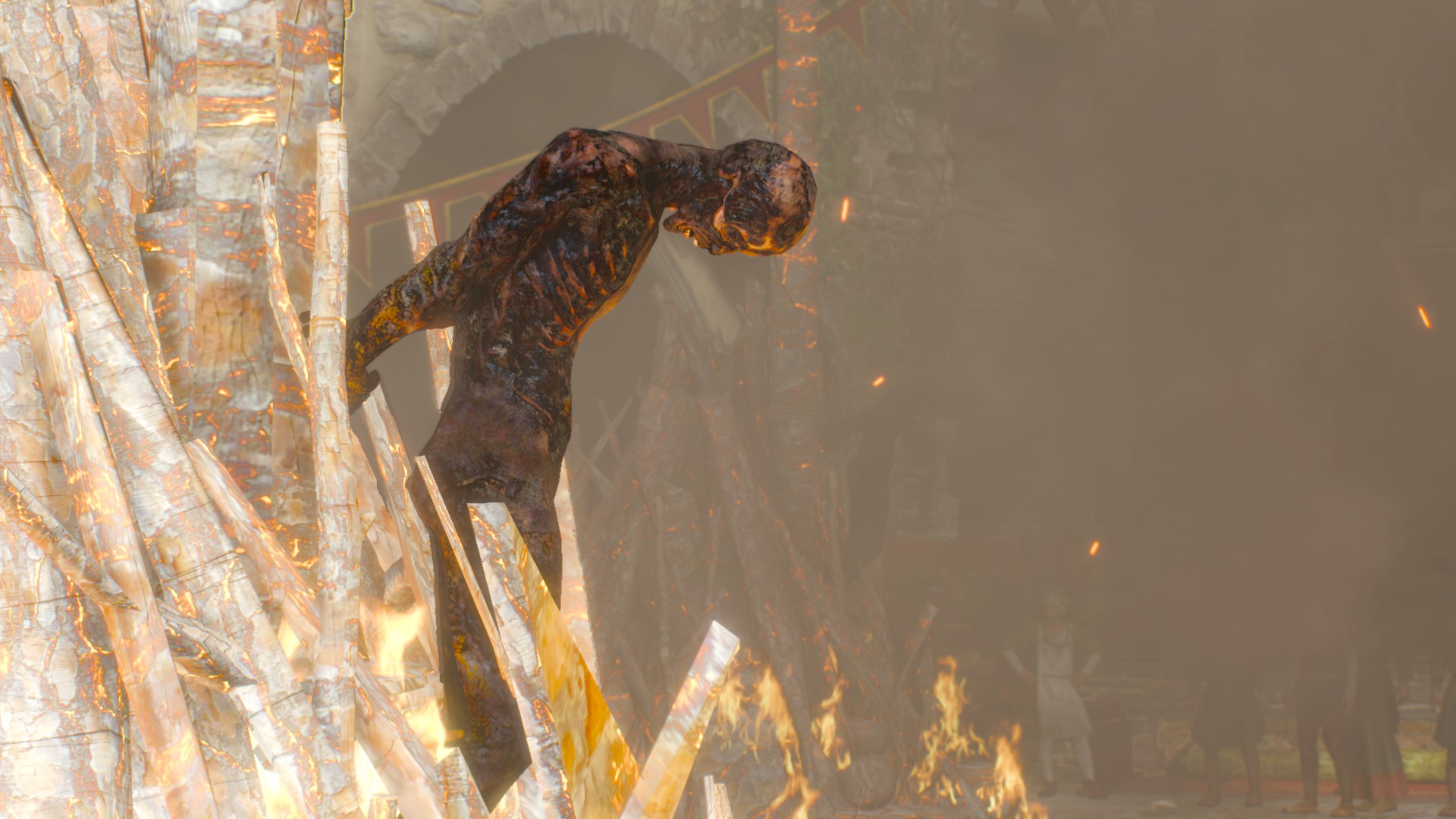 It’s essential to point out that this issue does not only reside in history and fiction. In parts of Sub-Saharan Africa, rural India, Papua New Guinea, and Saudi Arabia, witch hunts are still commonplace, but not in the figurative political sense. A 2009 UNHCR Research Paper on Witchcraft in contemporary times highlights that women, children, and marginalised social groups are regularly tagged as witches and subsequently executed, usually by beheading or burning at the stake.

This is usually ordered by a prominent social group that seeks prosperity; in Miller’s play, for instance, some witches are labelled so due to the fact that the accuser wants their land. In the aforementioned areas in contemporary times, the accusing group usually holds a monopoly over a fictional resource resembling pre-Reformation indulgences in the Catholic Church. These witch hunts are not about the people as individuals, but about the people as pawns.

The Witcher 3’s witch hunts show what humanity has been capable of and is still capable of today. Once a person is deemed as other, recruiting a mob to punish that otherness is an unfortunately easy thing for a group with authority to do. In some cases, the group is racist; in others, the group simply doesn’t see people outside of it as anything other than livestock. Either way, the Eternal Fire in The Witcher 3 highlights the fact that humans under institutional control can be herded into the fields of hysteria in order to impose a tyrannical will designed to marginalize a group and punish it for that marginalization. The Witcher 3’s elves are one of these groups, and the relentless brutality of Novigrad’s human populace highlights humanity’s innate gravitation towards cruelty that has stained every page of recorded human history to date.