Eagle-eyed fans recently spotted that a character in Cyberpunk 2077 has a subtle Radiohead tattoo.

Judy Alvarez, who appeared during this week's Night City Wire livestream, is the leader of the Mox in Cyberpunk 2077. If you've already seen her, you'll know that she has some pretty cool ink - including a tasteful Radiohead tattoo that I, personally, have considered getting on at least 10 separate occasions. 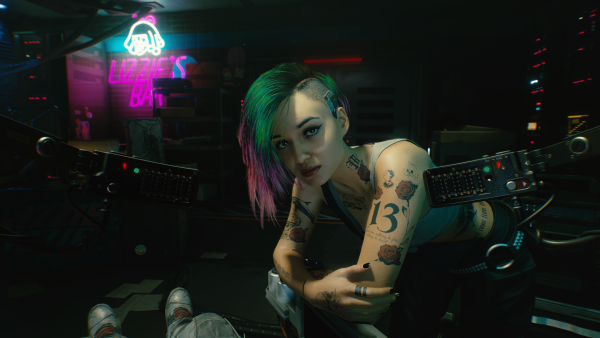 It's not the easiest tattoo to find, but folks over on Reddit caught it pretty quickly after Night City Wire aired.

Underneath her 13 tattoo, there's script in italics. It reads, "there was nothing to fear, nothing to doubt," which is a line from Radiohead's Pyramid Song, off of their album Amnesiac (which also includes bangers like You And Whose Army? and Knives Out).

It's worth mentioning that Pyramid Song came out in 2001, meaning that it's 76 years old in Cyberpunk 2077. It's basically like getting a tattoo of a lyric from Ella Fitzgerald or Nat King Cole in 2020, which is pretty cool.

You can listen to Pyramid Song below, if you're curious. I reckon it's one of Radiohead's best tracks ever, and it's got a place in basically every playlist I've ever made.

In related news, something incredibly important was recently confirmed: as it turns out, you can pet the cat in Cyberpunk 2077. There has been no intel on dog-petting yet, but at least it's guaranteed that we can have at least one animal pal in Night City. Cats are cool.

Meanwhile, people online are already coming up with designs for what what Geralt might look like in Cyberpunk 2077. More recently, a wild, cyberpunky Ciri appeared, too.

It was also recently confirmed that Cyberpunk 2077 has been delayed until November. If you need something to tide you over for the next few months, be sure to check out our Cyberpunk 2077 preview.