Call of Duty: Ghosts is written by an Oscar winner, so it should have an amazing story. But, amazing stories don't always equate to fun gameplay. Phil Owen found out whether that'll be the case or not during E3.

Call of Duty: Ghosts is being written by Stephen Gaghan. A man who has an Oscar. Sp, Ghosts will be a profound storytelling experience, and we will feel emotions while playing it. That's what happens when you have a famous writer on your game, right?

When Gaghan's role on Ghosts was announced during E3 judges week, I was skeptical. I know how major game development usually works, and while there might always be one bro or lady credited as writer who might end up being the only person receiving a WGA nomination for that game at the end of the year, but that doesn't necessarily mean what it looks like it means.

On Halo 4, for example, 343 created what that game's lead writer Chris Schlerf once described to me as a “narrative team.” This group of folks represented all various roles on the development team, and they worked together to build a story that jived with the gameplay experience they were creating. Collaborative experiences like that are the norm, which is why in general the “writers” aren't singled out.

Going to the dogs 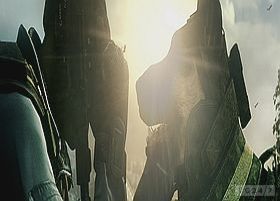 Riley the dog is a playable character in Call of Duty: Ghosts. A member of the Ghosts squadron, he is part of the player's support team and can sniff out explosives and attack hostiles. Riley sports a camera with various tech which can be used to target enemies.

But Stephen Gaghan is Stephen Gaghan, and when I had the chance to speak with Chance Glasco, a senior animator at Infinity Ward working on Ghots, I had to ask what exactly Gaghan's role has been during production. Surprise: Infinity Ward is not straying from the normal model.

“A lot of it is working with designers, and so it isn't just like he stays in a room and comes up with the entire story,” Glasco told me. “He works with pretty much all the designers as kind of like the creative side of the story. Because we know games, and he knows stories, and [we use] his knowledge in the creative aspects of stories and our knowledge of gameplay.”

But when Glasco says Gaghan is working with designers, he's not talking about an intimate Halo 4-esque narrative team. No, sir. Glasco said that while there are certainly folks on the team at Infinity Ward who had more say in the plot than others, pretty much every designer contributed. This was a truly large scale collaborative effort, and Glasco described their process and mindset for me in a bit more detail.

“When you're developing a game, you've got designers on it who are just thinking of good mechanics, good gameplay ideas, good ideas for levels while you're simultaneously coming up with the story. The difference between movies and games is you have to make those work together,” Glasco said.

“The bottom line here, is the most important thing about making a game is making it fun. And if you can have an amazing story along the way as well, that's great. But you don't want your story to keep you from making something fun.”

Speaking of fun, at E3 we were shown three missions from the campaign, each of which highlighted some sort of new mechanic or set piece that we haven't seen before in Call of Duty.

The first was a pretty standard stealth-oriented section in which you've got two siblings trying to progress through an area without starting a full-on firefight. The new wrinkle, of course, is Riley the Dog, whom you can control via tablet kind like when you've launched guided missiles in previous games.

Next, we saw a team of three infiltrate a skyscraper in South America, and the twist here was that they would rappel down the side of this building and shoot foes through the windows. These weren't firefights, but rather another stealthy segment. Then the demo skipped forward in the level , and the guys are running through the building as it started leaning over – it didn't appear to be as smooth of a section as the sinking ship in the original Modern Warfare – and they end up falling out the side of it. Exciting!

CoD: Ghosts - Into The Deep Gameplay

The third level was all underwater, and it was yet another small-scale, stealth-oriented. But, like, it was underwater, and later on there were some battles that seemed interesting. But at the end of the demonstration, we hadn't seen any large-scale combat situations – the building falling over doesn't count because there was no actual fighting during that section, but admittedly that is kind of a big set piece – and so I mentioned to Glasco that the difference between Infinity Ward's last project, the constantly epic Modern Warfare 3, and what we were shown of Ghosts was rather stark.

“We like to have really good pacing, which mean sometimes having a really intense, pump-it-up-to-11 level, you know, craziness going on, and then maybe the next level will be slower, more stealthy level. We still maintain that within Call of Duty: Ghosts,” Glasco replied indicating, as you would probably assume, that Ghosts has some as-yet-unseen wild shit in store for us. But he did qualify that comment a bit.

“I think it will be a little bit more of an intimate experience, let's say, you know with the dog and such.”

Indeed, Ghosts is at its core a story of two brothers and their dog fighting a sort of covert war in a post-apocalyptic world – the first of the demo levels we saw featured what appeared to be an enormous impact crater of some sort near San Diego – and that aspect of the premise in itself implies a cozier story than we've typically been treated to in this series.

But who really knows at this point? Activision is being cagey about plot details, saying only that an “event” happened in the present day that crippled the US and that there are new world powers, including a South American conglomeration of nations like the European Union. For whatever reason, they won't give us more than half the premise of the story, and while I knew Glasco wasn't going to fill me in on the details, I did have to ask why they were holding back such basic information.

“When you market a game you only market a certain amount of it at a time, and eventually you get deeper and deeper,” Glasco said, not really getting into whether there was some in-game storytelling reason for not saying what the Event was yet or if they were just emulating JJ Abrams.

In any case, I'm inclined to believe the basic premise won't be a secret that lasts until folks are actually playing the game, but they'll tell us when they tell us, and no sooner.