Batman: Arkham Origins developer Warner Montreal explains to VG247's Dave Cook why it's the darkest, most personal entry yet. He also goes hands-on with Deathstroke and makes a tit of himself.

Developed by Warner Montreal, Batman: Arkham Origins will launch Worldwide on October 25 for PC, PS3, Xbox 360 and Wii U.

The campaign section I saw featured crazy pyromaniac Firefly. You can see footage of him in action here.

We've got a new batch of screens here, showing the Batcave, Mad Hatter and more.

As with previous Arkham titles, Origins will come with a batch of alternative costume DLC. Check out what's on offer here.

Throughout Christopher Nolan's trilogy-closing flick The Dark Knight Rises, we hear Bruce Wayne stressing that the point of his crusade against Gotham's criminal underbelly was to establish a symbol people could aspire to, and to show that anyone can be Batman, just as Warner Montreal has proven that any studio can make a solid Batman game.

It's only natural that gamers out there feared for the health of the Arkham series once Rocksteady Studios announced it was taking a step back from the DC Comics brand. After all, the London outfit had released not one, but two critically-acclaimed licensed titles amid a quagmire of lazy tie-ins that do little but piss on the legacy of their source material. The team had defied convention and showed the industry how it was done.

After playing Batman: Arkham Origins at gamescom last month I sat down for a chat with Warner Montreal creative director Eric Holmes to discuss the enormity of shouldering Rocksteady's vision, and to get a feel for how the transition has produced a game that looks to be every bit as polished as its predecessors.

It began in July 2011, after Rocksteady handed over the Arkham code-base to Warner Montreal. "I started in October," Holmes recalled, "and by that point we were messing around with what we could do, and our team had already coded stuff in Unreal before, so we worked out how the mechanics worked and how that particular code-base was set up. But really it was up to us to decide what we wanted to do, and take the solid foundation that was there and figure out what we were looking for in this game."

The base concept is that Batman: Arkham Origins takes place during 'year two' of Bruce Wayne's campaign of justice. GCPD Captain James Gordon hasn't earned his 'Commissioner' title yet, the Dark Knight's still a wanted vigilante pursued by the cops, and he hasn't crossed paths with The Joker yet. This is a very different, darker take on the comic book lore, and it all takes place on one cold, fateful Christmas Eve night.

I asked Holmes if there was ever any doubt that Warner Montreal would make a prequel to Batman: Arkham City, and he confirmed that the idea had been there since he joined the team. As a comic fan himself, he was always drawn to the 'Year One' arc, in which Bruce Wayne figured out his modus operandi, and encountered several iconic villains again for the first time. This is where the Arkham Origins' personal plot comes into play. 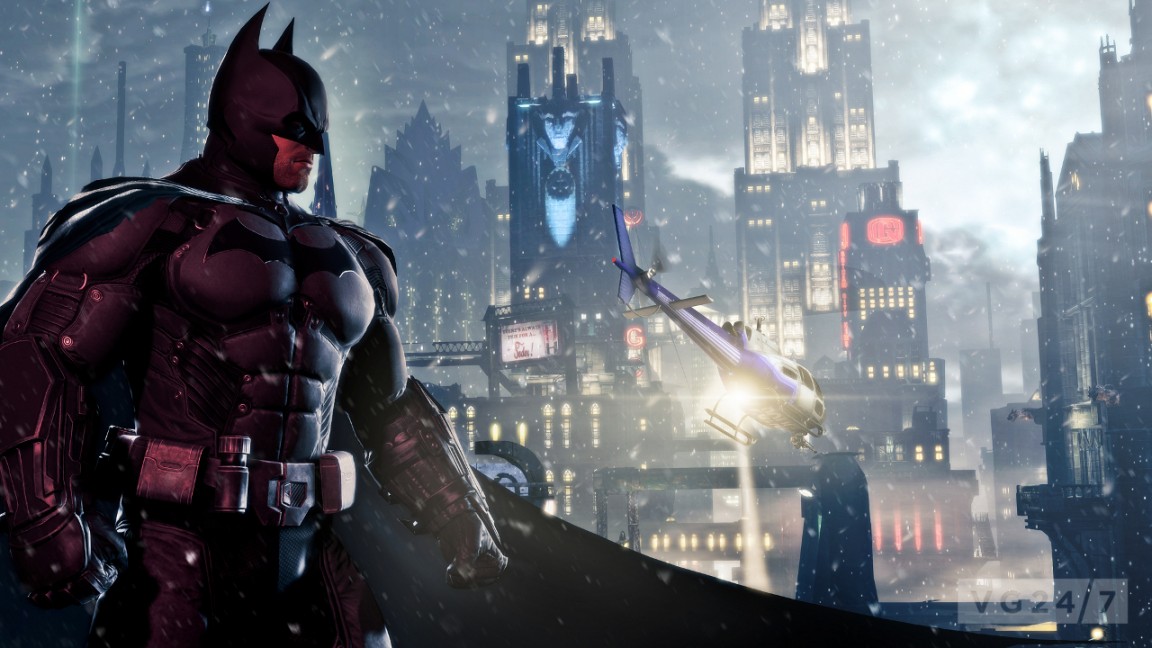 "Batman in the other games is very full," Holmes explained. "He's very completely formed. He is exactly as he is in the standard continuity, but going back to that earlier space he's a bit more vulnerable, a bit less complete, and so the things that happen in our story could really change who he is. So that's why I really got attracted to the prequel space and what I wanted to

He added, "We say it's roughly 'year two'. If you're a Batman fan the timeline doesn't add up a whole lot as it's been around for so long and there's been so many stories that to add them all end to end, he'd be very old. In Year One he's establishing himself. In 'year two' he's part of the Gotham landscape but he's not really understood yet. The mobsters think he's a myth - some of them do - but there are ones who know he's for real, who have met him and don't like him.

"These two guys stand for different things: Batman stands for justice. Gordon stands for law. They're very similar but they're not the same, so those two guys are in conflict for a lot of a story."

"The cops still consider him an outlaw. He's not a friend of the cops or a member of the institutions of Gotham, and one of the things I think this emotionally lends us is, Batman becomes scary when he's not understood. In the other games we've seen him referred to as 'Batman' by people. The guards in the asylum called him 'Batman' with a capital B as if that's his name, rather than the idea of someone who's 'the winged vigilante' or something that sounds more mysterious or scary."

Holmes added that the name 'Batman' is generally not used in the game, and that you'll get a real feel for how Bruce's actions and his urban legend status strike fear into the populace. This notoriety has caught the eye of ruthless mobster Black Mask, who has placed a $50 million bounty on Batman's head, drawing eight of the world's deadliest assassins to Gotham in a bid to claim the spoils.

Beneath the action and chaos lies a personal story that tracks the strained relationship of Bruce and his loyal aide Alfred Pennyworth. There is parental struggle at play here that paints the billionaire as a petulant child obsessed with his work, while his increasingly exasperated father figure tries to steer his master away from harm.

Indeed, the section I saw in Cologne opened with jet-pack toting maniac Firefly bombing the Gotham Bridge in an attempt to lure Batman out of the shadows. The scene opened with Alfred talking to Bruce over his radio, warning him that the attack was clearly a ruse and that he should refrain from getting involved. Stubborn as always, Batman ignores his friend's wishes and stealths his way around the bridge's struts and maintenance rooms in a similar fashion to the previous games.

Using vents and vantage points, Batman dispatches some Falcone goons using the series' combat mechanic which - while familiar to fans by now - looked no less impressive with age. One new addition to the player's arsenal is a pair of electrified gauntlets that can be activated for a quick power increase, letting Bats punch through enemy shields, charge up switches to access locked rooms and more. You can charge it up mid-battle by battering any thug holding a shock stick, which adds some combo strategy to the mechanic. 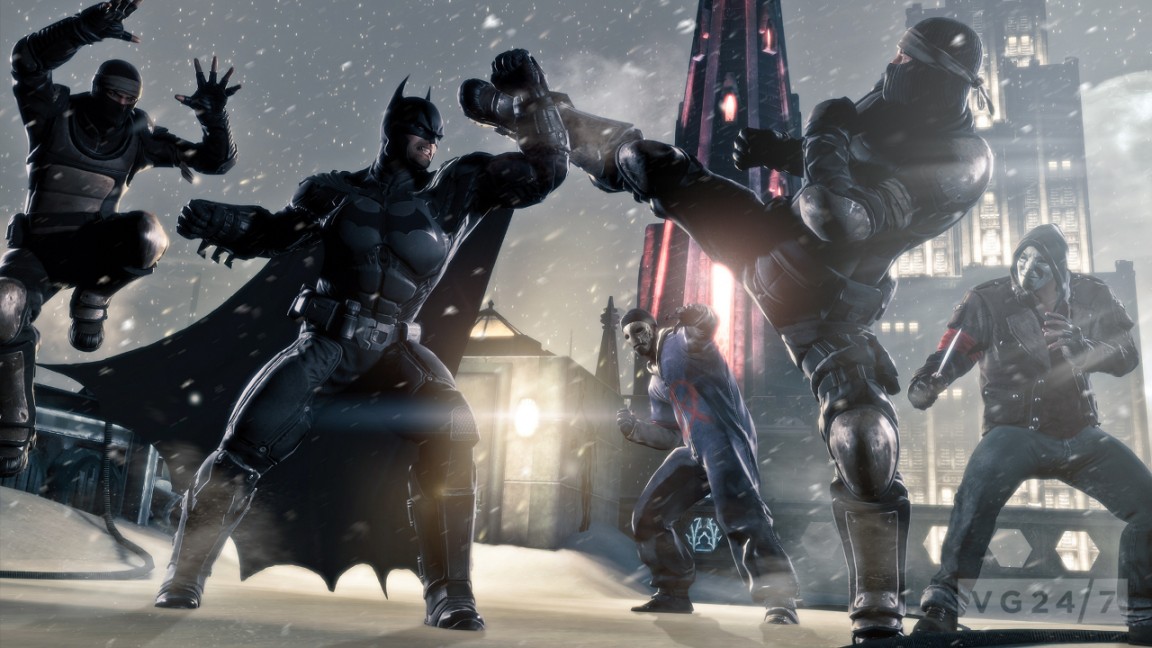 Players can also use the Bat-Claw to tether two enemies and pull them together, which results in a painful knocking of heads. After deactivating a series of bombs strewn across the bridge - and ignoring Gordon's warnings to stand down or be arrested - Batman encounters Firefly torching the surface with his flamethrower. After latching on to him with the Bat-Claw and flying off through the air, the demo comes to a close. It looked like a neat-set up to an insane boss battle. I wanted to see more.

Speaking of Gordon; Holmes explained that Origins will also delve deep into the would-be-commissioner's relationship with the Dark Knight, and his own fight against a police force that is as rotten at the core as Gotham's many mobs. "Without spoiling it too much, this is a big part of our story," Holmes revealed and added, "The Gotham landscape before he became commissioner was a very different place. it was corrupt, full of very bad cops who didn't like him and didn't trust him because he didn't take bribes, he wasn't one of the boys and he stood for things they didn't.

"The Black Mask is definitely the antagonist, as he's the guy who put the hit out and the guy Batman is pursuing. But I'm not going to tell you what The Joker is. I'll let you play the game and figure that out."

"These two guys stand for different things: Batman stands for justice. Gordon stands for law. They're very similar but they're not the same, so those two guys are in conflict for a lot of a story. We know where they end up but we don't know how they got there, so that's part of the theme of Arkham Origins."

With my campaign preview out of the way, I got a chance to play the game for myself, and I dived into a new mode called 1 vs 100. It's a survival mode that offers Batman and Deathstroke as playable characters. The aim is to simply defeat 100 thugs of increasing difficulty while trapped in a tiny arena. It's brutal and demands mastery of all facets of the game's combat mechanic. From removing enemy shields to deftly dodging knife swipes, you'll need to have razor sharp reflexes and discipline to survive long.

I'm being a hypocrite of course, because I only managed to defeat 22 enemies before Deathstroke fell to his knees. He's more weighted than Bruce, but what he lacks in speed he more than makes up for in range. You can alternate staff swipes that cut through enemies with a wide arc along with ranged pistol attacks to help manage crowd control. When swarmed you can also leap into the air and toss a cluster of proximity bombs to the floor, catching hapless goons off guard.

Even with Deathstroke's military-grade load-out to hand I still found this mode to be incredibly brutal. This is something for the Arkham aficionado for sure, and a way to test those who have grown accustomed to the series' brand of combat. Make no mistake; if you think you're shit-hot at the fighting mechanic already then I guarantee that you'll be humbled by this mode. It's a neat spin on the horde format that doesn't let up for a moment.

With palms suitable coated in stress-induced sweat and feeling a little shit at video games, my time with Batman: Arkham Origins came to a close. But I noticed a distinct lack of The Joker throughout the session. I asked Holmes to shed some light on just how significant his role will be.

"The Black Mask is definitely the antagonist," he replied, "as he's the guy who put the hit out, and the guy Batman is pursuing. But I'm not going to tell you what The Joker is. I'll let you play the game and figure that out."