Assassin’s Creed seems to have found itself again in the ancient world.

While the gameplay couldn’t live up to the premise of the first Assassin’s Creed adventure with Altaïr Ibn-La'Ahad, there’s no denying that the 12th Century Holy Land was a refreshingly different, and distant, setting. You’ve heard of the big names - Richard the Lionheart, Saladin - but it’s not a period of history that you tend to study in school, and outside of the grand strategy genre, isn’t somewhere we see all too often in games either.

But as Assassin’s Creed crept closer to home, closer to the present day, things started to feel less believable. The amount of famous faces you saw as an assassin, it was almost like fan service for historians.

“I remember working on Syndicate and you almost have a day-by-day account of what everybody did,” Marc-Alexis Côté, senior producer on Assassin’s Creed Odyssey, recalls. “And obviously you don’t have that in 400BC.”

Odyssey is still a who’s who of Classical Greece where you can meet people like King Leonidas of Sparta and Socrates. But where other Creeds have relied on caricatures of eminent people from the time, Odyssey leans much more heavily on original characters and the mythologised elements of the era. 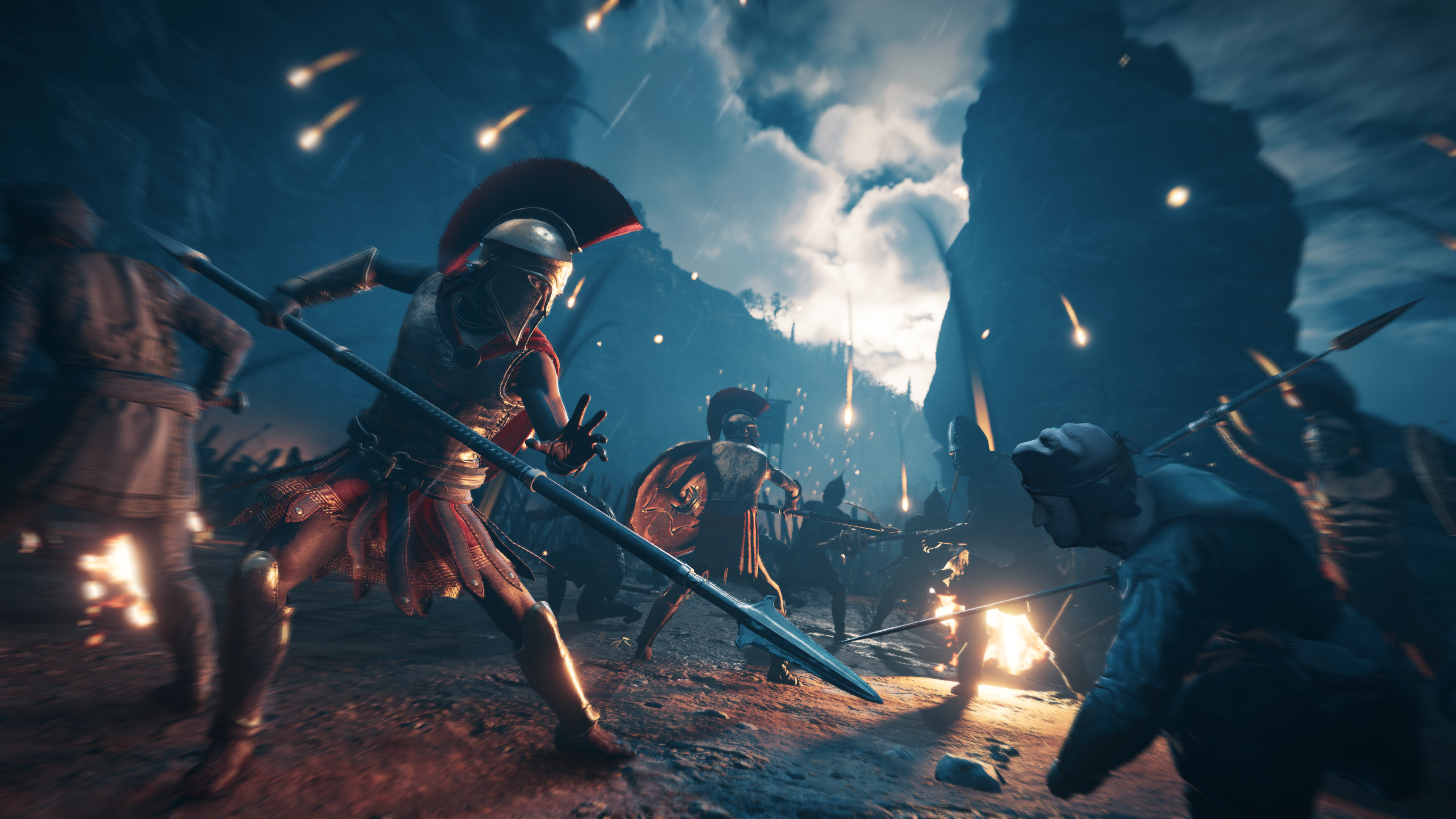 “If [mythological creatures] weren’t there it’d be very very sad, so rest assured that they are,” Côté says. “They’re really an intricate part of this world that we have created and have perfect explanations that will carry on in the history of the franchise as well.

“One of the cool things about Assassin’s Creed that I think our fans love is [that] we can explain history a different way. The Apple of Eden sums up this kind of reasoning very, very well - that’s why we are embracing the mythological creatures. Because they’re so much a part of this setting.”

Ubisoft’s adherence to trying to replicate history one-to-one felt dogged in Unity and Syndicate, especially when other areas of its games were lacking. This no doubt contributed to the perception that Assassin’s Creed was growing stale. One of the biggest lessons that Ubi seems to have learned from that time is that the best way to keep AC feeling fresh is to create original and interesting stories every time, rather than rely on familiar faces as a crutch.

“We’ve always used the excuse, ‘History is written that way, so that’s the way it should happen’,” Côté explains. “While we have found many other explanations for many other things through the power of the Animus, a game is not a movie - the minute you push up on a thumbstick you’ve made a decision to move left or right. We shouldn’t hide behind the excuse that that’s the way history happened - you’re making decisions every second you’re playing a game.

“When we starting building Odyssey - I’ve been working on the franchise for what feels like most of my career now - one of the things that I’ve always felt that we’ve lacked - not to pass judgement on our past games which I’ve been a part of - we’ve lacked agency in these games.”

To try and give players that agency, Assassin’s Creed Odyssey features branching dialogue choices that don’t just affect your relationships with characters, but trigger set-pieces in the game-world and unlock new storylines. But it’s not quite as transparent as having a choice between coddling someone’s ego or punching them in the face - options can have unexpected results, and you have to try and read other characters’ intentions to get the best out of them. 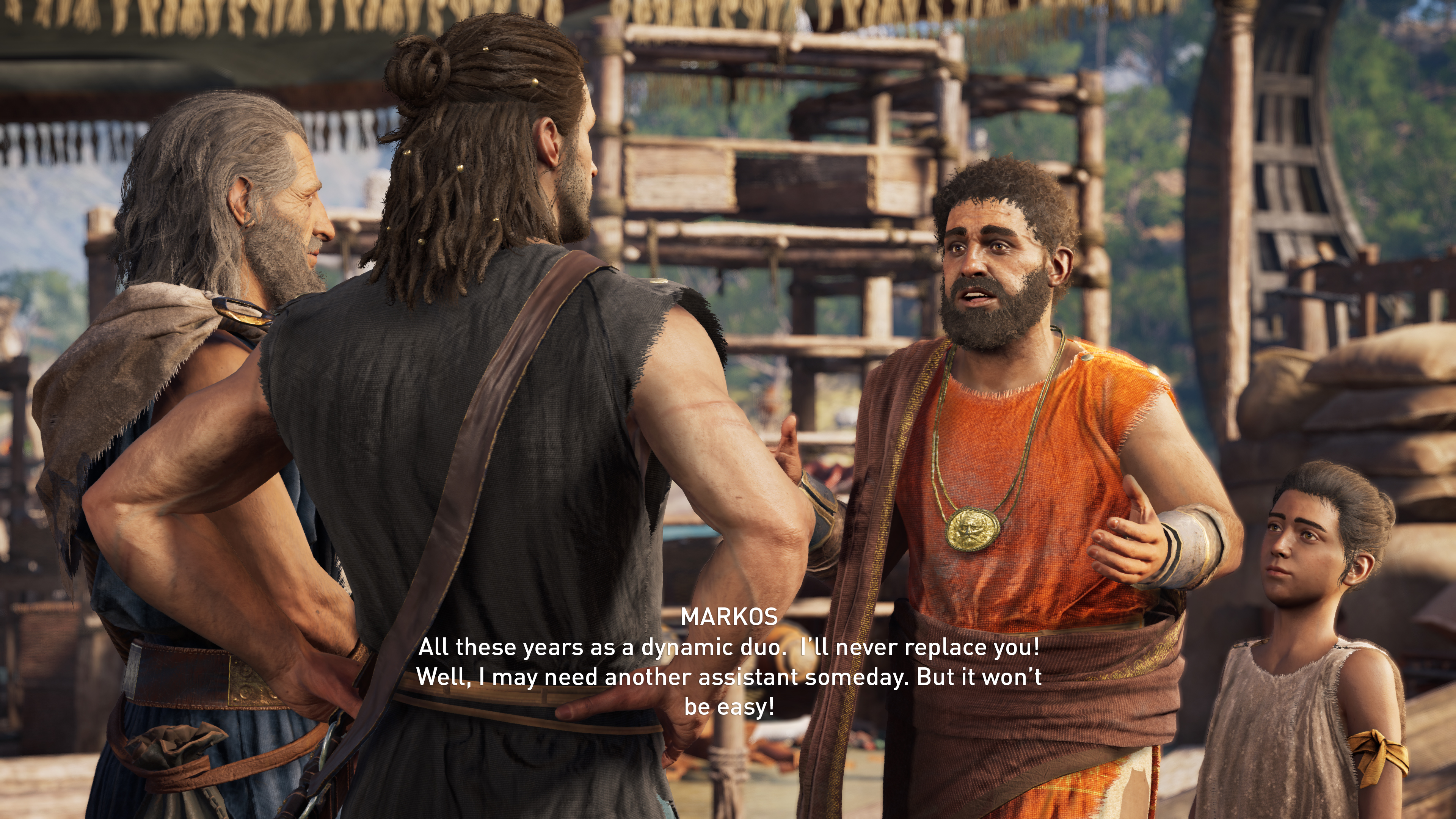 “Depending on what you answer, it may lead to an entire quest line down the road,” Côté says. “We’ve taken the approach where we don’t tell you you’re about to make an important choice. We tell you at the beginning to be careful about the choices you make because they may have - we don’t promise anything - an impact.

“We try to keep this very blurry so players are always looking for the consequences of the actions they’ve taken.”

Ubisoft Quebec is confident in the new direction it’s taking with Assassin’s Creed. By blending RPG mechanics and loot with the best systems it’s created over the series’ lifespan, the developer is trying to strip out the busy work that bogged previous games down. But if Origins was a refresh for the series, then Odyssey is the difficult second album - back on the yearly cycle with a point to prove, hoping it won’t repeat the mistakes of the past.

“We try to make things have meaning. For better or worse, you will not have horse races for example. We’ve tried to make everything make sense in the life of a mercenary. It’s there for you, it’s built around this character and it’s there to add value.”

Assassin’s Creed Odyssey is out for PC, PS4, and Xbox One worldwide on October 5.

For more on the latest Assassin’s Creed, check out our preview from the first six hours of the game.